Climate change, Toxic Floodwaters (TFW), and communities of color—what do they all have to do with each other? For the James River Watershed: a dismaying intersection, covered in a recent report highlighting the risk of climate-induced Toxic Floodwaters on communities of color in Virginia. TFW refers to flooding caused by storms or climate-related events that carry harmful contaminants into local waterways. This report emphasizes TFW from industrial facilities that carry contaminants like toxic heavy metals, oils, and gas.

Using a three-pronged approach, the authors depict the relationship between the geographical location of industrial facilities, flooding risk, and data on social vulnerability of communities surrounding the facilities. The report places emphasis on communities identified by the Center for Disease Control (CDC) as “high in social vulnerability to disaster,” which bear a disproportionate share of toxic floodwater risks and pollution burdens in their communities. Geospatial mapping technology was used to display the ways in which industrial facilities are exposed to flooding risk, overlayed with CDC demographic data on race, socio-economic status, and the proximity of these neighborhoods to old industrial facilities. 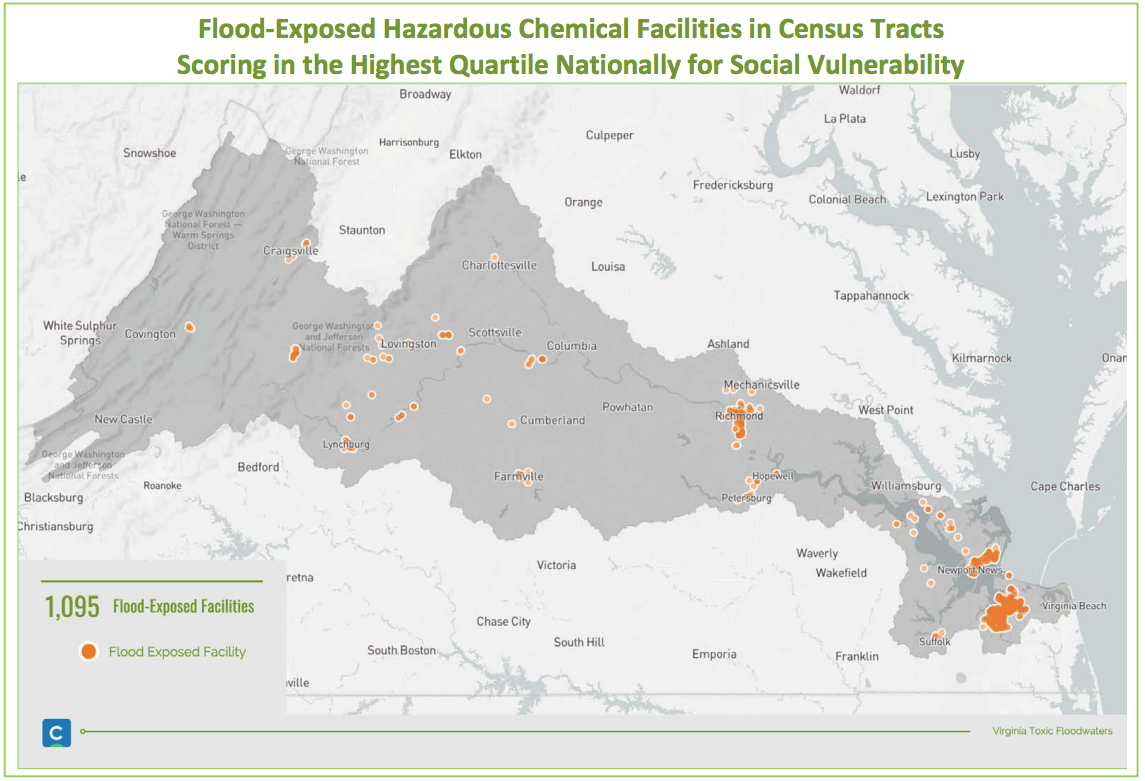 A few significant key findings from the research conducted by James Riverkeeper and partners include the following:

Referencing the high profile Hurricanes Harvey and Florence, and concern regarding inequity of disaster response, Jamie recounts what drove this project: “Hurricane Harvey and Florence really shined a light on the enormous risks posed by storms and how ill-prepared we are to combat them. Communities that are living below the poverty line may lack access to transportation or resources to help themselves when storms hit. Hampton Roads is experiencing the highest level of sea-level rise on the east coast and we need to think about how to help our most vulnerable communities facing toxic floodwater risks.”

The public health ramifications from TFW are especially pernicious. Residents in North Carolina and Texas suffered deleterious health problems after hurricanes Florence and Harvey including headaches, dizziness, and irritation to the eyes and throat.

The Center for Progressive Reform and James Riverkeeper are actively working to combat threats from TFW, starting with some of the recommendations summarized in the report. For instance, urging the Virginia DEQ to investigate whether the risk of flooding is included in a facility’s pollution or spill-prevention plan as required under the Clean Water Act or the Clean Air Act’s Risk Management Program; improving public access to information from Virginia’s environmental regulators regarding chemical hazards; and making sure Virginia regulators require facilities to comply with hazardous chemical reporting requirements while maintaining transparency with local first responders and emergency planners. A key recommendation of the report is for Virginia lawmakers to establish a new program creating siting, construction, and monitoring standards for above-ground chemical storage tanks – these significant hazards are currently unregulated under state law.

Finally, the report calls on the Virginia General Assembly and Governor to fund a task force to look closely at the risks and ramifications underserved communities are subjected to as a result of TFW, and start making recommendations as to how this can be addressed on a local and statewide level. Enhancing transparency and helping communities prepare for these risks is a core goal for James Riverkeeper: “James River Association can play a part in helping these communities understand risks. People deserve a voice on this issue and access to information  about these facilities in their backyards.”

As threats from climate-induced storms increase in frequency, it is essential that the most climate-threatened communities are included in disaster preparedness planning now. The proximity of old industrial and chemical storage sites to vulnerable communities in the James Watershed, compounded by climate-related storms yields a precarious situation with potentially catastrophic outcomes, like the pollution spills in Texas and North Carolina during Hurricanes Harvey and Florence. James Riverkeeper is working tirelessly to prevent the same outcomes from transpiring in the James watershed. Read more about toxic floodwaters and strategies to help prepare Virginia in the full report here.