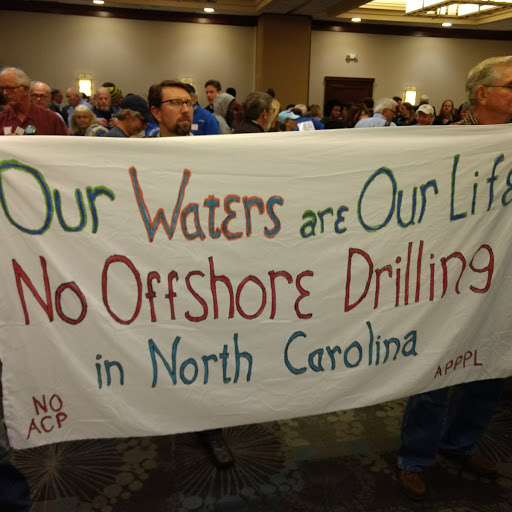 Crystal Coast Waterkeeper Larry Baldwin believes you deserve to know the truth about seismic testing and offshore drilling. Larry knows how dangerous seismic testing and offshore drilling on the North Carolina Coast would be for his community and he won’t stop educating and advocating until the entire North Carolina coast and their elected officials know it, too, and a permanent ban is accomplished.

Seismic testing is the process of sending incredibly powerful blasts into the ocean to discover new oil and gas reserves offshore. The blasts produce one of the loudest noises in the ocean, and repeat approximately every 10-12 seconds for multiple days, weeks, or even months. The noise increases mortality rates in countless ocean species and significantly reduces catch in the fishing industry.

If oil is discovered, offshore drilling exposes the coast to additional harms and dangers. Offshore drilling risks deadly explosions like Deepwater Horizon and ongoing oil spills like the Taylor Energy leak – harming ocean wildlife, the fishing industry, and tourism – all for approximately four months of profit and irreversible contributions to our already rapidly warming atmosphere and changing climate.

“These local issues capture the diverse concerns of coastal North Carolina’s diverse communities. The fishing industry, for example, crosses every social, racial, and income boundary on the North Carolina coast; low-income communities and communities of color will face the largest impacts when the fisheries are negatively impacted and costs of seafood rise. Additionally, businesses that rely on income from real estate and tourism will be negatively impacted when recreational fishing declines and the beauty of the coast is destroyed.” – Larry Baldwin, Crystal Coast Waterkeeper

Crystal Coast Waterkeeper’s initiative involves elements of research, education, and advocacy. The organization focuses on gathering information and data from experts and partners to prove the potential harm from seismic testing and offshore drilling practices, educating the community through public meetings and social media, and engaging local citizens in advocacy through letter-writing, speaking at public meetings, sharing petitions, and more. Crystal Coast Waterkeeper works with partners such as Oceana, Don’t Drill NC, and North Carolina League of Conservation Voters.

Crystal Coast Waterkeeper’s education and outreach culminated in a five-part film series titled “Seismic Truth,” in which local citizens explain their opposition to fossil fuel exploration and extraction on their coast. Watch the first one, featuring young people worried about the future of their coast.

Their messaging and strategy are working. Over 600 people attended Crystal Coast Waterkeeper’s nine screenings, rallies, and meetings for this campaign. They’ve sent over 1200 letters to their local, state, and federal agencies. Their films have over 16,000 collective views and they’ve reached over 45,000 people. Over 25 municipalities have adopted resolutions opposing seismic testing and offshore drilling in the area where Crystal Coast Waterkeeper works. Only one municipality has yet to adopt such a resolution.

Meanwhile, Larry and Crystal Coast Waterkeeper steadfastly push back, with ever-increasing support from the citizens and officials of the North Carolina coast on their side.