Would N.C.’s Hog Operations Treat Neighbors Better if there were McMansions Next Door? - Waterkeeper

Would N.C.’s Hog Operations Treat Neighbors Better if there were McMansions Next Door? 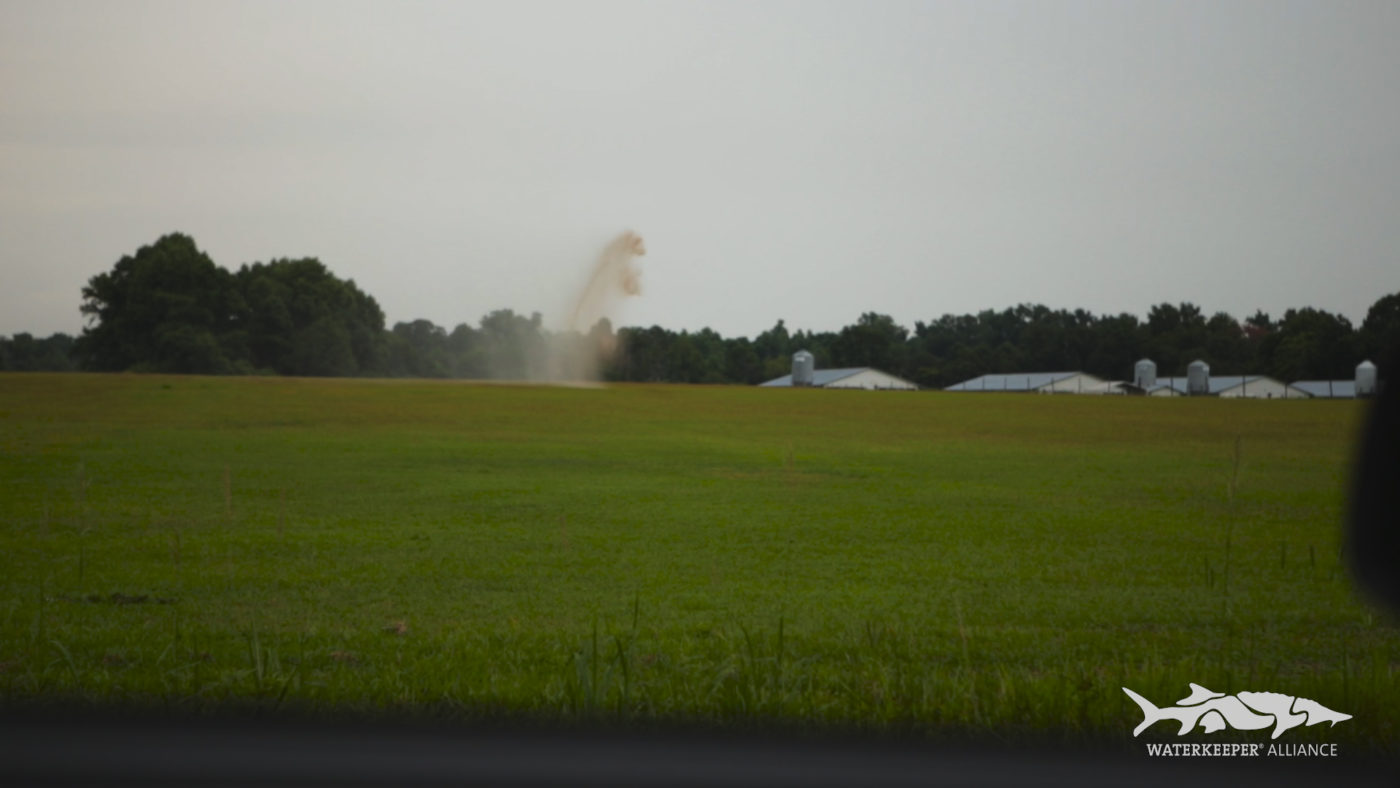 J. Harvie Wilkinson III, a judge for the U.S. Court of Appeals for the Fourth Circuit, looked at his crowded courtroom, and spoke from the heart. “If this were my property I’d be outraged at some of these conditions that were allowed to persist.”

Judge Wilkinson was talking about conditions experienced by the neighbors of industrial hog operations, neighbors who live with the unbearable stench of hog waste, with well water contamination, with particulates of hog feces that blow into their homes (see photo, above, of a North Carolina operation spraying waste).

Some of those neighbors have sued over the conditions they’ve been forced to live with, and they’ve won five federal nuisance lawsuits against the hog operations, which can house thousands of pigs at once.

The company that controls the operations, Murphy-Brown, the pork producing subsidiary of Smithfield Foods, is appealing those decisions at the Fourth Circuit Court of Appeals; Judge Wilkinson is part of a three-judge panel hearing that appeal.

Judge Wilkinson, who once ran for Congress on the Republican ticket, spoke during oral arguments in the case earlier this month. He was clearly uneasy.

“Less fortunate citizens have property rights, too,” he said. “They have a right to good health and enjoyment of their property. If this were some McMansion surrounding hog farming operations, or houses of the affluent and more politically powerful were here, wouldn’t these conditions have been cleared up sooner rather than later? That is my problem.”

The plain fact is that the hog industry hurts people — and it hurts some people more than others.

North Carolina’s industrial hog industry has a disparate impact on African-Americans, Latinos, and Native Americans. In areas of North Carolina with more than 80 percent people of color, more than a quarter of the population lives within three miles of an industrial hog operation. Adjusted for rural conditions, the standard steady live weight of hogs within three miles of a neighborhood increases by 100,000 pounds for every 10 percent increase in people of color.

As Judge Wilkinson said, the people who live near hog operations live with conditions that wealthier people aren’t asked to tolerate.

As part of one of the nuisance suits, Shane Rogers, a professor and researcher at Clarkson University, tested the land and exterior walls of 17 homes near a Smithfield Foods contractor; 14 of those homes tested positive for pig2bac bacteria, a marker for pig manure.

“It is far more likely than not that hog feces also gets inside the clients’ homes where they live and where they eat, Rogers testified.

Pathogens from hog waste also travel through the sandy soils of the coastal plain, which poses another danger, since half of all hog operations are in census blocks where 85 percent of households depend on well water. High nitrate levels from contaminated well water is a health hazard, causing blue baby syndrome, which can be deadly.

That’s not the only hazard facing babies and children who live near industrial hog operations.

The North Carolina Department of Health and Human Services conducted a statewide respiratory health survey project during the 1999–2000 school year, in which more than 58,000 adolescents in the state answered questions about their respiratory symptoms, allergies, medications, socioeconomic status, and household environments. The finding: The closer children live to an industrial hog operation, the greater their risk of asthma symptoms.

The plain fact is that the hog industry hurts people — and it hurts some people more than others.

As Judge Wilkinson said, “Yes, the hog farming certainly provides many jobs in eastern North Carolina. It’s important to the economy and national food supply. But it’s harmful to the people who live nearby. It’s got to be environmentally harmful to the waterways.”

We know it is.

We also know that Smithfield Foods, a $15 billion multinational company that owns or contracts with almost all the industrial hog operations on the coastal plain of North Carolina, can afford to manage its waste in a way that protects its neighbors.

The technology is there; all North Carolina needs is the political will to demand the company and its contractors use it.