We have technology to manage hog waste better. We need to use it - Waterkeeper

We have technology to manage hog waste better. We need to use it

North Carolina Gov. Roy Cooper’s Hurricane Florence Recovery Recommendations included $75 million to either buy out industrial animal operations in the 500-year floodplain or help them, in the words of the report, “convert to better technology.”

The pork industry has been adamant that no such technology exists. But it does.

Even after 36 open cesspools of swine waste flooded during Hurricane Florence, the industry stuck to its line that keeping hog feces and urine in open cesspools — even when those cesspools sit in a floodplain — then spraying the unprocessed waste on adjacent cropland — even if droplets of manure and urine blow through neighbors’ windows — was the best it can do.

In the aftermath of Florence, Kraig Westerbeek, Smithfield Food’s director of renewables, told The New Yorker that none of the technology investigated under a $17.1 million agreement in 2000 between the industry and the state “met the criteria for operational and economic feasibility.” 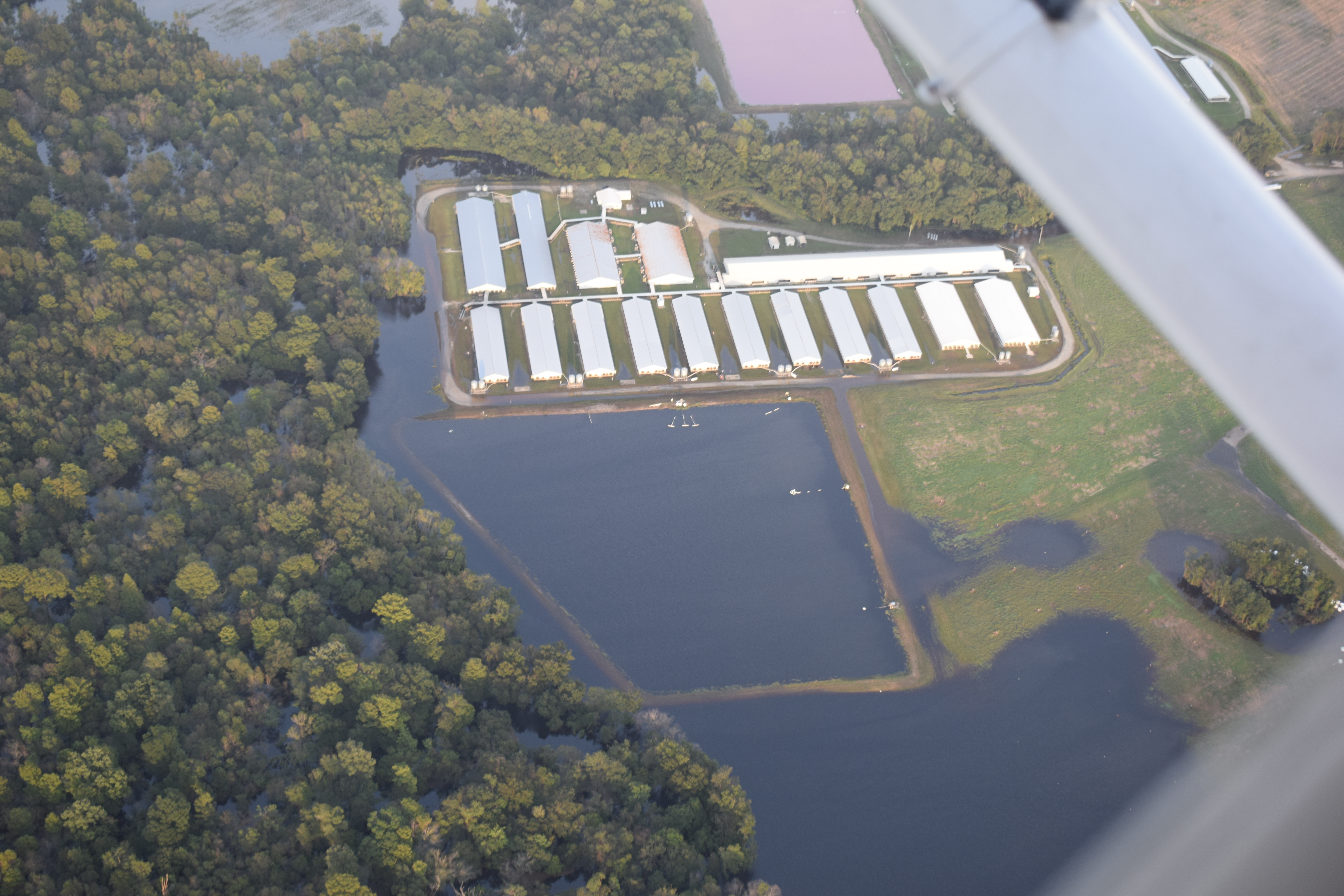 But that process, nearly ten years ago, did identify technology that met all the environmental criteria for new farms. It determined, however, that retrofits to existing farms were too expensive.

A report this week from Pro Publica says that the agreement itself was too flawed to create meaningful change.

The agreement, “sought transformative change, but lacked teeth,” Pro Publica reported. “The all-or-nothing strategy meant that unless a perfect system was developed, nothing would change. The deal required the ‘substantial’ elimination of odors, ammonia emissions, bacteria, soil and groundwater contamination, and waste discharges, yet it did not state what that threshold was or what costs the industry was obliged to absorb.”

The costs to neighbors from odors, pests and other nuisances were not factored into the economic analysis, a fact panel member Richard Whisnant lamented at the time.

“In the end, the agreement let legislators avoid the messy work of defining restrictions for a politically influential industry, and instead it shifted that responsibility to academics,” Pro Publica reported. “When no silver bullet emerged from the early research, the push for change waned as the country faced a staggering recession and North Carolina’s politics shifted rightward.”

Rather than solve the problem, the agreement gave Smithfield political cover to insist to the North Carolina legislature that its “lagoon and sprayfield” system, where waste from cesspools is sprayed on nearby crops, was the best practice.

“There is not a technology in North Carolina that performs better than a lagoon and sprayfield,” Gregg Schmidt, Smithfield’s president of hog operations testified in June during a nuisance trial, which Smithfield lost.

Smithfield appears to have had a change of heart, deciding that there is better technology. It announced this week that it would cover hog cesspools and add anaerobic waste digesters, entering the biogas market in a $250 million joint venture with Dominion Energy.

But covers alone don’t qualify as environmentally superior technology under the 2000 agreement,  because they do not solve the groundwater, surface water and air quality problems created by lagoons and sprayfields. While we believe addressing climate change is important, so is addressing long-standing problems affecting North Carolinians every day.

The good news is that there is technology that can help process waste in ways that safeguard the environment. And it’s being used around the country, including in North Carolina.

Like all technology, waste technology gets cheaper with each new iteration. Early components are often expensive, since they have to be specially built, or adapted from other uses. For instance, one pilot project used a medical-grade membrane to capture ammonia, because that was all that was available. If the technology were adapted for wider use, there would be a market for similar, cheaper, materials that don’t meet expensive medical standards.

In another case, a pump component from the wastewater treatment industry clogged with hog bristles when used at an animal operation. That’s the kind of expensive mistake engineers working on new technology only make once.

This cost decline was illustrated during technology trials under the Smithfield agreement. The first generation of Terra Blue technology, for instance, cost $400 per 1,000-pound state live weight of hogs; the third-generation cost just $158.62, as of 2013.

“The research has moved the needle to getting the cost down to where it can be affordable,” C. Mike Williams, who oversaw the research done under the Smithfield agreement, said in a 2016 presentation at Duke University.

Another flaw with the price argument: It takes into account only the out-of-pocket costs of waste management to the grower. In 2004 those were $87 per 1,000 pounds of steady-stream live weight hogs.

The real costs — to the air and water in the surrounding area, and the health of the neighbors — were much higher.

The current system “has served its purpose,” Williams told Pro Publica, “and we need to move to a new technology.”

What follows is a list of some of the waste technology available, all of which has been tested in North Carolina, most under the 2000 agreement.The list isn’t exhaustive, nor is it an endorsement of any specific technology. Rather, it’s meant to illustrate that technology exists, for use in North Carolina and around the country, that can manage animal waste in ways that don’t foul our water and air. 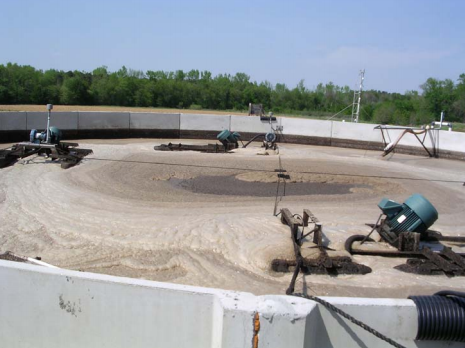 Sequencing Batch Reactor
Farm: 4,320 head feeder-to-finish operation in Wilson, NC
Cost: $221.43 per 1,000 pound steady state live weight hogs
Process: Sequencing batch reactors have been used to treat municipal wastewater since 1914. In this system, wastewater from hog operations was added to a single “batch” reactor, which treated 40,380 gallons of wastewater a day using intermittent aeration to cycle between processes that include oxygen and processes that have no oxygen. About 9,500 gallons of sludge were removed from the reactor daily and added to existing lagoons. 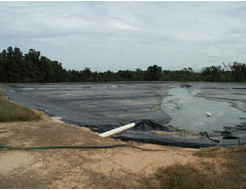 Ambient Temperature Anaerobic Digester and Greenhouse
Farm: 4,000-head farrow-to-wean operation in Zebulon, North Carolina
Cost: $89 per 1,000 pound steady state live weight hogs
Process: The ambient digester has an impermeable cover over an in-ground digester;  methane gas produced during the digestive process is extracted and delivered to a generator, where electricity is produced for use on the farm. Unlike technologies that merely cover the lagoon to generate energy and continue spraying most of the waste onto fields, this system included a nitrification-denitrification system to address nutrient pollution; the majority of the wastewater is routed to greenhouses for vegetable production. 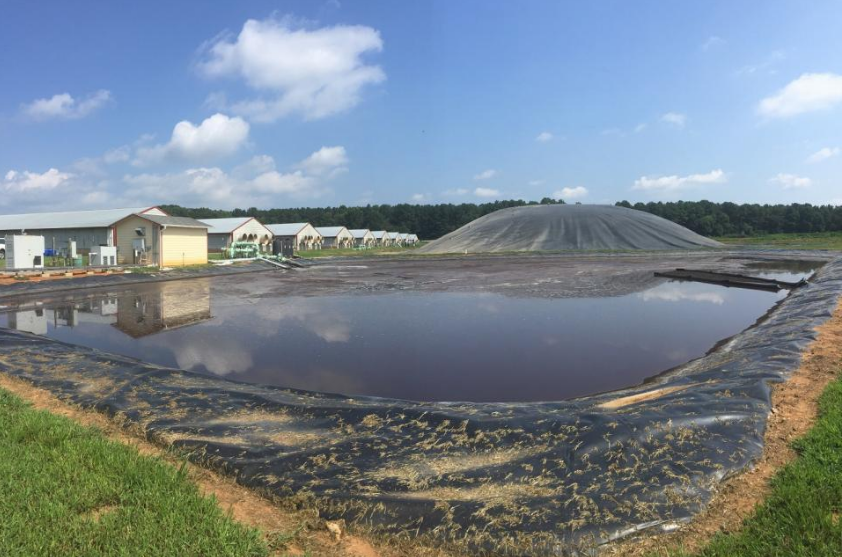 While Smithfield has long insisted that it can’t bring in environmentally superior technology to its operations, it has invested in technological improvements in response to legal action in states other than North Carolina. “Successful Farming” headlined an article about Missouri’s Premium Standard Farms “How Smithfield Saved the Worst Hog Farm in America.”

Crystal Peak Fertilizer
Farm: Premium Standard Farms; 11 Missouri swine operations with a total of 70,000 hogs
Background: A 1999 consent judgment with the state of Missouri required the farm to set up a $25 million capital improvement fund and move from the cesspool and sprayer system to next-generation technology.
Process: Internal recirculation units use screens to separate solid waste. Separated liquids are acidified with sulfuric acid to minimize odor and ammonia, and are used for flushing fresh manure out of the barn. Concentrated solids are transferred to a digester. Solids go into a centrifuge, where liquids and solids are further separated. The solid waste is dried to be used as fertilizer. Wastewater is treated for use in irrigation or for animal feed.