There’s an old expression in Montana: “Whiskey’s for drinking, and water’s for fighting.” Leading that fight as Upper Missouri Waterkeeper is Guy Alsentzer, who oversees a massive watershed totalling 25,000 square miles, roughly the size of West Virginia. The Missouri River is the longest river in the United States. Alsentzer’s journey to Montana was just as long and winding.

Alsentzer grew up in rural Pennsylvania and attended college across the country at Pepperdine University in Malibu, CA. It was there, during an inopportune surfing session, that he realized the urgent need for clean water.

“I was always out surfing in the Pacific, but I didn’t know that in California, when you have a red tide, you don’t go swimming. So I got a MRSA staph infection in my leg that I had to have cut out. It could have killed me,” says Alsentzer. “As a very practical matter, Los Angeles County, like most of California, has not dealt with mandatory upgrades to the wastewater facilities, when it comes to capacity and treatment, and they literally dump it illegally into the ocean.”

Alsentzer attended a Santa Monica Baykeeper (now Los Angeles Waterkeeper) meeting where he was ‘shown the light’ about the work of advocacy. From there, he refocused his studies at Pepperdine to environmental studies. After graduation, he traveled back east to Vermont Law School so he could be equipped to fight for the things he loves. With the Great Recession in full swing, however, Alsentzer took a job in his home watershed with Lower Susquehanna Riverkeeper, where he worked on the landmark Chesapeake Bay total maximum daily loads (TMDL) case, the emerging shale gas fracking battle, and holding industrial polluters accountable. After three years in the Chesapeake, Alsentzer made his way to Montana’s high mountains and one of the last intact, truly wild places in the lower 48 states. 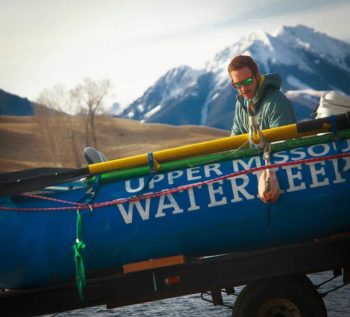 “Not only did I care about and feel compelled to protect this region. But I also recognized there was no other entity in this part of the country actively using science, the law, and citizen action to create a vision for a better future for waterway health,” says Alsentzer. “Montana has some awfully compelling landscapes and they deserved a strident and unrelenting advocate.”

Somewhat surprisingly, Alsentzer’s work at Upper Missouri Waterkeeper has not been entirely celebrated at the local level. It’s been branded as controversial, even egotistical. After all, water in Montana is for fighting. He cites the state’s rugged individualism and generational sense of entitlement of those who think they “own the water” as part of the problem. A lack of education is also a challenge, but so too is a state government that doesn’t always enforce the laws.

“When I founded Upper Missouri Waterkeeper and assessed the state’s pollution control programs, I discovered we weren’t even doing the bare minimum. We weren’t enforcing the Clean Water Act,” says Alsentzer. “The Department of Environmental Quality in Montana was pretty much corporate captured by the polluters. They were just rubber-stamping everything.”

One of Upper Missouri River Waterkeeper’s biggest victories was stopping an indefinite nutrient pollution exemption scheme for polluters. Montana was heralded as a national leader in 2015 when it adopted numeric nutrient criteria to better protect the health of its rivers and streams. Numeric nutrient criteria are mathematical expressions of the concentrations in nutrient pollution that a waterway can receive and remain healthy; most states across the country have failed to adopt such criteria, despite 20 years of urging by the EPA. In Montana’s case, however, the State also adopted categorical “variances” that exempted every polluter, in every sector across the state from ever actually meeting those criteria. It took about five years and entailed ‘nothing more than grit, science, and the law’, but Upper Missouri Waterkeeper received a precedential federal court victory in 2020 that stopped a blatant giveaway to polluters and reprioritized science at the heart of pollution control law in Montana.

Another focus area for the organization has been fighting to protect the blue-ribbon trout fishery, the Gallatin River, from the ritzy Yellowstone Club’s unchecked development. But they are fighting unsustainable development all over the watershed.

“We are the only Montana NGO looking at using classic legal enforcement strategies, impact litigation, and citizen action to curb sprawl in the literal headwaters for the Nation’s longest river system,” says Alsentzer. “There’s a right way and a wrong way to grow: if we’re going to grow, let’s grow guided by science, instead of becoming a zero-sum game where the river is the loser.”

Alsentzer is also putting pressure on Montana Governor Greg Gianforte to form a task force to better understand why the state’s world-famous cold water fisheries are suddenly crashing.  In the last three years scientists have documented emerging nutrient pollution problems, severe water withdrawals nearly dewatering rivers, and wild brown trout fisheries plummeting to all-time lows. Though, so far, the Montana governor has refused to wrestle with these problems and instead turned a deaf ear.

To be clear, this advocacy goes way beyond an aesthetic love of wildlife. Trout fishing is real business for Montana, responsible for nearly $1 billion annually to the state economy. All told, the outdoor recreational industry is responsible for about $6 billion annually to the state economy. But, to hear Alsentzer say it, that could all go away in the next few decades.

“Most people come to Montana and think it’s pristine. The scientific reality is that we also have problems, even at the headwaters: we have total maximum daily loads (TMDL) on our rivers, we have nutrient pollution, we have dewatering, we have sediment and thermal pollution. Climate change is exacerbating all these impacts,” says Alsentzer. “If you truly care about some of the Lower 48’s last wild places, people need to understand that we are at risk and front and center for how climate change, population pressure, and unsustainable water rights will play out in the Northern Rockies.”

Despite the old saying about whiskey and water, Alsentzer believes water could actually be a unifying issue. It’s certainly something everyone needs. At the very least, he hopes people can reconsider how we use water.

“I’m not a politician. I’m simply saying we deserve a better vision, and a better future, for some of the last intact ecosystems in the United States,” says Alsentzer. “I’m fighting for a vision and a future that I want my kids to know, and healthy landscapes and waterways that I want future generations to have a chance to experience.”