Regional entity Waterkeepers Florida came together early February for an in-person board meeting to set goals for the 2019 Florida legislative session. They gathered at the 25th Annual Public Interest Environmental Conference at the University of Florida Levin College of Law in Gainesville and used the opportunity to educate attendees about the problems facing Florida’s waters and further coordinate on responses to statewide environmental legislation. Before the three-day conference was over, they’d also drafted a letter to newly instated Governor DeSantis, asking for increased protection for the state’s waterways and offering their expertise to the policy problems.

“The Florida Waterkeepers have been working for years to protect our state’s waterways,” said Jen Lomberk, Matanzas Riverkeeper. “We all work extremely hard to focus on the issues in each of our watersheds, but water does not abide by political boundaries, so it was clear that we need statewide coordination to tackle the broader issues at the state level. We represent more than 15 million Floridians who live, work, and play in our watersheds. The Waterkeepers Florida regional entity provides us the opportunity to formally leverage our collective statewide voice for our waterways.”

Unfortunately, each of the 13 members of Waterkeepers Florida can attest to the wide variety of threats to the state’s waterways. “Florida waters are at a tipping point due to unbridled growth, sea level rise, and pollution fueling toxic green algae and red tide. Now is the time for Waterkeepers Florida to formally unite efforts to fight for the waters we love,” said St. Johns Riverkeeper Lisa Rinaman.

In their letter to Governor DeSantis, Waterkeepers Florida highlights harmful algal blooms, caused by agricultural pollution, which hurt the tourism and fishing industries. They also face continued threats of pollution from other sources including power plants, sewage leaks, and litter. And, as with the whole United States, the Waterkeepers of Florida face the possibility of a weakened federal Clean Water Act that would make it harder to hold polluters accountable. 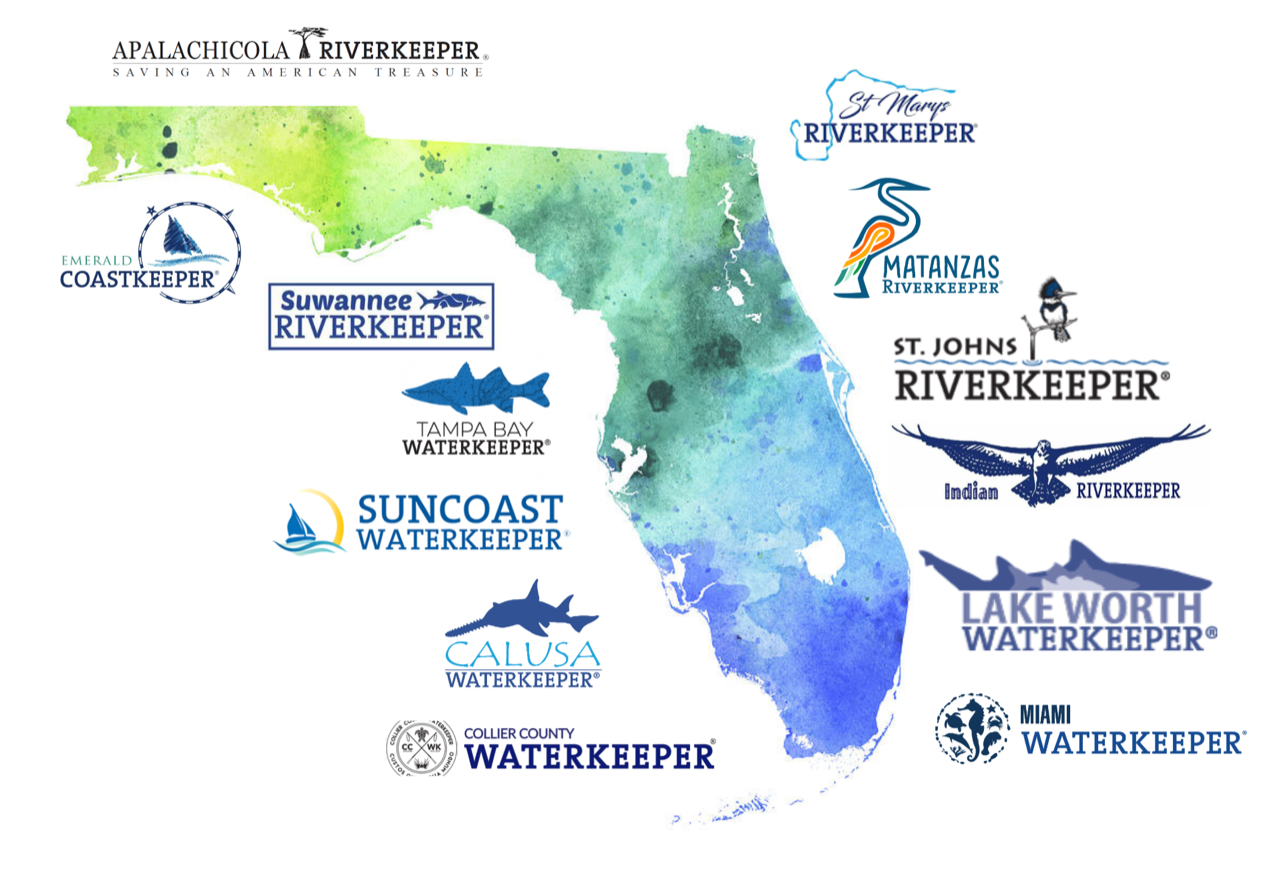 As one of their first actions as a Waterkeeper Regional Entity, Waterkeepers Florida wrote and signed A Resolution Against Phosphate Mines in Florida. They joined several other environmental groups in opposing these mines and the impacts of their toxic byproducts including radon and uranium, effectively highlighting a lesser-known danger to Florida waters. Waterkeepers Florida is now waiting for Bradford County, Florida, to schedule public hearings, where they plan to continue to fight new phosphate mine permit applications.

Additionally, “each of our watersheds is experiencing the impacts of climate change.” Kelly Cox, Staff Attorney at Miami Waterkeeper, emphasized that “in South Florida, we are already seeing wastewater systems fail because of rising seas and water tables. Our oceans are acidifying and our marine ecosystems are burdened by increased water temperatures. Climate change exacerbates storm impacts and exposes vulnerabilities in our coastal infrastructure. Together, with Waterkeepers Florida, we are taking a holistic approach to addressing these current impacts and planning for future ones.”

Waterkeepers Florida looks forward to future coordinated efforts for the protection of Florida waters. Their plans include following their letter to Governor DeSantis with a meeting and more specific asks regarding his Executive Order, Achieving More Now for Florida’s Environment, and a letter to First Lady Casey DeSantis responding to her stated commitment to swimmable and clean waters. They plan to follow the relevant proposed bills in Florida’s legislature and begin to collectively document evidence of climate change on each of their watersheds.

Florida’s waterways are some of the most biodiverse and threatened in the United States. Thankfully, Waterkeepers Florida remains active and committed to their protection. Lisa Rinaman agrees: “Florida Waterkeeper groups have been working well together for a long time. Now that we’re formally organized a state level, we’ll be even more impactful.”