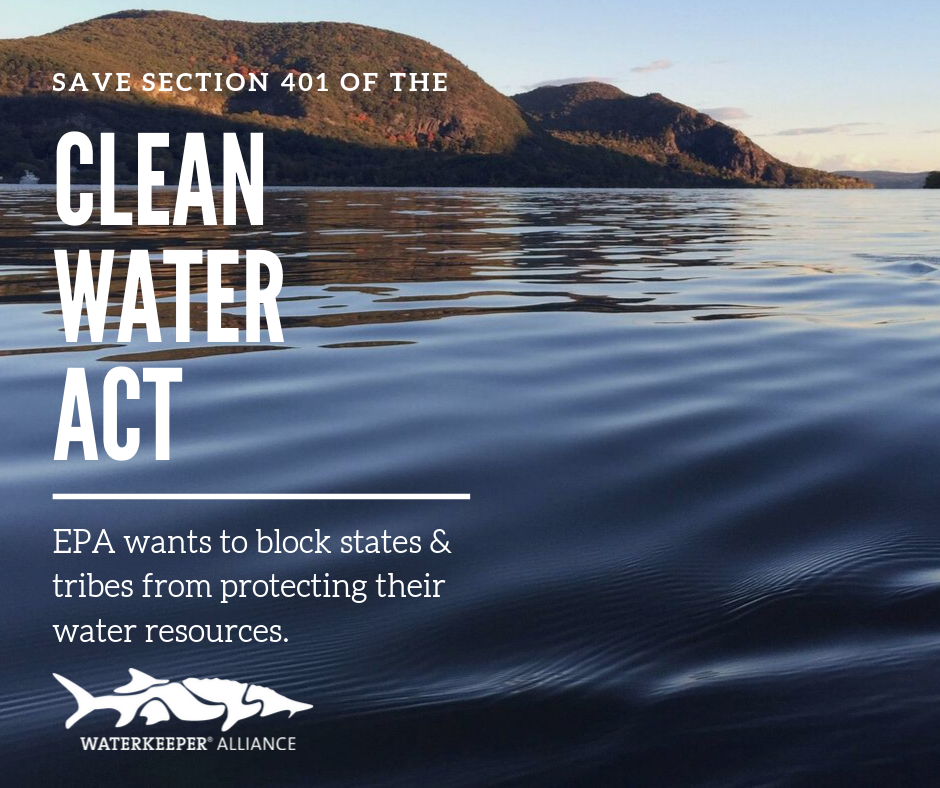 Waterkeeper Alliance and 148 Waterkeeper groups today submitted comments in opposition to the U.S. Environmental Protection Agency’s (EPA) proposed revisions to its regulations that administer section 401 of the Clean Water Act. EPA’s proposed rule is a bald-faced effort by the administration to steal state authority granted by Congress from the States and to misappropriate it for itself and other federal agencies.

The proposed revisions would dramatically alter, limit, and reduce the “scope” of state water quality certification review and unlawfully limit the types of activities, discharges, and impacts to waters that states may consider when they consider section 401 certification requests. The inclusion of section 401 in the Clean Water Act is one of the clearest steps that Congress took to respect the continued role of states in managing their natural resources.

“This Clean Water Act provision gives states the right to demand that projects like dams and pipelines include needed protections for local waters,” said Marc Yaggi, executive director of Waterkeeper Alliance. “It demands that federal agencies respect state decisions about what’s necessary to protect their waters and communities from dangerous pollution. Keeping section 401 strong is essential to carry out Congress’ intent that States continue to play a key role in protecting their waters and communities from pollution.”

Section 401 of the Clean Water Act creates a mandatory water quality certification process that delegates authority to states to decide whether to grant or deny a request for Clean Water Act certification for federally-issued licenses and permits for projects like dams and pipelines. States may also issue “conditioned certifications,” and the conditions required by states to protect waters are binding on federal agencies and must be included in federal licenses.

States and environmental groups rely on section 401 to exercise their authority to protect their local waterways and communities from projects that would have a significant impact on their local waters.

“As part of the 401 water quality certification process in New York State, we raised serious concerns with the Department of Environmental Conservation (NYSDEC) about the proposed Northern Access Pipeline, which would have crossed hundreds of vulnerable waterbodies on its 97-mile route through sensitive habitat and headwaters in the Niagara River Watershed,” said Jill Jedlicka, Buffalo Niagara Waterkeeper. “The Federal Energy Regulatory Commission proclaimed that this pipeline would not have had a significant impact on the environment, a declaration that we disagreed with due to the expected impact on headwater streams, wetlands, and sensitive native trout habitat. Ultimately, NYSDEC declined to issue a 401 certification for the pipeline, based on the company’s failure to demonstrate that the project would comply with New York water quality standards. This state authority under the 401 program is one of the only tools that our community has to be empowered to protect our state’s water quality.”

Waterkeepers Chesapeake and Lower Susquehanna Riverkeeper submitted section 401 comments to Maryland’s environmental regulator during the relicensing of Exelon’s Conowingo Dam. “The comments focused on the sediment and associated nitrogen and phosphorus pollution trapped by the dam and then released after heavy rains or flooding,” said Betsy Nicholas, executive director of Waterkeepers Chesapeake. “The regulator issued a certification in 2018 directing Exelon to develop a nutrient management plan. Section 401 provides the only pathway to ensure that this 50-year licensed project will protect our local waters.”