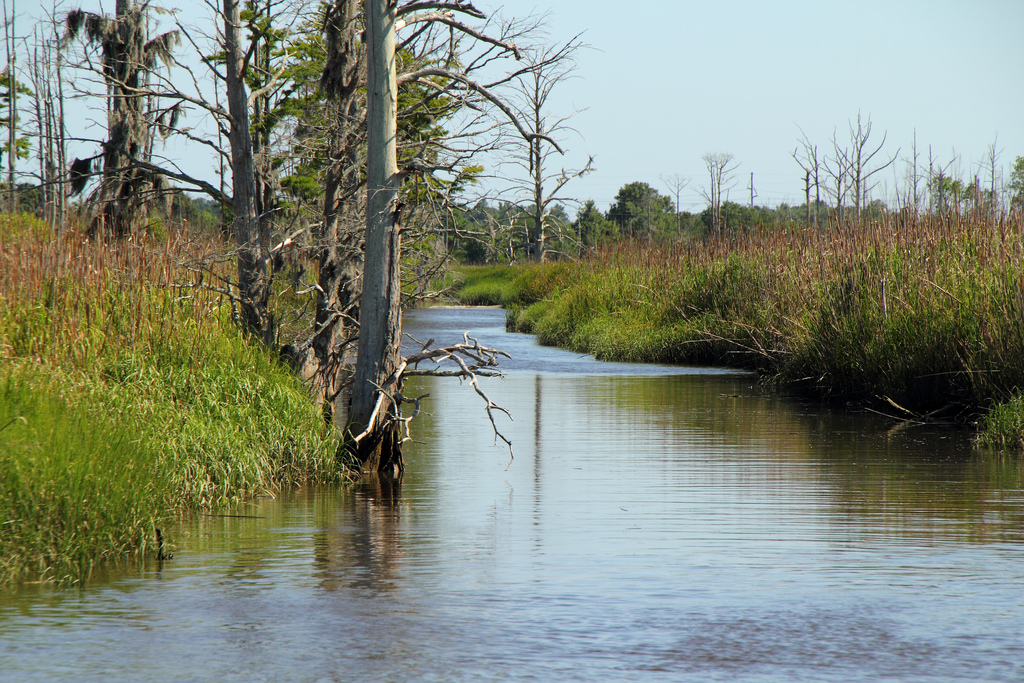 Part of a watershed where 94,000 swine and 1.3 million broiler chickens live in confinement, Stocking Head swells with waters from small streams, ditches, and ditched streams that sometimes stink of livestock waste. Nutrient pollution from Stocking Head Creek is part of what made the Cape Fear River Basin the U.S. watershed the Department of Agriculture deemed most vulnerable to livestock pollution.

But a proposal by the Trump administration could make conditions in Stocking Head even worse. The proposed changes to waters covered by the Clean Water Act could leave ditches, as well as streams that livestock operators have turned into ditches, without protection.

Those unprotected ditches contaminated by hog waste and chicken litter could feed the creek without legal consequences, polluting the Cape Fear.

Stocking Head Creek is, in many ways, typical of the Cape Fear River Basin, which has 1.7 hogs for every human — the highest concentration of industrial swine operations of any place on earth.

Hundreds of thousands of people get their drinking water from the Cape Fear River Basin. It’s also a rich ecosystem, home to plants and animals including ancient cypress trees, alligators, otters, and black bear. The Cape Fear itself is a habitat for endangered species such as Cape Fear Shiner, Atlantic Sturgeon, and West Indian manatees.

But the waste trickling into Stocking Head has created water quality conditions there that that are “consistently hazardous to human health at most stations,” wrote JoAnn Burkholder, William Neal Reynolds Distinguished Professor of applied ecology at North Carolina State University.

“Based on more than 30 years experience as a water quality specialist, I assess these conditions, ongoing and persistent in this representative stream in the Northeast Cape Fear River basin upstream from the Lower Cape Fear… segment, as comparable to the filthy conditions that occur just downstream from raw sewage discharge,” wrote Burkholder.

Those fetid conditions haven’t improved since the sampling Burkholder wrote about back in 2013.

While the state emphasized that results it released in December 2018 represented only a short-term study, those results were consistent with what Waterkeeper Alliance and academics studying the stream have seen for years: Heightened levels of nitrogen, phosphorus, and fecal coliform bacteria.

“If streams and ditched streams lose Clean Water Act protections, Stocking Head Creek and the Cape Fear River will be even more vulnerable than they already are to pollution from industrial meat operations,” said Kemp Burdette, Cape Fear Riverkeeper. “My whole family and my whole community depend on the Cape Fear River for drinking water. That’s why we’re fighting the Administration’s proposal with everything we have.”

You can act to protect Stocking Head Creek by submitting comments below about the Trump administration’s proposal to gut the Clean Water Act, telling the Environmental Protection Agency to maintain vital stewardship of Stocking Head Creek, and other important tributaries to our nation’s drinking water supplies. Raise your voice to defend our waters and help #SaveTheCleanWaterAct.