Trump's Misrepresentation of WOTUS - And Why It Matters - Waterkeeper

Trump’s Misrepresentation of WOTUS – And Why It Matters 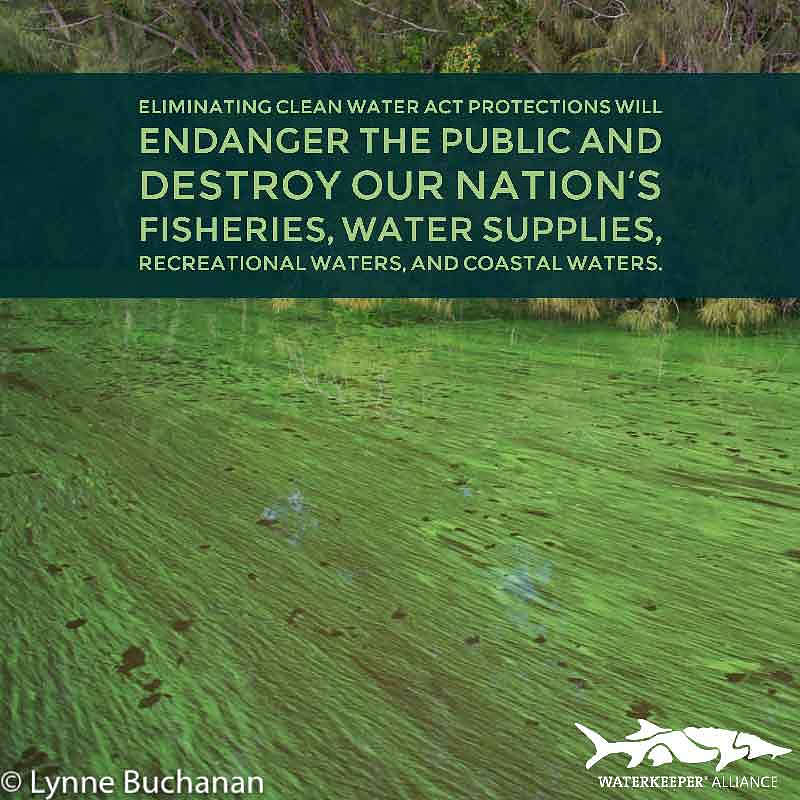 On February 28, 2017, President Trump signed an executive order to begin a series of actions, long sought by industry, that will allow uncontrolled discharges of toxic pollution into our nation’s waters. The administrative action is aimed at slashing the number of waterways that are protected against pollution and destruction under federal law, leaving the majority of our nation’s waters unprotected by the Clean Water Act – including streams, lakes, and rivers where federal jurisdiction has never been in legitimate dispute.

The media and advocacy about this issue can make it seem like a distant policy debate in Washington, D.C. that has no real impact on our lives, but nothing could be further from the truth.  If a stream, river, lake or wetland is not included in the definition of “waters of the United States” (WOTUS), then industrial waste and municipal sewage (i.e. toxins, pathogens, carcinogens, and radioactive materials) can be discharged into those waters without meeting any of the Clean Water Act’s permitting and treatment standards.  Those standards are what keep those discharges from contaminating your drinking water, killing all the fish in your favorite lake, or making your children sick when they go swimming in the river or at the beach.

Simply put, there is no legitimate justification for excluding rivers, streams, lakes, and wetlands across the country from Clean Water Act protection. Instead of even attempting to justify its draconian and dangerous giveaway of our nation’s waters to polluters, the Trump Administration has adopted industry talking points that disingenuously and misleadingly twist the facts and the law.

For example, the Trump Administration claims that excluding waterways from pollution prohibitions in the Clean Water Act will “[f]ree up our country” and “[c]reate millions of jobs.” It is true that industry might be free to discharge uncontrolled levels of dangerous pollutants into waterways across the country for the first time in 40 years, but it is false to say that this will somehow “free up our country” or “create millions of jobs.”

The fact is that water pollution has negative impacts on our nation’s economy, and controlling pollution has positive impacts. For example, our failure to control nitrogen and phosphorus pollution has caused exponential increases in drinking water treatment costs, billions in pollution cleanup costs, $1 billion in annual losses to the tourism industry, millions in annual losses to the fish and shellfish industry, and devaluation of waterfront real estate.  In Washington state alone, nitrogen and phosphorus pollution closed the razor clam fishery for part of 2016 resulting in an estimated $9.2 million in lost income.  By contrast, efforts to clean up nitrogen and phosphorus pollution in the Chesapeake Bay have resulted in enormous jumps in job creation and “[c]leaner water also will mean more fish, crabs, and oysters, which will translate to more work and income for fishermen, processors, packers, restaurateurs, and people in tourism-related industries.”

The Administration also claims that the U.S. Environmental Protection Agency’s (EPA) new definition of WOTUS is prohibiting farmers, ranchers and agricultural workers “from being allowed to do what they’re supposed to be doing.” There is nothing in EPA’s rule that prohibits farmers, ranchers or agricultural workers from farming and ranching. The rule only defines which waters are protected against unregulated discharges of pollution under the Clean Water Act.

The Administration claims that under the EPA’s definition, “navigable waters can mean nearly every puddle or every ditch on a farmer’s land, or anyplace else that they decide — right? It was a massive power grab.” These statements are false, and are taken from the strategy developed by a broad coalition of industry lobbyists designed to scare farmers and small-business owners and mobilize them in opposition to efforts by Congress and EPA to clarify which waters are protected.

The WOTUS rule was not a “power grab;” it protects fewer waters than have historically been protected under the Clean Water Act, maintains all permit exemptions for agriculture, and creates new exclusions for waterways typically impacted by agricultural pollution. For example, in the nearly 45-year history of the Clean Water Act, EPA has never attempted to regulate puddles. Despite this indisputable fact, the American Farm Bureau Federation and other industry advocates mounted a massive public relations campaign to convince everyone, particularly farmers, that EPA would be out on people’s farms inspecting and regulating mud puddles and tire ruts.  As a result, EPA explicitly exempted puddles from the definition in the final rule to make it beyond dispute that puddles are not protected under the CWA.

The claim that the rule extended protections to ditches is also false; in fact, it added new, explicit exemptions for ditches saying, “[t]he rule limits protection to ditches that are constructed out of streams or function like streams and can carry pollution downstream. Constructed ditches that flow only when it rains are not jurisdictional.” It is important to control pollution discharges into these waters because significant numbers of creeks, streams and rivers have been ditched or channelized across the country, and ditching/channelization increases the flow of water and pollutants to downstream waters.

The Administration also claims: “EPA’s regulators were putting people out of jobs by the hundreds of thousands, and regulations and permits started treating our wonderful small farmers and small businesses as if they were a major industrial polluter. They treated them horribly. Horribly.” The truth is that the rule has not caused a single person to lose their job – let alone hundreds of thousands – and it will not cause small farmers or small businesses to be treated like major industrial polluters. First, the rule has never been enforced because it is being reviewed by the courts so it is perfectly clear that no one has lost their job because of it. Even if it had been enforced, there is no evidence to indicate it would do either of these things – the rule only defines which waters are protected under the CWA and small farming and ranching operations are not permitted or regulated like a major industrial polluter under the Clean Water Act. EPA does have the authority to regulate pollutant discharges from industrial-scale concentrated animal feeding operations (CAFOs) under the Clean Water Act, but only 33% of the largest CAFOs have the required Clean Water Act permits, which further demonstrates how outlandish it is to say that EPA has been permitting and regulating small farmers and ranchers.

Lastly, the Administration claims that: “[i]n one case in Wyoming, a rancher was fined $37,000 a day by the EPA for digging a small watering hole for his cattle. His land.”  It wasn’t a small watering hole.  The Washington Post worked with FactCheck.org to look into this claim and “found that the Army Corps and the EPA found that the rancher actually constructed a dam on a waterway that was a tributary of the Green River, which is deemed by the EPA as a ‘navigable, interstate water of the United States.’” Despite multiple warnings, he built the dam without a permit required by the Clean Water Act to prevent the inevitable downstream water pollution caused by dam construction.

It is notable that the Trump Administration is so determined to make up or misrepresent facts to paint this executive order as necessary to protect small farmers and ranchers when farmers and ranchers are largely exempt from the Clean Water Act.  They are doing this for one obvious reason though.  Everyone will support keeping farmers free from the regulation of puddles on their land, but no one in their right mind would support allowing a corporation to be free to dump unlimited quantities of arsenic, cyanide, PCBs or other dangerous pollutants into our drinking water supplies, fisheries and recreational waters.  But the latter is what removing waters from protections under the Clean Water Act will actually do.  It is really that simple.