Nearly 10 months have passed since the community of Chaitén received an alert that fishing cages had been installed in Yelcho Lake with the purpose of reactivating salmon farming in the area.

But this story goes back to the year ’91, a year in which the Chilean Government gave maritime concessions to the Norwegian company Marine Harvest. The company carried out operations until 2007. After that year, it ceased working in fresh waters. In fact, they held an open meeting with the local community to inform them of the company’s withdrawal from the Lake.

Unfortunately, they never actually left. At the end of May 2018, Futaleufú Riverkeeper received an alert that fishing cages had been reinstalled in the lake. Marine Harvest had leased their maritime concession to the salmon company Caleta Bay to cultivate rainbow trout. The trout were raised in cages until they reached a weight of approximately 300 grams.

The local community witnessed fishing cages of 4 million trout being placed in the Yelcho Lake. Different rumors circled: according to the Navy, the cages were installed in order to measure the oxygen levels of the lake but according to some community members the cages were installed solely to take pictures for the company’s webpage. Both of these claims were false. Caleta Bay met with community members in an attempt to explain their business plan but only presented a video in English, which exacerbated the situation and angered those in attendance.

This is how the Yelcho Libre Movement was born. This movement’s main purpose was to stop salmon farming in the lake and strengthen tourism as the economic drive for the area. 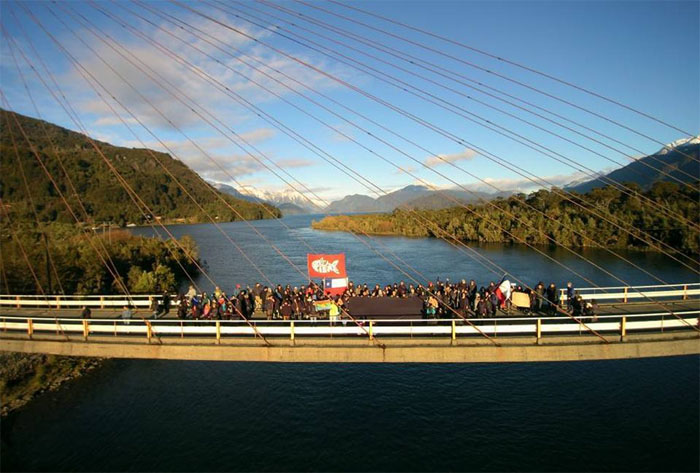 Futaleufú Riverkeeper was part of the movement from the beginning. We met with concerned citizens and informed them about the negative impacts that salmon farming would have on the Yelcho watershed. We attended meetings held in Chaitén, investigated regulations on salmon farming and maritime concessions, and gave technical assistance regarding environmental issues.

Thanks to the strong pressure from the community, local authorities and Futaleufú Riverkeeper, Caleta Bay stopped their operations in the lake and ended their lease with Marine Harvest.

At the beginning of December 2018, Marine Harvest reappeared as if a ghost from the past, holding several meetings in Chaitén, especially with the mayor of the city, Clara Lazcano. Coincidentally, at this time, the company changed its name to MOWI in what we think was an attempt to improve their image and distance themselves from their controversial past.

In these meetings, the company announced that they would keep the cages in the lake as an “administrative act” so that their concessions would not be taken away from them due to non-use. Thus, they would maintain the maritime concessions, which are considered part of the capital assets of their company.

The community acted firmly in rejecting this “move” due to their distrust of the company. Marine Harvest has been involved in many serious cases of environmental pollution along the coasts of our country and has garnered a bad reputation.

Negotiations between the company and community led to an agreement which allowed Marine Harvest to perform this “administrative act” without opposition from the community. By doing this, the company was assured not to lose the concessions they held. In exchange, the company agreed to renounce their concessions in March of 2019. Both sides held up their end of the bargain.

Fortunately, the past few months of uncertainty have ended. These negotiations, despite doubts at the time, proved successful. Álvaro Pérez, who led the negotiation for the salmon company, informed the Yelcho Libre Movement that the resignation documents were presented and signed on Monday, April 8, 2019 at the offices of the Navy located in Valparaíso. Those documents manifest the company’s renouncement of their concessions in Lake Yelcho, encompassing a total area of 47.5 hectares.

This has once again been a clear demonstration of the strength of the community united around the sustainable development of the territory and the protection of our natural heritage. However, this success is the first part of a much longer struggle. We now face the challenge of finding ways to permanently protect the lakes and rivers of Patagonia.

Yelcho Lake, which has a total area of 116 km2, is incredibly beautiful. It is surrounded by high mountains and native forests. Its water is collected from the Futaleufú River on its way to being deposited into the Pacific Ocean. We can now say with joy that its emerald green waters are free of salmon farming.