River Protectors Swim Across the Qiantang 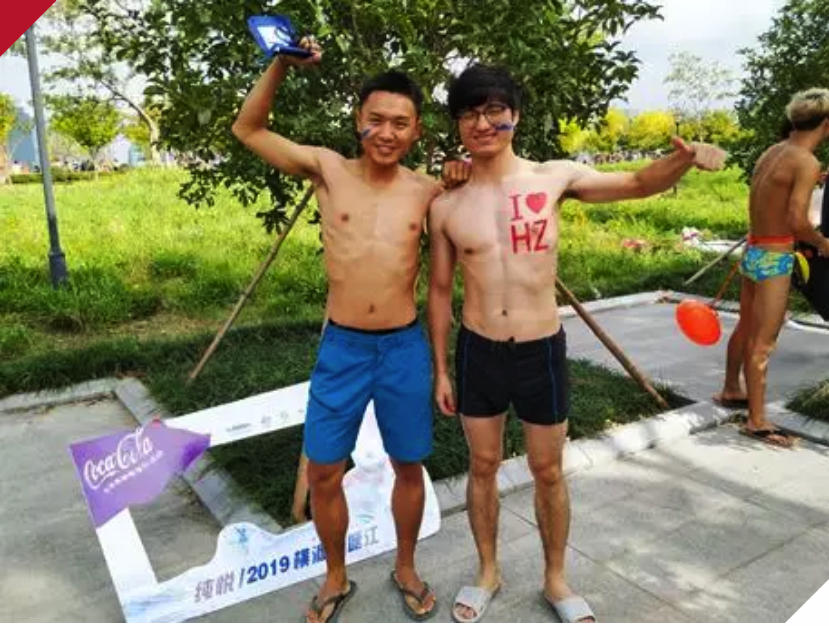 At 8:40 AM on the morning of August 25, the opening ceremony for the 2019 “Swim Across the Qiantang River” activity was kicked off at the Hangzhou Qianjiang New City Balcony. Now a traditional scenic race of Hangzhou and one of the city’s two biggest outdoor recreation events, the Qiantang River crossing swim event originated in 2006 and has become more and more popular each year it is organized, attracting swimming enthusiasts from around the country.

As the starting bells rang, over 2,000 brave swimmers took to the river, leaping into the water from the starting point on the south bank and swimming tirelessly to the finish line at the north bank on the opposite side. 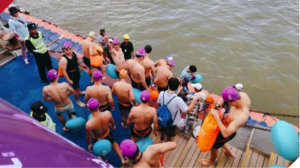 The Qiantang River Waterkeeper Team (Green Zhejiang) has participated in the event for six years in a row, and this year, they were given the honor of being the leading group for the entire river crossing event.

This year’s Qiantang River Waterkeeper Team consisted of 52 individuals from various fields in the private and public sector as well as college, secondary, and primary school students. The team was given strong support by Taigu Coca-Cola and had the slogan of “We Care: Protect Our Mother Rivers, Protect the Qiantang,” calling the public to action to make river protection measures a reality. 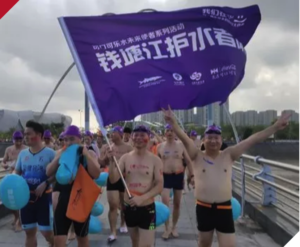 Colorful Waterkeepers Send Forth the Voice of Beautiful China

This year is the 70th anniversary of the founding of the People’s Republic of China, and it was the first time that the Qiantang River Waterkeeper team decorated themselves with paint. Volunteers from Hangzhou Normal University’s College of Art painted various slogans and phrases on the bodies of the Waterkeeper Team swimmers, including their back, face, arms, chest, and more. 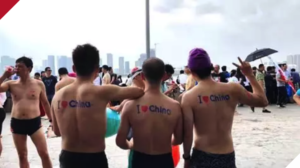 Protect the Qiantang, I love China, I love Hangzhou, Waterkeeper Alliance, “We Care”… these were but few of the slogans painted on the bodies of the Waterkeepers, celebrating 70 years since China’s founding. This also provided a reliable method for others to recognize which members of the swimming event came from the Waterkeepers team. 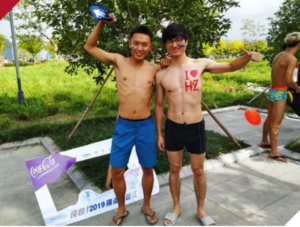 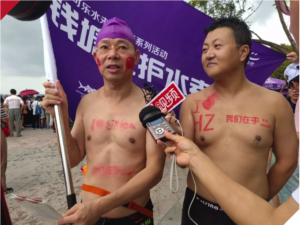 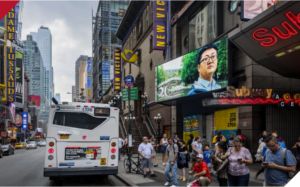 From 2010 up until now, Qiantang River Waterkeeper has taken part in a variety of internationally-influential environmental work: among many other contributions, they created an interactive environmental information map for citizen scientists, discovered and pushed for the resolution of over 600 environmental pollution cases, helped with the fruition of Zhejiang’s major government policy, “Treatment of 5 Waters,” promoted the establishment of citizen River Chiefs, organized environmental remediation round tables to promote cross-boundary dialogue, and directly participated in the creation of international standards for water resource management. This year is the 20th anniversary of Waterkeeper Alliance, and Hao Xin was selected as one of the “20 Waterkeeper Warriors;” in July, the water protection stories of all of these individuals and their Waterkeeper organizations, including that of Qiantang River Waterkeeper, was displayed on screens in New York City’s Times Square.

This Qiantang River Waterkeeper river-crossing event is also an important part of the Coca-Cola “Water-Earth Successor” public benefit event series. Compared to several previous times, team members found that this year, the river’s waves were unusually large, which was quite challenging for young student swimmers. 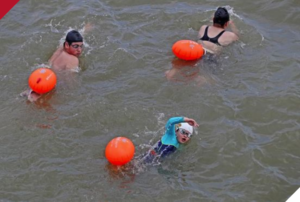 In addition to that, this year’s water levels were lower, and more than 20 meters worth of muddy banks were exposed—team members had no choice but to slog through the mud to reach the finish line.

Some team members even expressed that crawling through the mud on the banks was more exhausting than the swim itself, while others jokingly called this year’s Cross the Qiantang event the “Mud Crawling Competition.” 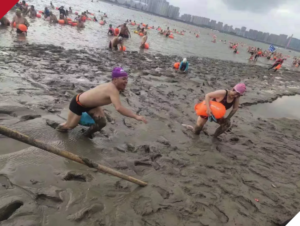 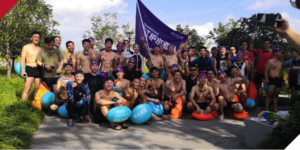 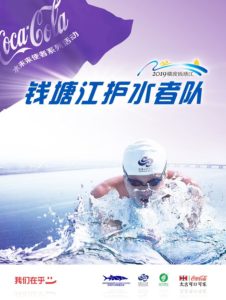