Catawba Riverkeeper Brandon Jones was standing before a packed gym of angry people in January, asking North Carolina’s Department of Environmental Quality a question almost everyone in the room wanted answered.

How could it approve a plan for coal ash that Indiana had determined violated federal standards?

Jones asked his question at one of six packed meetings around North Carolina about the fate of the state’s remaining coal ash ponds. Waterkeepers, staff, and members of Broad River Alliance, Cape Fear River Watch, Catawba Riverkeeper, French Broad Riverkeeper, Green Riverkeeper, Watauga Riverkeeper, and Yadkin Riverkeeper attended. At every meeting where the crowd was asked whether they supported full excavation, all hands went up. 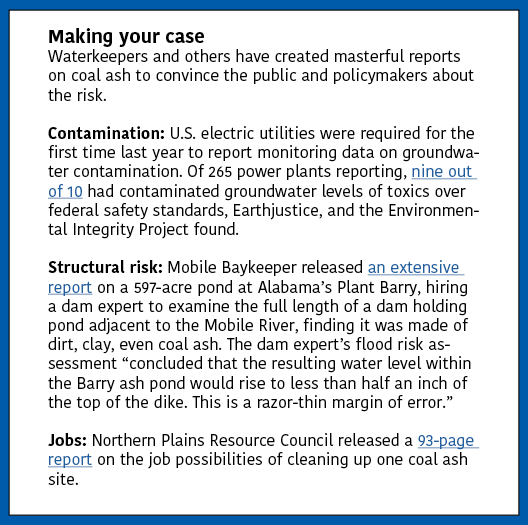 On Monday, North Carolina’s government followed sound science and the will of its people.

The state ordered Duke Energy to fully excavate unlined coal ash ponds at six sites — the last six plants in the state that weren’t already ordered to fully excavate and either place the ash in lined and capped facility or recycle it. The announcement followed more than a decade of litigation, coordinated work by dozens of groups, hundreds of people packing hearings, and more than a thousand people submitting comments almost unanimously in favor of fully excavating the sites.

“This is the culmination of hundreds, or thousands, of people’s efforts over the better part of a decade,” Jones said. “We’re all so grateful that DEQ (the state’s Department of Environmental Quality) made this decision. We were all a little surprised, or thrilled, ecstatic that they did this. We were all prepared for the long fight to continue.”

North Carolina is the third state to require full excavation of all its ponds. Previous statewide wins, in Virginia and South Carolina, also happened after Waterkeeper groups joined with partners to pressure power companies and state governments.

Following a years-long campaign by Potomac Riverkeeper and partners, Virginia’s governor signed legislation in January requiring Dominion Energy to fully excavate 27 million cubic yards of the toxic ash in the state. Thanks in part to work by Winyah Rivers Alliance,  South Carolina’s three largest utilities all agreed to fully excavate all their unlined storage ponds.

Waterkeepers and their allies in the fight against coal ash contamination have a new tool in those fights.

Of 265 power plants reporting, nine out of 10 had contaminated groundwater with toxic substances at levels outstripping federal safety standards, Earthjustice and the Environmental Integrity Project found. The groups ranked the San Miguel Plant in Texas as the nation’s most contaminated coal ash site. Second was Duke Energy’s Allen power plant in Belmont, N.C., in the Catawba River watershed.

One important source of data is well water testing near the plants. When Naujoks was Yadkin Riverkeeper in North Carolina, the organization tested wells near Duke’s Buck Plant. Of 360 wells tested, 330 were contaminated, leading the county’s public health department to issue a “do not drink” advisory.

That, in turn, led to North Carolina legislation requiring that all wells within half of mile of coal ash ponds had to be tested. In Virginia, Naujoks cited that data as he and allies pushed successfully for legislation requiring Dominion Energy to hook up water lines to anyone within a half mile of its plants whose well water showed any signs of contamination.

“Well water testing allows you to put a face on the issue,” Naujoks said. “It makes it about property values, public health, poisoning kids. Even the most conservative legislator can’t turn a blind eye to it.”

State-level peer pressure is another tool in the fight.

North Carolina like to be ahead of South Carolina; its southern neighbor’s moves to clean up its coal ash sites increased the pressure on North Carolina. Likewise, Waterkeepers elsewhere say they hope North Carolina’s announcement will help them.

Altamaha Riverkeeper Jen Hilburn, in Georgia, said when an announcement like this comes out, she tells everybody that story.

“I tell it on social media,” Hilburn said. “I tell it on the streets. These states that have gone through all this legislative scrutiny, all this regulatory scrutiny, they’ve realized this is toxic and it’s harming our communities.”

“North Carolina has to help,” he said. “It’s just another state to point to and ask, ‘What the hell are you doing?’”

He paused, and thought about his battles with Oklahoma’s government. “I don’t think they care, but they have to, because we’re here.”

*Feature image of a coal ash basin at one of the impacted sites, the Allen Plant.