Atlantic Coast Pipeline Cancelled After Years of Activism, Waterkeepers React to the Win 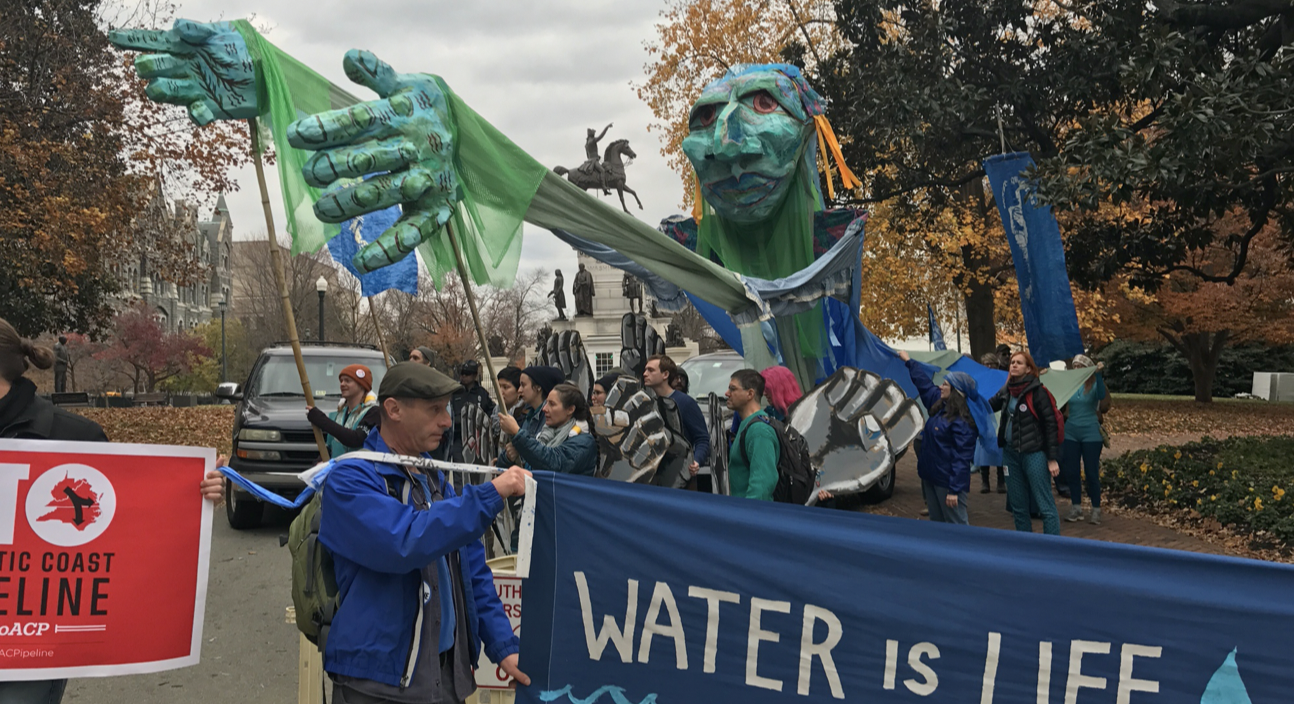 By Julia Widmann and Malaika Elias, organizers at Waterkeeper Alliance

In an unexpected series of pipeline-related wins for communities of color and environmental advocates last week, energy giants Dominion Energy and Duke Energy cancelled their Atlantic Coast Pipeline on July 5, citing regulatory delays and cost uncertainties. The day after the Atlantic Coast Pipeline’s cancellation, a federal judge shut down the Dakota Access Pipeline and the Supreme Court blocked further construction of the Keystone XL pipeline.

Environmental advocates—including Waterkeepers, community organizers, and attorneys—have led the fight against the Atlantic Coast Pipeline and other fossil fuel infrastructure projects for years. Waterkeeper Alliance thanks the activists for their hard work that led to this massive shift: an acknowledgement from two fossil fuel giants that their project is no longer economically feasible.

Dominion and Duke’s planned route for the natural gas pipeline included more than 1,500 stream crossings and impacts to wetlands as it stretched through West Virginia, Virginia, North Carolina, and land belonging to Native American tribes. We reached out to several of the Waterkeepers who opposed the Atlantic Coast Pipeline for their takes on the big news:

Jefferson Currie II, the Lumber Riverkeeper at Winyah Rivers Alliance in North and South Carolina, showed up, stood up, and spoke out against the environmental injustices of the proposed pipeline on the waterways and the diverse communities that call the Lumber River watershed their home.

“Winyah Rivers Alliance first became aware of the proposed pipeline in 2014 when we attended an Open House hosted by Dominion Energy to inform the community about the pipeline. This launched our efforts to oppose the pipeline in Robeson County, North Carolina in the Lumber River Watershed with many local partners and other advocacy organizations in the state. Our work against the proposed fracked gas pipeline project took us to public information sessions, public hearings, and public listening sessions, where we commented on the inadequacy of a number of state-required and federally-required permit applications, voiced concerns with local and state officials, demanded reform of the Federal Energy Regulatory Commission, challenged the adequacy of the pipeline’s federally required Environmental Impact Statement, launched legal challenges opposing the pipeline with our partner SELC, and implemented a NC Pipeline Watch project with our NC Waterkeepers in the path of the pipeline.

We are elated that the [Atlantic Coast Pipeline] is no more, but in the Lumber River Watershed we are still fighting Piedmont Natural Gas’ proposed Robeson Liquefied Natural Gas Project and Pipeline, an unnecessary and dangerous project that would pollute our waterways, while destroying more of the valuable wetlands we need to help control flooding from increased extreme weather events. We hope that these high profile pipeline decisions help shed light on some of these lesser known (but equally dangerous) natural gas infrastructure projects.”

Jill Howell, the Pamlico-Tar Riverkeeper at Sound Rivers in North Carolina, was another of several North and South Carolina Waterkeeper organizations to join in the Atlantic Coast Pipeline fight.

“In August 2018, Southern Environmental Law Center (SELC) filed suit on behalf of us at Sound Rivers and a number of other groups against the Federal Energy Regulatory Commission (FERC) for authorizing the pipeline without proper consideration of the impacts or public need. The same month, Sound Rivers, Winyah Rivers Alliance, Cape Fear River Watch, and Sierra Club launched North Carolina Pipeline Watch, a construction monitoring program that trained volunteers and member staff to monitor pipeline construction for violations of commonsense environmental protections required by state and federal permits by air, land, and water. This included reporting of violations to applicable regulatory agencies.

The cancellation of the ACP is a testament to the power of people when they organize and persevere, even in the face of billion dollar companies. Had this project been completed, it would have disproportionately impacted communities of color and low income communities, threatened the health of our waterways, and further entrenched the fossil fuel industry for decades to come. Unfortunately, in North Carolina tree clearing occurred along the route, and the pipeline was installed beneath the Tar River. We’ll celebrate this win, but the fight is not over as we now turn our attention to holding Duke and Dominion accountable in restoring impacted areas.”

“We hosted community meetings, developed citizen fact sheets and talking points, spoke at public hearings, submitted numerous comments on various permits, appealed illegal permits, met with agency heads, conducted field tours with decision-makers, and provided technical assistance to impacted landowners and allied groups. We partnered with Trout Unlimited to develop the first of its kind pipeline monitoring program and trained over 500 volunteers to conduct water quality monitoring and visual assessments to detect, document and report violations of pipeline construction practices and water impacts. To date, our citizen oversight program has resulted in the reporting of 165 potential violations to regulatory agencies.

Finally, it’s satisfying to see the developers of this project agree with what we’ve been saying for the past six years—this project was unnecessary, ill-conceived and recklessly pushed through the permitting processes. Sadly, impacts to lands and waters from construction of the Atlantic Coast Pipeline already occurred in West Virginia. We need to make sure that the ACP is not let off the hook to repair the damage they’ve done.”

Shenandoah Riverkeeper Mark Frondorf participated in the first grassroots organizing meeting opposing the pipeline in his watershed in early 2015 and remained active throughout the fight against the Atlantic Coast Pipeline.

“We testified before several State Water Control Board hearings, wrote letters to Virginia General Assembly members opposing the pipeline, engaged in nonviolent civil disobedience, marched, gave countless presentations to groups explaining why Shenandoah Riverkeeper opposed the pipeline and regularly featured their opposition on his twice-a-week radio broadcast talking about the health of the Shenandoah River. This fight involved support from several partner organizations and assistance from Potomac Riverkeeper Network staff; PRKN’s Phillip Musegaas, who is the Vice President of Programs and Litigation, was instrumental in analyzing the law and evaluating the best arguments to use in fighting the many permits needed before ACP construction could begin.

I will always remember the Fourth of July weekend as the time that the efforts of a broad coalition of environmental supporters finally killed this project. Dominion Energy tried everything to keep it alive—expensive lobbying, endless litigation, strong-arming regulatory authorities—but in the end, we prevailed and all of us who live in or near the Shenandoah watershed are better off.”

Read more about Shenandoah Riverkeeper’s work on the pipeline in their press release here.