A Chilling Message: Keep Away from Water's Edge - Waterkeeper

A Chilling Message: Keep Away from Water’s Edge 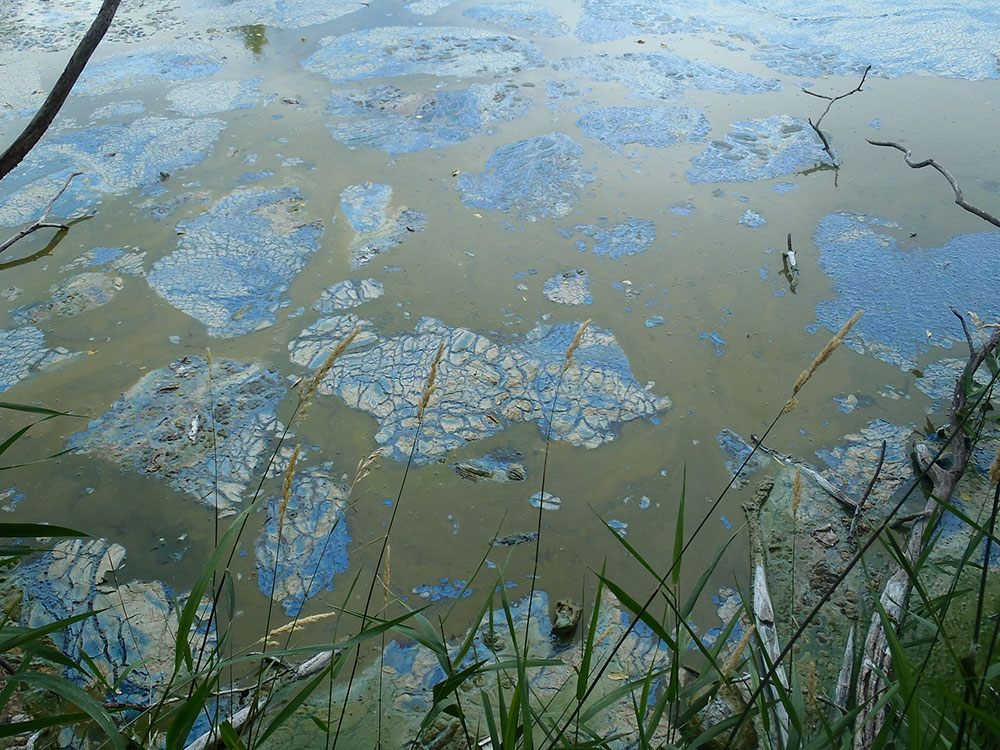 The message from local officials about a pond near Lake Norman last summer was chilling: “Keep away from the water’s edge for your safety.”

That message came after algae harmful to humans, fish, and dogs was found in the pond, and after three dogs died while swimming in a different pond near Wilmington. At High Rock Lake this summer, a dog died 11 hours after playing in the water. The dog’s owners told Yadkin Riverkeeper the dog exhibited symptoms associated with toxic algae poisoning.

The likely culprit in all three cases: Cyanotoxins caused by cyanobacteria.

Everyone who swims, fishes, or boats in North Carolina’s waters needs to understand what cyanotoxins are, what causes them to grow in our waters, and what we can do to prevent that growth. Millions of dollars from water-based recreation and property tax revenues are at stake as well.

Cyanobacteria, also called blue-green algae, are microscopic organisms found naturally in all types of water, according to the Centers for Disease Control. When water has high levels of phosphorus and nitrogen, blue-green algae can multiply quickly, creating blooms that spread across the water’s surface — sometimes visibly, sometimes invisibly. (The owner of the three dogs that died told a radio station that the water they had played in “was crystal clear.”)

Blue-green algae, which are technically a bacteria, not an algae, can make toxins known as cyanotoxins, which are among the most powerful natural poisons known, according to the Centers for Disease Control.

Scientists don’t know when blue-green algae will produce a toxin. One pond might have a huge, and visible, bloom that never produces a toxin, while another might have a below-surface bloom, invisible from shore, that does.

At a minimum, sampling and monitoring potential harmful algal blooms seems like an obvious answer. It’s time that the state made a practice of sampling for blue-green algae and cyanotoxins in monitoring waters with a history of cyanobacteria. EPA recently recommended water quality standards for cyanotoxins, which would require more testing. The North Carolina Department of Environmental Quality will also be reviewing water quality standards for cyanotoxins, which may mean more monitoring. Currently, the state has a certified lab test for only one cyanotoxin, microcystin.

But monitoring can’t be the only answer, in part because it can take three to five days after a sample is taken to get toxicity results back. That means we’re always behind the curve on toxicity.

We also have to take a harder look at what feeds algal blooms, and what spurs the growth of cyanotoxins.

One factor: Heat. Warmer temperatures increase the growth rate of cyanobacteria. Nine of the ten warmest years on record have occurred since 2005.

Another solution is limiting the nitrogen and phosphorus blue-green algae feeds on.

This can be accomplished by fixing leaky septic systems, expanding sewer systems, and, in North Carolina, limiting the waste from industrial animal operations that enters our waterways.

Waterkeepers like me around North Carolina recently drove our watersheds to help document the growth of North Carolina’s lightly regulated poultry industry. According to the resulting report, the state’s 4,800 industrial poultry sites have the potential to create five million tons of waste a year. That’s 161,290 times the weight of the Statue of Liberty.

The state needs to do more to keep an eye on that waste, which is more dense with nitrogen and phosphorus than waste from the state’s other big meat industry, swine. In fact, according to a 2016 report, the state’s poultry industry produces three times more plant-available nitrogen and six times more phosphorus than all its swine operations. And the poultry industry has continued to expand since then.

Most of that waste is trucked to cropland. But the state doesn’t track where it goes. It doesn’t track how much is applied on fields. And it doesn’t test or track if those fields have more nitrogen or phosphorus than they can absorb, or if any of it is leaching into nearby waters.

If we want our waters to be safe for us, for our children, and for our dogs, we have to do more to stop algal blooms. One way to do this is to institute some very basic requirements for our burgeoning, but poorly regulated, poultry industry, and to match this with similar reductions in nitrogen and phosphorus pollution from wastewater treatment plants.