Liliana Guerrero is a Waterkeeper Warrior. 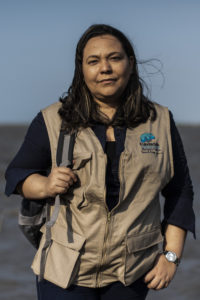 The Magdalena River snakes through Colombia’s snow-capped Andes and lush river valleys to meet the Caribbean Sea in the city of Barranquilla.

Our friends at Culture Trip traveled there to meet Liliana Guerrero, one of 11 Colombian Waterkeepers fighting to safeguard the natural wealth and public health of Colombia by protecting its rivers…specifically the Magdalena, where water emergencies are the norm.

In August of 2018, a barge carrying two-hundred gallons of diesel capsized at the river’s delta in the city of Barranquilla.

The fuel remained submerged in the River for twenty-three days… Forcing a water shutdown for more than a million people. One week later, an overturned tanker truck poured ten-thousand gallons of petroleum into the river’s estuary.

Barranquilla was in a state of emergency.

Instead of responding quickly, authorities started passing the buck from one to another…while the people suffered the consequences.

This is a situation Liliana sees all too often.

So as an environmental lawyer and Waterkeeper, she is pushing for more stringent laws… Urging her government to dedicate resources to risk management… And working to create a culture of protection around vital waterways.

Because for Liliana, clean water protection is not just a job. It’s a way of life. Liliana Guerrero, the Bocas de Ceniza Waterkeeper in Barranquilla, Colombia, and a lawyer and skilled litigator—with a particular focus on advocating for marginalized communities and environmental and wildlife conservation—is leading the campaign to stop the destruction that multinational coal companies are wreaking on her country.

Learn more about Liliana in the two-part 20th Anniversary edition of Waterkeeper Magazine.