Written by Paul Gallay, President and Hudson Riverkeeper. Reposted with permission from Riverkeeper.

Donald Trump once claimed to be “a very big person when it comes to the environment.” What Trump is doing to the Clean Water Act and other key environmental laws does indeed exceed all expectations — for failure.

Earlier this year, the American Bar Association invited me to deliver a paper and join a panel on environmental enforcement at its 48th annual environment and energy law conference in Denver. On the dais with me at the ABA conference were career officials from the Environmental Protection Agency and Department of Justice. I was not there for glad-handing — I came prepared to take these officials to task: this administration’s plunging levels of environmental enforcement are worse than any we’ve seen in decades.

The numbers don’t lie: the massive declines in staffing, inspections and enforcement at Trump’s EPA correlate with significant increases in water and air pollution. They also remind you of another thing President Trump once said: that he wants to eliminate the EPA “in almost every form” and leave only “tidbits” behind.

As Trump takes his deregulatory chainsaw to EPA, the following five stats were the ones that most startled the audience at last month’s ABA conference:

What was my fellow panelist from the Department of Justice’s take on all this evidence that the Trump Administration is epically failing on environmental enforcement? He admonished the audience not to be “seduced by statistics.” 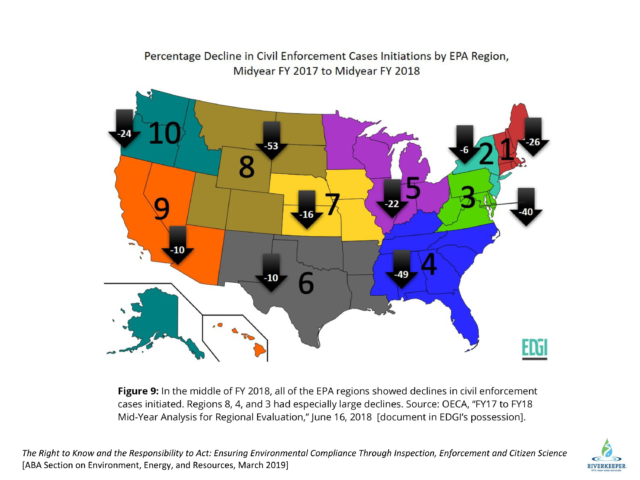 It’s hard to imagine anything seductive about these numbers. From any angle you look at it, President Trump has fundamentally undermined the effectiveness of EPA by cutting staff, inspections and enforcement capabilities, in contravention of long-followed bipartisan norms established under each of the previous four administrations.

After I gave my presentation, the other panelists — Suzanne Bohan, the assistant Region 8 administrator for enforcement, compliance and environmental justice, and Bruce Gelber, the deputy assistant attorney general for the DOJ’s Environment and Natural Resources Division — claimed that they’re “busier than ever.” They also shared the oft-claimed notion that individual states will step into the breach to make up for declining EPA enforcement.

If you think that the states will rise to fill the gaps left by a decimated EPA, think again. Budget constraints brought on in part by declining levels of federal funding for state enforcement programs [Trump proposed a 45% cut to state aid to enforce clean air and water laws last year] have sent state environmental agencies reeling and the number of inspections and enforcement cases in many states are in free fall. The burden of recent EPA inspection and enforcement cuts will fall especially hard on Americans living in states whose commitment to the environment is especially low, where EPA could formerly be counted on to act as the “enforcer of last resort.”

Despite my fellow panelists’ effort to put a brave face on EPA’s plunging commitment to enforcement, high-level EPA officials privately admit that all is not well. In a series of internal memos last June, they acknowledge that there have been “significant decreases in enforcement and compliance” and speculate about possible causes for this embarrassing plunge. The most noteworthy cause they identified: “the chilling effect” of the administration’s rhetoric and tone, including the “consistent message,” early on, to “slow enforcement.” Separately, staff have reported that they’re being told to “go easy” on regulated industries and are subject to far more scrutiny from higher-ups as to how they go about their enforcement work.

Thankfully, New York is taking a different path, Here, citizen science and public disclosure are driving a significant expansion of clean water funding and a growing commitment to environmental enforcement.

Starting in 2008, Riverkeeper and an army of citizen scientists began testing for bacteria and other water contaminants, and the problems we identified helped enact a statewide “Sewage Pollution Right to Know Act,” in 2012, to ensure public access to critical information about water treatment plant failures and storm-related contaminant discharges. Enforcement numbers are up, including a series of compliance orders requiring improvements to water treatment plants, assisted by over $3.5 billion in new state water infrastructure grant funding. New York also enacted an “Emerging Contaminants Protection Act,” in 2017, requiring virtually all public drinking water suppliers to test for a broad suite of previously unregulated chemical pollutants, the health impacts of which are only now coming to light. It’s a stark contrast from the situation at EPA, where staff cuts and a chill from above have undermined enforcement to a degree not seen since the 1980s.

In 1972, the Clean Water Act promised every American drinkable, swimmable, fishable water within ten years. Now, almost 50 years later, nearly half our rivers aren’t safe for recreation and tens of millions of us lack safe water to drink. Without a robust new federal commitment to environmental inspection, law enforcement and infrastructure investment, access to the benefits of the Clean Water Act and other bedrock environmental laws will become harder to achieve — and easier to lose — for millions of Americans.

At Riverkeeper, we’ll keep fighting for an increasingly strong commitment to clean water from our state officials. More importantly, we won’t stop calling out the Trump administration’s fundamental contempt for our clean water laws, until the nation’s rivers and drinking water supplies regain the protections that they urgently need and so richly deserve.

Feature image: Paul Gallay (center) speaks as part of an ABA panel on environmental enforcement at its annual environmental and energy conference.

Paul Gallay is an attorney, educator, and non-profit executive working to protect community character and improve environmental sustainability. As President of Riverkeeper, Paul fights for a cleaner Hudson and safer drinking water for over nine million New Yorkers. Paul is a graduate of Williams College and Columbia Law School and has held a number of teaching positions, including his current appointment with the Earth Institute at Columbia University. Read more