Jeff Currie had only been on the job as Lumber Riverkeeper for a few weeks in 2018 when Hurricane Florence came barreling through North Carolina. The devastating storm caused nearly $25 billion in damage and resulted in over 50 deaths. Currie had intended to spend more time at the start of his new job getting to know the lay of the land, but the storm immediately changed those plans. Instead he found himself doing rapid response sampling with partners at NC State University and UNC-Chapel Hill to test the quality of surface and groundwater throughout his watershed. Some of the sampling went on for months. 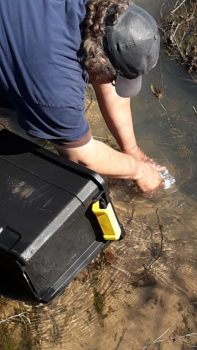 “It was a trial by fire, but it was exciting. I had to get up to speed quickly,” says Currie. “The sampling was important because the watershed was so heavily impacted and people and communities were suffering. There wasn’t a lot of time to think about the different parts of the role.”

Currie learned on the job. Though he does not have a science background, he says in jest, that he can read, and through research and by reaching out to experienced Waterkeepers in North and South Carolina, he feels like he has gotten up to speed quickly. Much of what he has learned has come through conversations with people in the community. It is this hands-on approach that has allowed Currie to make connections with people throughout the watershed.

“People in the community will stop when you’re sampling by a bridge, or by a swamp in the middle of nowhere. They’re curious,” says Currie. “After Hurricane Florence, I met a duck hunter who stopped to ask about the quality of the water in the swamp I was sampling. After talking about issues that affect water quality, including the sprayfields for a nearby poultry slaughterhouse, he ended up telling me that another poultry integrator was spraying effluent waste in their sprayfields at night.”

However, Currie’s job entails more than just talking to hunters. Since becoming the Lumber Riverkeeper he has worked against the Atlantic Coast Pipeline, a liquefied natural gas plant, an experimental wood pellet factory, while also dealing with hog CAFOs and the enormous growth of poultry CAFOs in his watershed. Recently, he has been working with the University of North Carolina on a multi-year project to look at pollutants such as arsenic and chromium in household drinking wells.

Before working as Lumber Riverkeeper, Currie, an enrolled member of the Lumbee Tribe of North Carolina, attended college within the watershed at the University of North Carolina at Pembroke, which was founded in 1887 as the Croatan Indian Normal School, and, during segregation, was the country’s only state-supported college for American Indians. After graduating with a degree in American Indian Studies, Currie worked at the North Carolina Museum of History in Raleigh for many years and later as a contract folklorist throughout North Carolina. When the opportunity to work as the Lumber Riverkeeper presented itself, he jumped at it.

“I had done a lot of historical, cultural work, but wanted to do something with the community where I could give back as much as possible,” says Currie. “Because if the water’s not healthy, the people aren’t healthy. It’s all meshed and intertwined.”

The Lumber River runs over 125 miles. It begins in the interior mountains of North Carolina, runs through the sand hills and into the coastal plains. Reliable maps of the river are a recent thing, as most people didn’t know this swampy area had a river running through it.

Like a lot of North Carolina, the Lumber River watershed is threatened by the agriculture industry, specifically manure runoff from animal livestock and confined animal feeding operations, or CAFOs. Chicken and hog waste presented an urgent threat to his watershed during Hurricane Florence, but it’s also a continuing threat, even in the best of weather. Of course, there’s also the problem of awareness.

“It’s an ongoing pollution nightmare,” says Currie. “People either don’t know or don’t pay attention until it’s in their backyard. And by then it’s too late. The idea is to get ahead of the game.”

Currie also cites a shift in North Carolina’s General Assembly to allow more aggressive deregulation. However, he is not dogmatic, but instead offers a balanced, and somewhat understandable explanation as to how this area found itself in this economic predicament.

“People are streaming into the cities, and rural communities are losing a lot of their populations, at least in North Carolina,” says Currie. “County leaders have had a hard time growing or even maintaining economic development. At this point, they’ll take anything: chicken, hogs, biogas, natural gas, anything. As a result, a lot of rural areas are becoming dumping grounds.”

The Lumber River watershed is almost entirely rural and ethnically diverse. The bulk of the watershed is in Robeson County, North Carolina, which, according to Currie, is around 40 percent American Indian, 25 percent African American and 10 percent LatinX, which for Currie means, “If it’s polluting my watershed, it’s got to do with environmental justice,” says Currie.

It’s part of what motivates Currie. The watershed needs protection, be it from CAFOs, pipelines, fracking, or other threats. But the area is also uniquely special to him. In a way, this role has allowed him to come home.

“I was born in Raleigh, but my ancestors have been on this river for thousands of years,” says Currie. “That’s pretty wonderful that I get to do this. There’s only a handful of Native folks working as Waterkeepers. I hope there will be more in the future, it’s a blessing. It’s a gift that I get to help my community, to help our river, which we call the Lumbee. There’s nothing better than that.”