When the Casco Baykeeper position opened up six years ago, Ivy Frignoca jumped at the opportunity. Frignoca is a lawyer and environmental advocate, whose work is motivated by her life-long love for the water. As an undergraduate at the University of Vermont, Frignoca designed her own major and became an unofficial spokesperson for nearby Lake Champlain. Her intention was to turn science into action, through information and education. When she found those tools weren’t enough, Frignoca went to law school to further hone her ability to speak for the water.

Growing up in suburban New Jersey, Frignoca was keenly aware of the deleterious effects of pollution. She recalls seeing streams near mills that ran different colors and knew of the high rates of cancer in her town. At a young age, Frignoca remembers when the Clean Water Act passed in 1972 and thinking how it was “a really big deal.”

Frignoca’s awareness that clean water is critically important is coupled with her lifelong draw to marine environments. She grew up swimming, sailing, snorkeling, and being in and around the water as much as possible. She knows the magic of water and that it draws diverse users and supports so much life. All of Frignoca’s life experiences, from her childhood observations of pollution to her years spent in litigation as an environmental lawyer, define her approach as a Waterkeeper. That is to say, she is a tenacious advocate for Casco Bay, but does not necessarily define herself as combative. 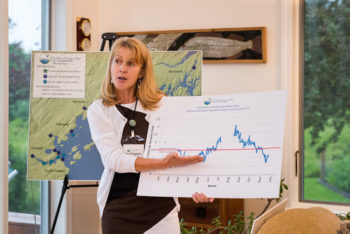 “It’s critically important to listen, be respectful and have conversations,” says Frignoca. “I try to find common ground or consider how solutions can be crafted that address valid concerns, while keeping the health of the bay my top priority.”

Casco Bay runs along the eastern shore of Maine, between Cape Elizabeth and Phippsburg. Western Casco Bay is the most populated part of the state and includes the city of Portland. With that comes combined sewer overflows and other typical effects of urbanization. 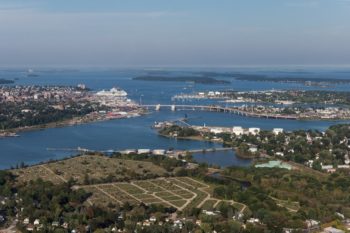 “It’s a fairly diverse bay and really a microcosm for what’s happening along coastal Maine,” says Frignoca. “There are a lot of pressures on Casco Bay. And because of all these pressures and the influence of climate change, the bay is at a tipping point. There are so many indicators that it’s on the precipice of ill health. And we’re really trying to keep it from falling over that cliff.” 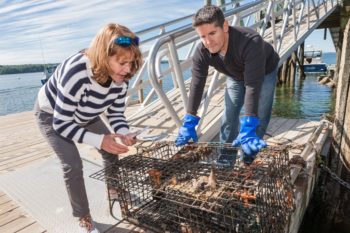 There are many threats facing Casco Bay: warmer temperatures, more acidic waters, sea level rise, more intense storms and storm surge, and increased stormwater pollution are some of the top problems Frignoca is working to address.

“Sea level is visibly rising and is already covering beaches and flooding roads and coastal properties. We are experiencing more intense storms that batter our coast and destroy or alter habitats and coastal communities,” says Frignoca. “Because Casco Bay is changing and changing quickly, my work as Casco Baykeeper must be creative, adaptive, and nimble.”

To that end, Casco Baykeeper is working on a project to adopt unified sea level rise projections, meaning construction and development must be built for what conditions will be in the future, not what they are today, or have been in the past. The idea is to make laws forward-thinking.

Or as Frignoca puts it, “We cannot rely on what worked in the past, but instead must forecast what will work best for the future.”

Casco Baykeeper has had its share of success, including convincing the East End Wastewater Treatment Facility, the biggest wastewater facility in the state of Maine, to reduce its nitrogen output into Casco Bay. As recently as five years ago, the plant had been producing huge levels of nitrogen without any testing requirements or limits. It was damaging the surrounding ecosystems through sparking algal blooms and harming local eelgrass beds.

So Casco Baykeeper pressed hard for reductions to be included in the facility’s permitting. They ended up working with the Portland Water District to come up with an adaptive solution. The facility reconfigured their aeration process and reduced their nitrogen output by 70 percent seemingly overnight. The plant avoided the $40 million in upgrades that had been forecasted. Better still, the toxic and harmful algal blooms disappeared.

Casco Baykeeper’s work is supported with the help of a dedicated network of volunteers that document evidence of pollution, algal blooms, climate change, and more. According to Frignoca, they have one of the most active and successful Water Reporter networks in the nation. The group’s observations have documented seal die offs, potential oil spills, and other issues warranting emergency responses. Those interested in helping with citizen science and monitoring can learn more about becoming a Water Reporter.

“It’s critically important to listen, be respectful and have conversations. I try to find common ground or consider how solutions can be crafted that address valid concerns, while keeping the health of the bay my top priority.” – Frignoca

Frignoca also gets a lot of support from other Waterkeeper groups around the world. She often reaches out to folks in different geographic areas who are nonetheless working on similar issues. Her hope is that together they can find solutions, build out models, and then replicate them.

“I am so impressed by the talents and accomplishments of my fellow Waterkeepers,” says Frignoca. “They inspire me, even during tough times, to do my very best.”