The NY/NJ Baykeeper is unlike most other Waterkeepers in that it doesn’t protect just one waterway. Rather it protects some of the many waterways that make up New York Harbor. That includes the upper and lower bay of New York, Jamaica Bay, Raritan Bay, Newark Bay, as well as parts of the lower Passaic and Raritan Rivers. Even the Kill Van Kull and Arthur Kill, the thin bodies of water that separate Staten Island from New Jersey, are on their map. Plus, the National Parklands of Gateway National Recreation Area and Liberty Island.

Greg Remaud has been with NY/NJ Baykeeper for over 25 years. He got a job right out of graduate school and, as he tells it, ‘stuck around long enough’ to become Baykeeper. His love of local water goes back to childhood. His father worked in the engine room on the Staten Island ferry, that iconic orange vessel that crisscrosses the harbor 24 hours a day. It captured his imagination, which is hardly surprising given how beautiful that ride can be with its views of the lower Manhattan skyline, Brooklyn Bridge and Statue of Liberty.

These are home waters to Greg, which offers a certain pull. But his motivations go way beyond nostalgia.

“What I love about water is that it is this big picture issue that touches on all aspects of people’s lives and connects all types of folks. It affects people in rural areas and urban areas, it touches on social and cultural issues,” says Greg. ”Watching waterways that have been shut off to local populations come back and be restored, places like the lower Passaic River, NJ Meadowlands, and Arthur Kill, where people had not been able to fully recreate in those waterways due to physical obstructions or pollution. What it means to the local communities to get those waterways back, it’s as big a thrill as you can get.” 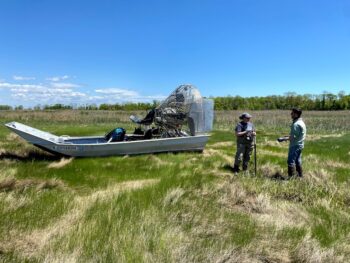 NY/NJ Baykeeper’s watershed is home to millions of people, including New Jersey’s two largest cities, as well as Staten Island. Along with supporting 200 species of fish and 300 species of birds there are many remnants of waterborne commerce here, including a graveyard for old tugboats and ferries. There is also a fair amount of ongoing industrial activity. As a result, there are Superfund sites and brownfields, both on the land and in the water. A lot of the contaminants come from the area’s legacy of heavy industry and manufacturing. For example, on the lower Raritan RIver portion of the watershed, NY/NJ Baykeeper is involved in a lawsuit with a former paint manufacturer that would once dump paint directly into the river, making the water appear different colors depending on the day.

Combined sewer overflows also present a persistent threat to clean water and a huge environmental justice issue as they hit communities of color the hardest . A staggering 27 billion gallons a year of raw, untreated human waste dumps into the harbor. All of the paved, impermeable surfaces of this highly urbanized area only adds to the problem. To address this, NY/NJ Baykeeper works with a locally led coalition called Newark DIG (Doing Infrastructure Green) that has identified 100 sites where land can be preserved or restored. It can mean taking an old parking lot and removing the asphalt, which creates a new green space as well as a place for stormwater to be naturally absorbed and thereby removed from the CSO equation. The idea being that the best way to protect water is to first protect the land around it.

‘It’s great to see the positive changes… the water quality is definitely improving.’

Over the years, NY/NJ Baykeeper has been involved in over three dozen land acquisitions, which have protected over 1,000 acres of urban land. (As a point of perspective, Central Park is 843 acres.) These parcels, which can be as small as five acres, are all near the water, usually in flood plains, and many provide additional public access.

Along with preserving land in one of the world’s most densely populated areas, NY/NJ Baykeeper teamed with Hackensack Riverkeeper to successfully sue the New Jersey Department of Environmental Protection to ensure rules that ensure urban residents have equally equitable access to local waterfronts as exists in other communities. 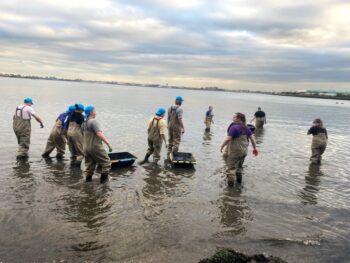 Coastal restoration using oysters and living shorelines is another form of green infrastructure that NY/NJ Baykeeper utilizes.  These waterways were once home to half the world’s oysters, but centuries of overconsumption, pollution, and habitat encroachment have endangered these local bivalves. Thanks to groups like NY/NJ Baykeeper, that created oyster reefs in both NJ and NY waters, they now have a real shot at recovery.  This type of natural restoration reduces storm surges, provides habitat for other maritime species, and, most critically, clean and filter their surrounding water. In fact, one little oyster can filter up to fifty gallons of water every single day.

So it’s no surprise NY/NJ Baykeeper’s restoration team are doing everything they can to create more resilient shorelines and reintroduce as many oysters as possible back into the water.  They have even gotten an assist from local youth hockey teams who are donating their old sticks, which oysters adhere to because of their carbon composition, to be used in constructing oyster gardens.

“Groups who wouldn’t necessarily be thinking about the water. It has given us an opportunity to make a great connection with  parts of the community we had not previously engaged,” says Greg. “We don’t think these green infrastructure initiatives are the whole answer, but it’s definitely part of the picture.“

NY/NJ Baykeeper engages those that despoil the local community in slightly less friendly ways too, especially when clean water is at stake. Together with Superlaw, a public interest law firm, they have been citing stormwater violations around Staten Island sending notices of intent to sue to compel the polluters to stop and fix their illegal actions they are doing. So far, it’s been effective, with about a dozen settlements in just a few years that have resulted in funding for community groups to construct rain gardens and other improvements in the impacted neighborhood while also protecting clean water.

This watershed has its challenges, but it’s also seen some major improvements. The harbor is the cleanest it’s been in a century. Oysters are not the only species to come back to the area. Humpback whales, harbor seals, dolphins, and several other animals have also returned.

“It’s great to see the positive changes. The water quality is definitely improving,” says Greg. “There’s been a lot of threats, but there’s also been a lot of significant victories, that’s for sure.”