The Flint River originates in the Upper Piedmont region of Georgia near the outskirts of Atlanta Metro and runs nearly 350 miles downstream — and downstate — to where it joins the Chattahoochee to form the Apalachicola at the Florida line, flowing on to the Gulf Coast. About a million people live along the Flint River. Though the population is shrinking along the southern half of the river, it is growing up near Atlanta. The river is very diverse, hydrologically speaking, and also has a lot of economic and cultural diversity. It’s given the Flint River an abundance of scenic locations, some sporty white water rapids, and a bump in species diversification. The river’s shoal bass, which was only recently declared a species in 1999, and a state symbol a few legislative sessions ago, attracts fly fishers from all over the world.

Gordon Rogers has been the Flint Riverkeeper since 2009. Though his roots to the organization stretch much further than that. Three of his cousins successfully brought a Clean Water Act suit that led to the formation of Canoochee Riverkeeper, which later became Ogeechee Riverkeeper, his mother helped start Suwannee Riverkeeper. And Gordon was on the founding board of Altamaha Riverkeeper, plus became the first Satilla Riverkeeper. Protecting watersheds, it turns out, was in his blood.

“These are issues that everyone should be involved with regardless of political affiliation.” 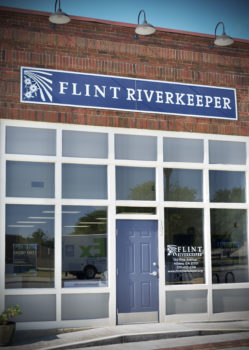 In his role as Flint Riverkeeper, Rogers feels driven by a sense of accountability to the people who live along the river. The handwritten notes, texts, emails, and phone calls from people who are appreciative of his team is what keeps him going. He is also a big believer in the Waterkeeper model.

“It is completely nonpartisan. That’s the secret sauce,” says Rogers. “It’s all about the river.”

It’s certainly a delicate balancing act from a messaging point of view. The Flint River watershed runs primarily through a politically Republican portion of an otherwise politically Independent state, with headwaters in a plainly blue zone. Move too far one way and you risk alienating half the population.

“Some people on the left think we are not woke enough. Some on the right think we are too cozy with the government. And it’s both bullshit,” says Rogers. “The trick is to keep the people at bay who would divide the hook and bullet people from the environmentalists. The trick is to market the truth. Because this is not a republican group or a democrat group. This is a river group.”

Flint Riverkeeper’s Director of Outreach and Development, Henry Jackson, echoes the sentiment, saying, “These are issues that everyone should be involved with regardless of political affiliation.”

As is usually the case, there are much bigger problems than politics facing the river. One major issue facing the organization from the very beginning was flow, or a lack thereof. As far back as the 1980s, wastewater was rerouted from the Flint River to other basins. It was a Clean Water Act compliance strategy. Essentially, as metro Atlanta grew, there was too much water being taken out of the river and not put back. The water had not been treated to the point where it could be assimilated back into the Flint. Not surprisingly, this had negative downstream effects on flow volume.

Rogers began working on this issue on ‘day one’ when he became Flint River Waterkeeper in 2009. There’s better treatment technology now, but there was also a lot to be untangled. Just this year, however, they saw the first actual return of water to the Flint River in decades. Rogers credits not only the work of Flint Riverkeeper but also that of American Rivers, upper-Flint utilities, and scores of citizens. 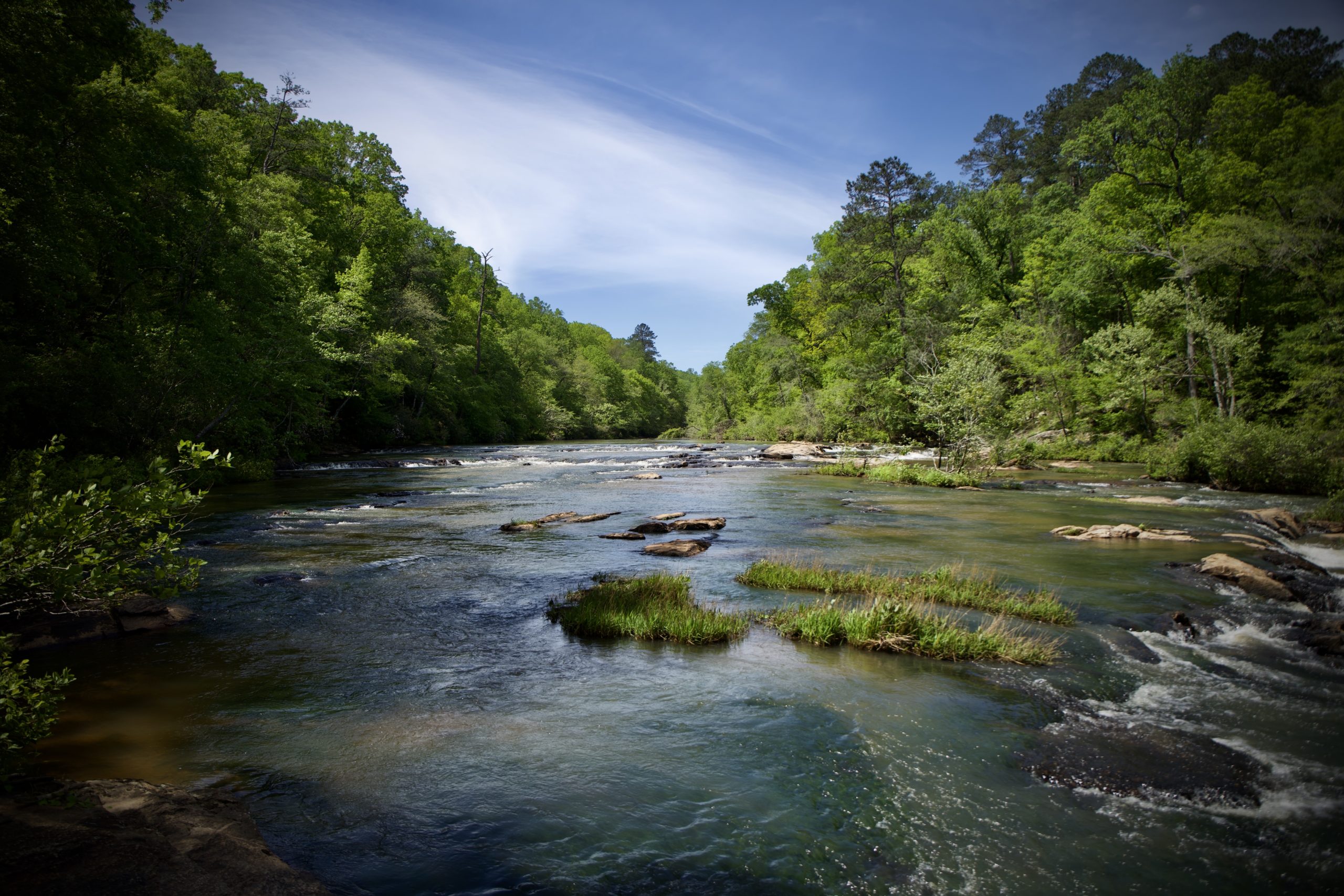 Volume is also a problem by way of overdiverting. There are thousands of farmers on the southern end of the river who depend on the river for crops. Luckily, additional innovations have been helpful in spreading the freshwater resource around, increasing conservation, cutting actual use.

“New technologies that have an effect of only 5 or 10 percent, and can make a huge difference due to the volume of use,” says Gordon. “Conservatorship and efficiency are joined at the hip. And much of the technology exceeds those thresholds”

Nonetheless, Gordon does not shy away from confrontation when necessary. He has had to ‘drop the Clean Water Act hammer’ on a few folks. They recently settled with one industrial site and are in talks with another, a concentrated animal feeding (CAFO) site. They were even able to hold the city of Ablany, GA’s ‘feet to the fire’ without filing suit.

“Everyone damn well knows that if we’re gonna bring the suit, we’re gonna stand a very high chance of winning it. We don’t file junk. And we are grateful to the Waterkeeper groups that paved the way in Georgia for us, like Chattahoochee Riverkeeper,” says Gordon. “But if the regulatory organizations would do their job, none of this would be a problem. Whether it’s laissez faire, conspiracy, or sellout, they’re just not doing their job.”

Regardless of all the challenges facing his watershed, both Gordon and Henry feel buoyed by being a part of Waterkeeper Alliance. According to Henry, “It’s the keeper moniker at the end of the name. People immediately connect with the organization and what it does.”

“It’s a heck of a lot more efficient and effective to be a keeper than to not be one. I accomplish in a month what used to take years,” says Gordon. “I can pick up the phone and get expertise and advice on anything. Someone in the Alliance has dealt with it.”

In the coming years, Flint River Waterkeeper expects to  see all the coal ash removed from the floodplain of their waterway, with work already underway.. They also want full compliance with all environmental laws within the watershed.

“It’s not an unreasonable ask, and it’s not an impossible goal,” says Gordon. “We want to see these depleted portions flowing at at least 25 percent of their historic flows. We want there to be enough water to be able to swim, catch fish, paddle, and maybe have a few Baptisms. We think that’s reasonable.”