Damon Mullis is the Ogeechee Riverkeeper in Georgia. He grew up spending a lot of time hunting, fishing, and recreating outdoors. At Georgia Southern University, where he received both his bachelor’s and master’s degrees, he studied science as a way to pursue a career in conservation. The plan was to use those skills to protect the natural world and its resources.

Unfortunately, Damon quickly became frustrated with the lack of impact his work was having. He couldn’t shake the feeling that his efforts were not being applied appropriately to protect the environment.  He felt like a lot of what he was doing as a scientist was just getting tucked away without ever being used to address real problems. Then, in 2018, an opportunity arose to become Ogeechee Riverkeeper.

“It was sort of a no-brainer. There’s no position where you could have more of a real world impact protecting our resources and our water than as a Waterkeeper,” says Damon. “I’ve always wanted to protect the resources. This job allowed me to do it. Most people don’t get to wake up every day and work and do something that makes a real world impact. I feel very fortunate to have this opportunity.”

Damon credits Waterkeeper Alliance for keeping him in close touch with so many like minded people and mentors, specifically other Waterkeepers. 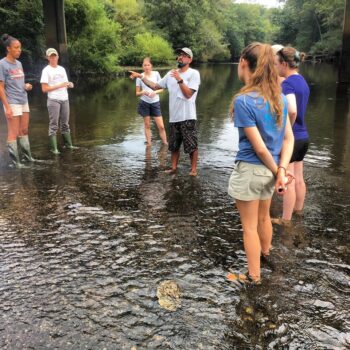 “That’s one thing that Waterkeepers have that a lot of other nonprofit workers don’t: a real robust network of people who have been through what you’re going through,” says Damon. “So you can lean on them and learn a lot. It is an invaluable benefit that you can’t put a price tag on.”

One of the first things Damon did upon taking the job as Ogeechee Riverkeeper was to build up the organization’s water quality lab capabilities, which is now being deployed to conduct testing throughout the basin. Perhaps informed by his previous professional experiences, Damon makes an effort to release all their data to anyone that can use it to help protect our water resources. Over the last couple of years, Ogeechee Riverkeeper has gone from an organization that had relied primarily on citizen science to one that collects a wealth of high quality data that is used to address real world pollution issues throughout the watershed. One of the most successful uses of that data began years before Damon even joined Ogeechee Riverkeeper.

“[A] lot of people don’t get engaged until it personally affects them. And by then, a lot of times, it’s too late.”

In 2011, a local textile plant was responsible for a massive fish kill. When that same company was looking for a permit renewal in 2018, Damon was just starting as Ogeechee Riverkeeper. He immediately embarked on a detailed and extensive water quality sampling regime, which almost uncovered PFAS, the dangerous ‘forever chemicals’ in the water. Subsequent fish tissue monitoring confirmed that PFAS had found its way into the food chain too.

It’s good news for the Ogeechee River, which, for the most part, retains a lot of its original wildness. The river is not as impacted as others. The Army Corps of Engineers doesn’t control the flow in the river, nor do any power companies. There are no large dams, just a free flowing black water river. 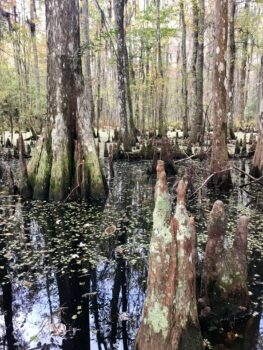 “When you’re out on the river, you feel enveloped in wildness, which is tough to find in the state of Georgia in 2022,” says Damon. “It’s hard to find those places that make you feel like you’re out in the wild. It makes it even more important to protect it, because these things are becoming rarer.”

Damon’s watershed also includes part of the City of Savannah, the oldest city in the state of Georgia, where he currently lives. A years-long project to expand the port to take on bigger ships and increase annual container volume capacity is set to complete in the next few years. In the near term, that has meant more dredging. But in the long term, an expanded port means expanded development. It means more people, more jobs, and, of course, more pressure on water treatment infrastructure.

Meanwhile, just upstream in Bryan County, the Hyundai Motor Company has announced plans to build an electric vehicle assembly plant. The facility will be housed in the Bryan County mega site, which will become the largest economic development initiative in Georgia’s history. Once completed, the site will employ 8,400 people. The downstream effects of this development have not been felt yet, but they are coming. It’s why Damon encourages people to be informed as early as possible.

“People get concerned with development when it happens in their area, but they should have been concerned three or four years earlier when it was first proposed. People should tune into what these projects mean,” says Damon. “We don’t learn from our mistakes. We’re still filling wetlands and putting impervious surfaces everywhere, and then we have new flooding issues as a result. It’s because a lot of people don’t get engaged until it personally affects them. And by then, a lot of times, it’s too late.”