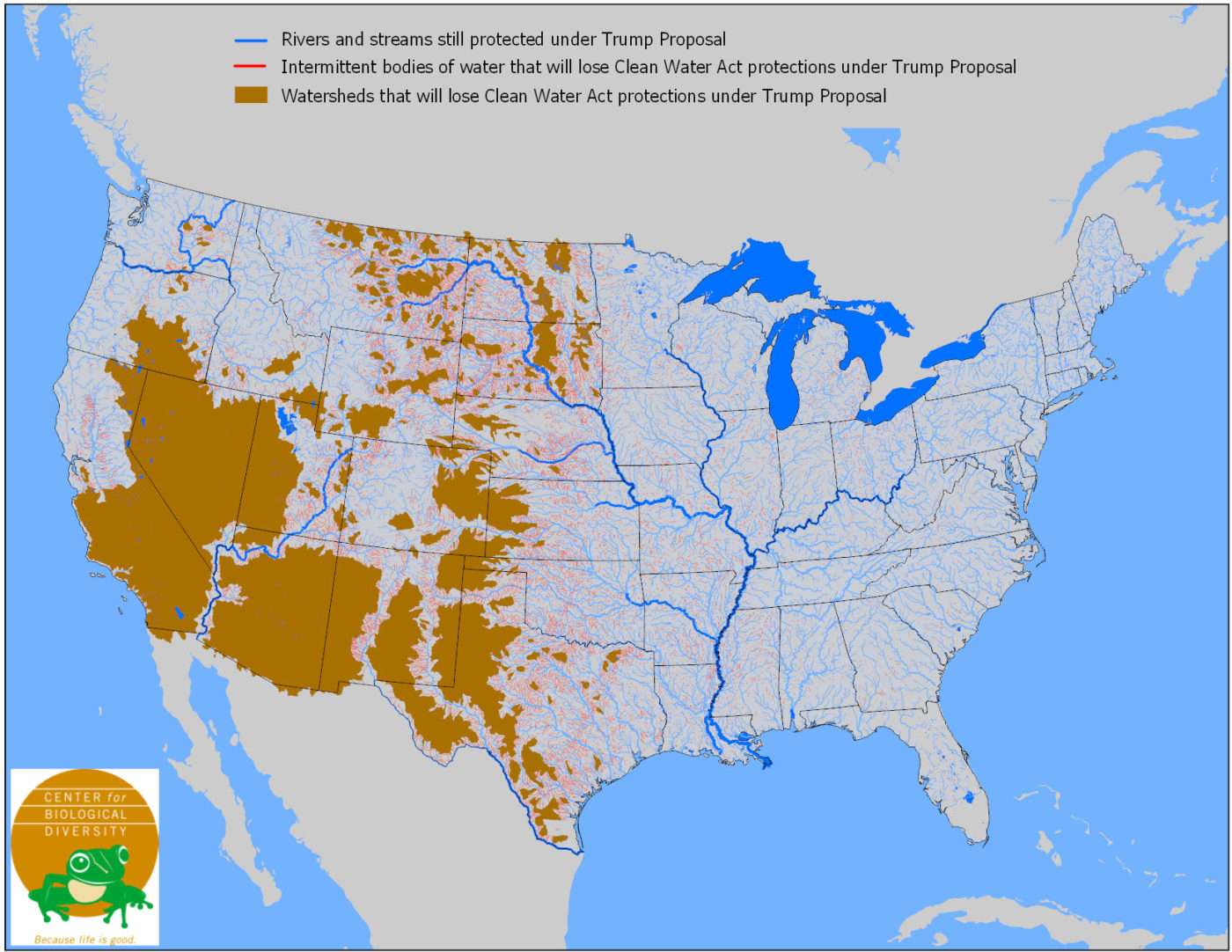 A Trump administration proposal today to radically slash Clean Water Act protections would free industry to dump toxic waste into streams across the United States and allow the destruction of millions of acres of wetlands critical to endangered wildlife.

By limiting protections only to wetlands and streams that are “physically and meaningfully connected” to larger navigable bodies of water, the proposal would virtually eliminate the Clean Water Act’s protections across the arid West, from West Texas to Southern California, including most of New Mexico, Arizona,  and Nevada.

An initial analysis estimates that today’s proposal from the Environmental Protection Agency and U.S. Army Corps of Engineers would cut Clean Water Act protections for streams and wetlands across 3,000-plus watersheds in the western United States. The plan could accelerate the extinction of more than 75 endangered species, from steelhead trout to California tiger salamanders.

“This sickening gift to polluters will result in more dangerous toxic pollution dumped into waterways across a vast stretch of America,” said Brett Hartl, government affairs director at the Center for Biological Diversity. “The Trump administration’s radical proposal would destroy millions of acres of wetlands, pushing imperiled species like steelhead trout closer to extinction.”

The proposed rule could be finalized next year. It was prompted by President Trump’s Executive Order 13778, which urged the Environmental Protection Agency — now headed by Andrew Wheeler — to protect only those waters that have “a relatively permanent surface connection” to a traditionally navigable body of water such as a major river. The executive order followed the legal view of the late Supreme Court Justice Antonin Scalia, which was not adopted by the Supreme Court.

In rushing to publish the proposed rule, the two agencies failed to comply with either the Endangered Species Act or National Environmental Policy Act. Both laws require the federal government to “look before you leap” and ensure that the environmental consequences of a particular action will not cause unintended environmental damage.

“EPA and the U.S. Army Corps of Engineers are attempting to reduce or eliminate Clean Water Act protections for the majority of our nation’s waters in violation of our most basic procedural and environmental laws,” said Waterkeeper Alliance Senior Attorney Kelly Hunter Foster. “The agencies should be working to protect the public and restore our nation’s waters — not engaging in this elaborate multi-year plot to legalize more water pollution.”