“But, the most important thing about PCB’s … is that we have identified a mad dog—a known bad actor in the case of PCB. There is no doubt about its toxicity and danger in the environment. It has caused millions of dollars worth of damage in the United States; the time has arrived to get rid of it.” – Statement of Congressman Gude, Legislative History of TSCA (1976).

Monsanto was, in essence, the sole manufacturer of PCBs in the United States from 1930 until 1977. PCBs are an extremely toxic, persistent chemical that can cause cancer, neurological damage, immunological damage, and other severe human health problems. Monsanto contaminated the entire planet with PCBs through its manufacture, distribution and aggressive marketing of roughly 1.4 billion pounds of PCBs during this period. 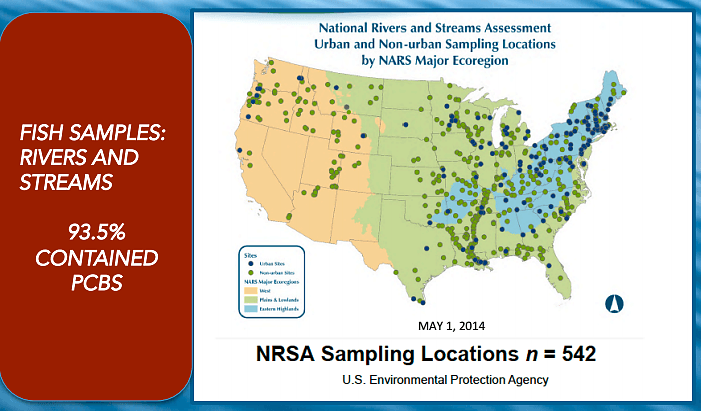 Monsanto knew that PCBs were toxic to humans and other living things, and that these toxic chemicals were being released into the environment, but the company did not stop producing them and did not properly warn the public about the danger. Monsanto was aware of PCB toxicity in 1930s. Even after the mid-1960s, when it became fully recognized by others that PCBs were dangerous and that large amounts were escaping into the environment, Monsanto continued to produce, distribute and market PCBs until 1977.

“[T]here is little probability that any action that can be taken will prevent the growing incrimination of specific [PCBs] as nearly global environmental contaminants leading to contamination of human food . . . There are, however, a number of actions which must be undertaken in order to prolong the manufacture, sale and use of these particular [PCBs] …” – Monsanto PCB Committee (1969).

By the time Monsanto ceased production in 1977, it was estimated that 150 million pounds were already free in the environment, 290 million pounds were in dumps or landfills that constitute continuing sources of release, and at least 10 million pounds of PCBs were released each year through vaporization, leaks and spills. EPA also reported in 1977 that PCBs were present in significant concentrations in waterways around the world and in the milk of nursing mothers throughout the country. Today this toxic pollution persists all over the world in our bodies, in our homes and schools, in the water, in the air, in our food supplies, in our drinking water, and in fish, wildlife and plants. Monsanto’s toxic PCBs continue to be transmitted through the placenta or mother’s milk to unborn children and infants.

“The truth is that PCBs are everywhere. They are in meat, they are in everyone in the courtroom, they are everywhere and they have been for a long time…” – Monsanto Attorney Opening Statement, Owens v. Monsanto (N.D. Alabama April 4, 2001).

U.S. SCHOOLS: Thousands of American schools built between 1950 and 1979 contain hazardous concentrations of PCBs in their window caulking and lighting fixtures, endangering millions of children with mitigation running from approximately $1 million to $3 million per building.

SUPERFUND SITES: According to the EPA CERCLIS Superfund program database, PCBs have been identified as a contaminant at more than 300 NPL or non-NPL sites, including major cleanup sites like the Hudson River, Hanford, Anniston, and Fox River.

TOXIC RELEASES: In 2014, according to EPA’s Toxic Release Inventory, 3.8 million additional pounds of PCBs were released into the environment at 87 different locations in the United States.