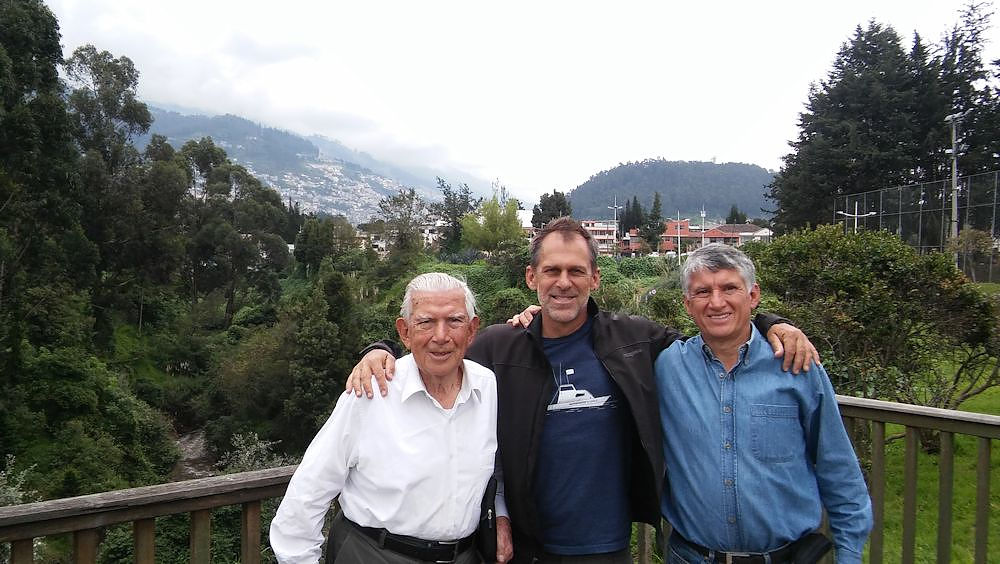 The Waterkeeper movement – all 320+ of us around the world and our staffs – likes to think of each other as a family, but perhaps nowhere is that more pronounced than in Quito, Ecuador along the Machangara and Guayllabamba Rivers.

Guayllabamba Waterkeeper is truly a family enterprise. The family of Rafael Chambers – including his sons, daughter, and grandson – all play a role in the work to protect and restore the rivers that flow through and past Quito. In early May of 2017, I spent a day with the Chambers family visiting their worksites along the Machangara River in Quito and discussing the many challenges that they, and other NGOs, face trying to protect the rivers and natural resources of Ecuador.

Although Quito is mostly a modern city sitting at 9,000 feet of elevation in the foothills of the Andes of northern Ecuador, it confronts the problems faced by many cities in Latin America and around the world of urban trash pollution, unplanned development, and untreated sewage flowing into rivers. The Machangara River flows into Quito at the city’s southern edge where the river mostly flows through Quito in a steep ravine of ~150 feet deep. Quito is about 45 miles long, but only 4 miles wide, with mountains rising up around it while the Machangara River often rages through the city.

We stopped and watched the river flow strongly below us in several parks in Quito and we walked through the parks looking at Guayllabamba Waterkeeper’s work. The first few months of 2017 had been extremely rainy in Quito and the ravine was bright green with vegetation and trees as we peered down to the river below. Rafael Chambers, the family’s patriarch, used to work for the City of Quito’s forestry department and has brought that love of urban forests to the Waterkeeper’s programs. Although a very small and mostly volunteer organization, Guayllabamba Waterkeeper has planted thousands of trees over the last several years, an activity that works to protect the Machangara River’s watershed and connect the people in the community to that watershed.

Guayllabamba Waterkeeper focuses on three programs – tree planting along the rivers, river cleanups, and educational programs to teach children how to connect with nature by growing fruits and vegetables. Rafael remembers his youth fondly, back when he could swim in the Machangara River. Today that is impossible due to the serious pollution in the water from industry and a lack of wastewater treatment facilities.

The three Quito-centered programs take almost all of their time, but the family also has a deep interest in the Guayllabamba River as it leaves Quito and flows through the western hills of Ecuador and towards the Pacific Ocean, about 150 miles downstream. After we left the parks in Quito, we went to the Waterkeeper’s office and poured over maps of the Guayllabamba River. Rafael told numerous stories of his adventures and scientific investigations of the Guayllabamba River. As he stared down at the large map of the watershed, his mind and voice came alive telling story after story of each segment of the river.

Farther downstream, the Guayllabamba River faces threats of equal magnitude to the urban pollution in Quito. Resource extraction in the form of mining and hydropower has dug its claws into the Guayllabamba watershed. One large hydroelectric dam has already been built and others are planned that would impact the flow of water and stop sediment while blocking passage for migrating fish. Equally bad, when the hydroelectric companies build dams, they also build a large network of roads that open up relatively pristine forest to development. Mining companies are often right behind the dam companies, providing a one-two punch that permanently and dramatically impacts the forest, watershed, and river’s health.

As we discussed the Guayllabamba downstream, Rafael’s grandson, Juan Francisco Chambers joined us, along with his girlfriend, Fernanda. BothJuan Francisco and Fernanda have spent many days exploring the Guayllabamba northwest of Quito and had vivid stories depicting the problems created by the hydroelectric and mining companies.

Throughout my discussions with the Chambers family and my travels in Ecuador visiting with other environmental and river activists, I heard similar stories about the challenges facing NGOs that are working to protect Ecuador’s environment. With little political support from the national government, NGOs often paste together their work, donations, and volunteers to try and keep some hope alive that the beautiful country and its waterways can be protected as development pressure increases.

The Machangara and Guayllabamba Rivers are in trouble and face all sorts of serious challenges, but it is a wonderful river system and well worth saving. Further, the Chambers family in Quito is a delightful example of a Waterkeeper who has adopted their local waterway and is working to protect it with their passion and lives.