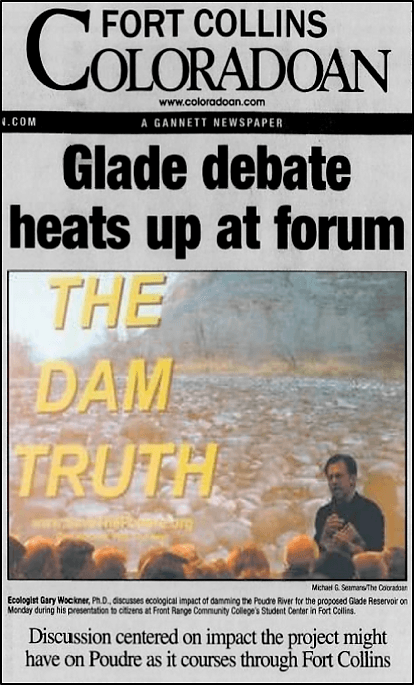 Ten years ago I was pictured on the front page of the Fort Collins Coloradoan newspaper giving a presentation titled, “The Dam Truth.” The movie, “The Inconvenient Truth,” had just come out and I thought “The Dam Truth” was a plucky spinoff that would grab the public and media’s attention, which it did. Our local Waterkeeper in Fort Collins – Save The Poudre: Poudre Waterkeeper – has been fighting, and continues to fight, a massive dam project on the Cache la Poudre River that inspired this presentation and much more.

As I write this on Sunday, February 18th, 2017, the investment company, The Motley Fool, just posted a blog titled: “Why Wind and Solar May Have to Fill In for America’s Crumbling Hydro Infrastructure.” And yesterday, a team of advocates from Friends of the River in California posted a column in the San Francisco Chronicle titled, “To Avoid Catastrophe, Don’t Build More Dams.” Further, Grist borrowed my 2008 presentation title with a blog three days ago titled, “The Dam Truth: Climate Change Means More Lake Orovilles.”

These stories – and dozens more in the last week – were focused on and caused by the looming catastrophe in Oroville, California, where the U.S.’ tallest dam teeters on the brink of failing. The engineering flaws at the Oroville Dam have been exposed by the incessant rains in northern California.

But these engineering flaws are only the tip of the iceberg of why dams should be abandoned as a water and electricity source in a climate-changed world.

The Motley Fool article nails it when they highlighted alternative stock picks that focus on wind and solar instead of dams and reservoirs from hydropower. And the Friends of the River column further highlights alternatives for how water can be served to cities and farms without using ultra-expensive, environmentally damaging, and increasingly risky dams and reservoirs.

In a climate-changed world, countries across the planet – including the U.S. — need to heed these alternatives now, rather than further invest in hydropower. If we don’t, we will continue to learn expensive, life-threatening lessons like those teetering on the brink in Oroville, California.

And that’s The Dam Truth.

******
Gary Wockner, PhD, directs Save The Poudre: Poudre Waterkeeper, The Save The Colorado River Campaign, and advocates and writes about protecting free-flowing rivers across the planet. Contact: [email protected]