Stay inside, support Cook Inletkeeper and the Bears of Amakdedori - Waterkeeper

Stay inside, support Cook Inletkeeper and the Bears of Amakdedori

Everyone remembers the first “activist” sticker they put on their car, right? Well, I do. It was a “NO Pebble Mine” sticker that I put on the bumper of my old Ford Explorer the summer after my freshman year of college (2002). I got the sticker in Bristol Bay, Alaska where I worked that summer at a salmon processing plant. I’ve been engaged in, and passionate about the Pebble Mine issue since.

So it was my distinct honor this past January in Nevada City, California at the Wild and Scenic Film Festival to introduce the latest of many great documentary films on the Pebble Mine issue: Pebble Redux – The Bears of Amakdedori. And it was even more special that I got to do so wearing my Waterkeeper Alliance hat and facilitate a QandA after the film with the filmmakers and Brandon Hill of Cook Inletkeeper — our steadfast advocate for the great waters of Cook Inlet, Alaska.

Cook Inletkeeper has long been in the Pebble Mine fight — a true pioneer in opposition to this horrible proposal. Every twist and turn of a truly epic saga has had Cook Inletkeeper’s focus and subsequent strong advocacy and organizing presence. Despite the actual proposed site of the mine being somewhat far away from the waters of Cook Inlet. But Pebble’s natural gas pipeline — to power the mine — and its export terminal (if approved) would tear open the wildlands of Lower Cook Inlet.  Pebble would build this infrastructure at Amakdedori Creek in Kamishak Bay.

Next Tuesday, the 21st of April at 1 PM mountain time, you can learn more about this fight and ways to support it by joining a “quarantine watch party” digital premier of Pebble Redux – The Bears of Amakdedori hosted by Natural Habitat Adventures. This new short film is a riveting window into one of the most critical conservation battles on the planet: how the proposed Pebble Mine would destroy the best brown bear habitat in the world, and how Alaskans are fighting to stop it.

There are few icons of wilderness as powerful as the bears of southwest Alaska. With thousands of them living wild on the Alaska Peninsula, they play crucial roles as ecosystem curators and economic drivers, drawing wildlife lovers from all over the world who support the region’s lucrative sustainable bear-viewing industry. 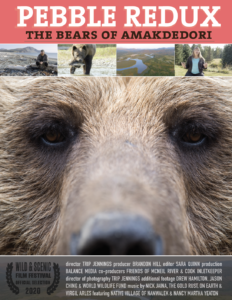 This film explores what could happen to the bears, and to the irreplaceable value of wilderness, if the Pebble Mine becomes a reality. Once regarded as untouchable, the best brown bear habitat in the world faces the risk of becoming a mining district, causing indelible harm to the pristine ecosystem at the headwaters of Bristol Bay. The enormous open-pit mine and transportation infrastructure would affect vast tracts of protected land: Katmai National Park, McNeil River State Game Sanctuary, and Lake Clark National Park protect habitat that supports the world’s largest sockeye salmon run, the largest congregation of bears in the world, and the incalculable riches of untouched wilderness. Those protections now hang in the balance.

Tune in on April 21 at 1 PM Mountain Time to watch the film, learn about what’s at stake for brown bears, and find out what you can do to stop the Pebble Mine.

The webinar event will start with Drew Hamilton (Friends of McNeil River) giving background on the mine proposal and impacts to bears, then the film, and time for questions and answers.  There will be a video statement from the United Tribes of Bristol Bay as well to represent the greater geographic region impacted by the proposed mine.

The film will be available for people to watch after the event as well, via YouTube.