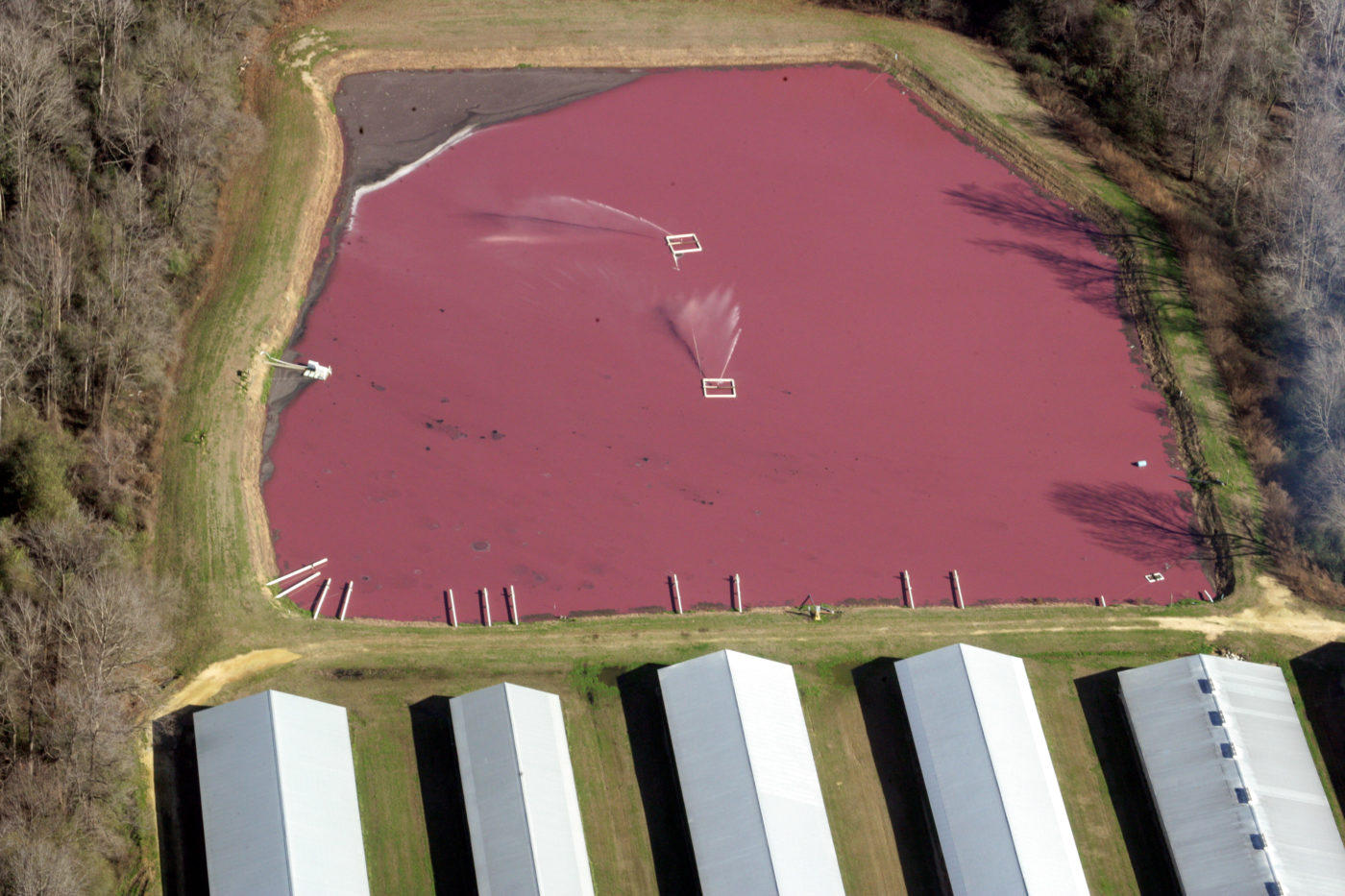 North Carolina is jumping in — quickly — and with a blessing from the state utilities agency, to a mass experiment of capturing gas from swine waste and shipping it in pipes.

This is the wrong solution to North Carolina’s hog waste problem.

The background: Hogs in North Carolina generate close to 10 billion gallons of waste a year. Almost all of North Carolina’s 9 million hogs live in crowded industrial operations, where their waste is stored in unlined open cesspools (see photo above), some the size of Olympic swimming pools, before being sprayed on nearby cropland.

This outdated waste management system means noxious odors, flies, and well-water pollution for hog operations’ neighbors, among other problems. Groups of North Carolina neighbors have sued a Smithfield subsidiary under environmental nuisance law. In five federal lawsuits, with juries of fellow North Carolinians, the neighbors have won each time.

More than a decade ago, North Carolina’s legislature recognized pollution caused by the cesspool and sprayfield system threatened our communities and natural resources and said new waste management technology on hog operations must address those problems.

But the way that Smithfield is pursuing its biogas investment isn’t an attempt to solve those problems. Instead, Smithfield Foods is rapidly rolling out biogas infrastructure on its North Carolina operations that largely ignore — and worsen — pollution.

One of its planned plants, the Grady Road Project, which was slated to begin construction last month, will build 30 miles of pipeline to collect gas from 19 hog operations owned by Smithfield and its contractors in Duplin and Sampson counties, then ship it to a processing plant to convert it for use, according to the Charlotte Business Journal.

Smithfield’s energy subsidiary, Smithfield Renewables, plans to begin producing gas at the plant by late summer of this year and be at full capacity by the end of the year.

The company and its partner, Align, are eyeing an even larger project when Grady Road is complete. “After Grady Road, Align’s next project in North Carolina will comprise more than 30 farms in Duplin County,” according to the Charlotte Business Journal.

Smithfield has trumpeted that another project, the $14 million biogas plant at its Tar Heel processing facility, is part of its goal to reduce its greenhouse emissions by 25 percent by 2020.

But its reliance on the outdated cesspool and sprayfield systems has created more greenhouse gas than would be produced otherwise.

Smithfield is choosing to invest in technology that only captures methane and ignores or worsens other pollution issues.

Smithfield’s decision to continue to use the cesspool and sprayfield system leads to the production of more methane, a greenhouse gas that’s 25 times more potent than carbon dioxide, than would be produced on a diversified farm.

The waste in the cesspools breaks down anaerobically, or in the absence of oxygen. This produces more methane than would be produced if the manure were applied to land or soil, where it has more exposure to oxygen.

Smithfield’s plan is solving a problem that was only created by its antiquated waste management practices in the first place.

Its plan won’t solve the longstanding pollution problems caused by unlined cesspools. For instance, one of the environmental costs of the current system is nitrogen contamination of soil and groundwater.

Smithfield’s method of biogas production threatens to make that worse. That’s because it proposes to cover hog cesspools to trap gas. But covering the cesspools increases the nitrogen concentration of the waste they hold because ammonia, the gaseous form of nitrogen, gets trapped under the cesspool’s cover. The result is that the waste sprayed on nearby fields has an even greater concentration of nitrogen than it would otherwise, threatening nearby streams, creeks, and rivers.

It doesn’t have to be this way. Biogas projects could be designed to address these, and other, pollution concerns. A project at a hog farm in the state proved just that.

But Smithfield is choosing, despite working with the same firm that developed that project, to invest in technology that only captures methane and ignores or worsens other pollution issues.

Nevertheless, $15 billion Smithfield Foods is trumpeting its plans to capture gas from swine waste and — if everything goes as planned — profit from it, as providing “renewable energy to consumers while reducing their own, and the state of North Carolina’s, carbon footprint.”

What it’s really doing is planning an infrastructure that would monetize its polluting system, adding to its profits, making Smithfield even richer.

Meanwhile, the neighbors who won five federal nuisance suits because of odor, flies, and tainted wells will continue to suffer.