The situation is further complicated by the mercury Superfund site also in Lavaca Bay because plastic absorbs and collects other toxins such as mercury.

Diane and San Antonio Bay Estuarine Waterkeeper’s allies include local and statewide Vietnamese-American activists who’ve witnessed Formosa’s toxic pollution in both Texas and Vietnam, activists from St. James Parish “cancer alley” in Louisiana and the site of Formosa Plastics’ proposed expansion, and partners at the Center for Biological Diversity.

Last week San Antonio Bay Estuarine Waterkeeper released of a 151-page document outlining the citizens’ suit against Formosa. Then last weekend Diane’s allies organized an action on kayaks and rally by the Formosa plant, and on Monday morning, they organized a press conference and rally by the courthouse where the citizens’ suit is now being argued. Diane spoke at the rally and gave tours of the creek where plastic pellets and powder have been discharged.

Diane and San Antonio Bay Estuarine Waterkeeper do not seek money for themselves; they seek damages of $184 million from Formosa to be paid to the federal government. Their collective ask of Formosa is simple: stop the discharge of plastic powder and pellets into their bay and remediate the accumulated pollution and its detrimental health impacts to ecosystem and human health. Texas RioGrande Legal Aid is representing her in court.

Diane has been fighting Formosa’s pollution for 30 years, but in the last three and a half years she began taking daily pellet and powder samples from the water and fastidiously documenting photo and videos of the pollution. She was helped by her Lavaca Bay allies and supporters, including several former Formosa employees and citizens whose health has been threatened by their pollution. Together they built a robust backlog of evidence and began organizing for legal action.

A historical lack of accountability and enforcement by state and federal agencies has allowed Formosa to continue polluting without consequence. In 2017, when pressure from Diane and San Antonio Bay Estuarine Waterkeeper mounted, the Texas Commission on Environmental Quality (TCEQ) launched an investigation and charged Formosa a small fine for their unlawful discharges. TCEQ finally issued the fine in January 2019, but it lacked a requirement to halt pollution, and Formosa has not let up their illegal discharges of plastic pellets and powder.

The global plastics problem is complicated and growing; at current rates of plastic pollution, plastic in the ocean will outweigh fish by 2050. There’s a plastic island twice the size of texas in the Pacific Ocean. Researchers in the Philippines recently discovered a dying whale, it’s belly completely stuffed with 88 pounds of plastic. Scientists found microplastics and microfibers inside of the fish we eat and it’s clear that the plastic chemicals stunt fishes’ growth and affect reproductive capabilities. The effect on human health is not yet fully understood, but scientists know that microplastics degrade into nanoplastics as small as cells, and these are undoubtedly accumulating in our bodies. Meanwhile, only 9 percent of plastic gets recycled worldwide, and the U.S. faces a dilemma now that China’s stopped purchasing our trash.

Yet corporations like Formosa are ramping up plastic production; reports estimate investments of $65 billion in plastics generally in the United States. Projects such as Formosa’s proposed expansion in Louisiana actually receive tax incentives despite the well-documented burden of pollution on citizens. The plastic industry, like the fossil fuel industry, has undue influence on our laws; while several cities and some states have adopted plastic bag bans, plastics-funded legislators in many more are pushing pre-emption bans that prevent cities from banning single-use plastics. Texas is one such state with a “ban-on-bans.” Formosa Plastic is also in a political and marketing alliance with organizations that are fighting the plastic bans.

The citizens’ suit against Formosa Plastic Corporation continues. Diane and San Antonio Bay Estuarine Waterkeeper’s fight against Formosa Plastics is far from over, but in battling plastic pollution at the site of production, Diane, San Antonio Bay Estuarine Waterkeeper and her community reveal the power of citizen science and grassroots action and provide a model for challenging the plastic industry everywhere. 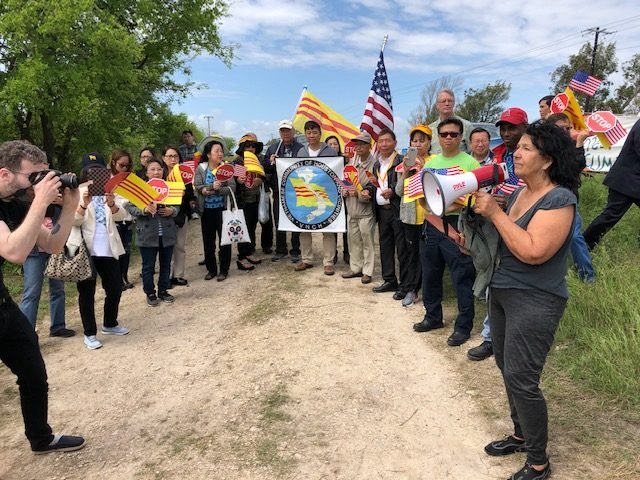