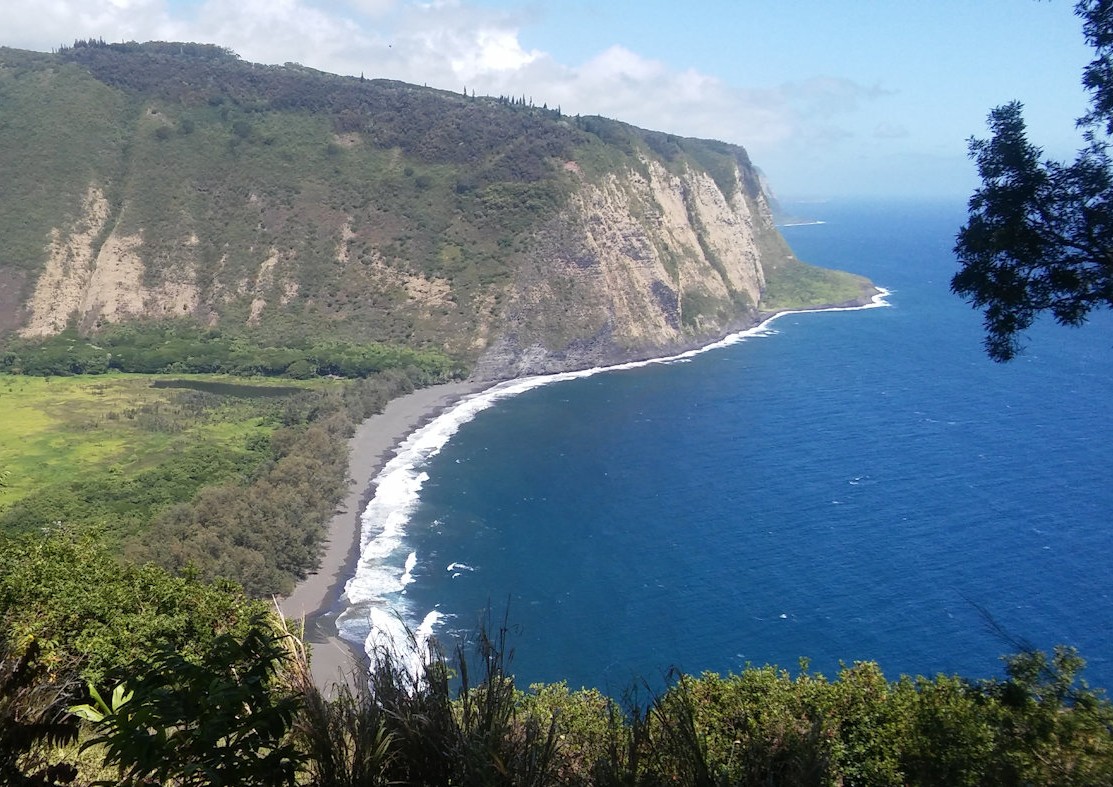 Great spirit, I’ve had it
Bring me back to the nomadic
Way of weaving through the damage
Mindful, stay mindful
Great spirit, for my sisters
Let me be a flowing river
Flood the banks, the rocks that bind her
Carry, I’ll carry
— “Great Spirit,” Nahko and Medicine for the People

Traveling around the Big Island of Hawaii, Nahko’s music and videos come to mind often. Many of his songs and videos depict scenes on the Big Island – Mauna Kea, Rainbow Falls, the Wailuku River, the surrounding reefs and Pacific Ocean. And many of these same places – and the water that binds them all together – are deeply threatened by the throng of people moving to and visiting the island.

In late July of 2017, I visited the Big Island to survey some of its watery problems, and I was, unfortunately, easily able to find the problems as they were repeatedly pointed out in local newspapers and across the landscape and waterways at the very same time of my visit.

In Kona, I was confronted with a large front-page newspaper story in West Hawaii Today with the headline, “Scared For My Water,” which told the story of the drought and mismanagement of Kona’s water supply. Several of the community’s wells had been shut off forcing all residents to be asked to conserve 25% of their water use. As we drove along the hills outside of Kona, flashing orange signs along the highway pleaded with residents to conserve water. And in the newspaper article, the County water managers tried, unsuccessfully, to defend themselves from the residents’ charges that the County was at fault.

Just four days earlier, another water problem made front-page news in the same newspaper in Kona, and it is a problem that plagues much of the island where people live along the coast. The article was titled, “Experts say other indicators should be considered when testing for bacteria,” and told a story about the dispute surrounding the pollution along the Kona Coast. The more I learned about the issue and dispute, the more concerned I became.

The entire Kona Coast, which includes thousands of home and businesses, has no public wastewater treatment system. Every house, and “gangs” of houses, as well as businesses – including all the hotels just feet from the ocean and reef – use cesspools or septic tank systems to treat their waste.
Because all of Kona community is on a hill sloping down to the shoreline, and all of Kona sits on top of somewhat porous lava rock, the waste all filters through the lava rock and down into the ocean along the coast. Bacteria levels routinely measure above thresholds required by the U.S. Environmental Protection Agency, an agency that has struggled for years to address the problems caused by Kona’s wastewater and the pollution of the ocean.

While I stayed in the Kapoho area, I got to see the problem firsthand. During two days of my visit, a “King Tide” rolled in and swamped many of the yards, streets, and cesspools in the neighborhoods along Kapoho. The County has tried to control the development by requiring above-ground septic tanks and other wastewater devices, but newspapers and online discussion boards routinely discussed the health problems associated with the bacterial pollution of the tide pools. Further, as is visible to everyone in Kapoho and in other areas along the coast of the Big Island, the rocks and coral closest to shore are algae-covered due to the wastewater runoff.

Water problems showed up across the island during my visit. The world-famous waterfalls on the Waipio River in Waipio Valley were almost completely dry. We visited in the dry season which increases the problem every year, but local people told us that the drought combined with diversions by farmers and ranchers upstream have begun to make the waterfalls dry out more frequently.

Despite the dry waterfalls, the Pacific Ocean still pounded the coast in Waipio Valley creating the stunning and beautiful scene that draws tourists from around the world. That dichotomy — an island with lots of watery environmental problems that is still stunningly beautiful — exemplifies the need to have a much more active environmental movement on the Big Island which was part of the reason for my visit.

Over the last year, Waterkeeper Alliance has begun setting up local Waterkeeper groups on the Hawaiian Islands. Led by local Hawaiian attorney, Rae Chandler, who is the O’ahu Waterkeeper, the Alliance now has two Waterkeeper groups in Hawaii with hopes of setting up a third and maybe fourth soon. The Big Island has a great need for a Waterkeeper to join with local communities to create a voice for the protection of the island’s water resources.

Rae – whose Hawaiian birth name is “Rhiannon Tereari’i Chandler-‘Iao” – has significant experience with the water laws in Hawaii as well as the local Hawaiian culture, both of which will be needed to make a real difference on the Big Island. I had lunch with Rae at Hilo’s famous “Kuhio Grill” which is “Home of the Famous 1lb Laulau”, and she is absolutely exuberant to be representing Waterkeeper Alliance in Hawaii and working to protect and restore Hawaii’s waterways.

Rae is filled with energy and enthusiasm, and I have confidence that she will take strong steps forward to protect the Hawaiian Islands. Indeed, she has a “Great Spirit” of her own to make positive change. This Great Spirit – embodying the energy towering overhead from Mauna Loa and Mauna Kea – is needed on the Big Island as well as across the planet now more than ever.

— “Great Spirit”, Nahko and Medicine for the People

Gary Wockner, PhD, is the Poudre Waterkeeper and serves on the Board of Waterkeeper Alliance. Contact: [email protected]GaryWockner.com