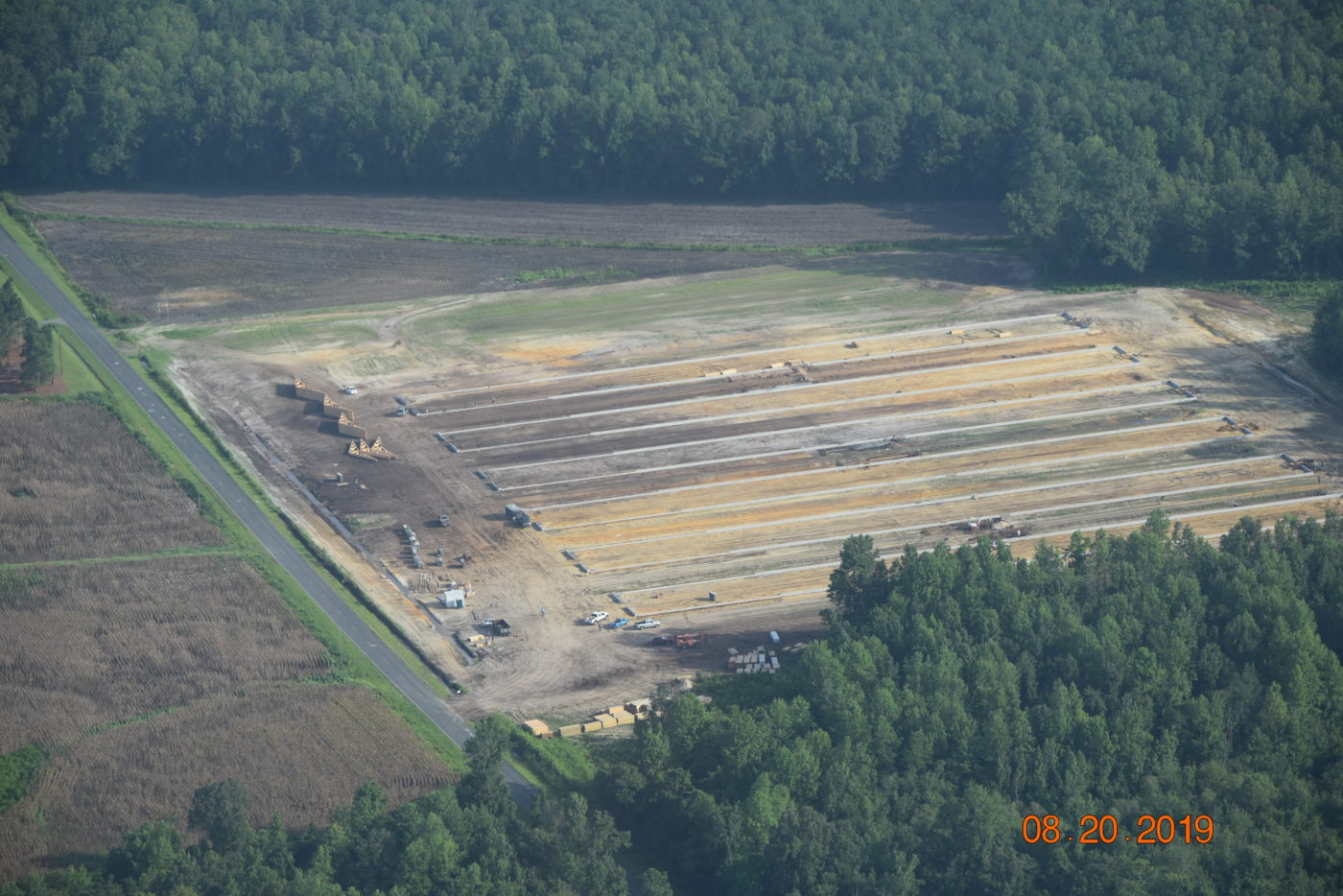 North Carolina’s unregulated poultry industry added enough barns in the year since Hurricane Florence to house at least 18.165 million more birds at a time in four watersheds alone, according to data from North Carolina Waterkeeper groups.

Even before its growth in the last year, North Carolina’s 515.3 million chickens and turkeys produced five million tons of waste annually — the largest source of nitrogen and phosphorus from animal waste in the state. Nitrogen and phosphorus pollution can cause toxic algal blooms, threaten drinking water, and harm fish and by decreasing the oxygen levels they need to survive.

Over the last year, the industry opened or began construction on 519 barns in North Carolina, North Carolina Waterkeeper groups have found. Each barn can house at least 35,000 chickens at a time. Turkey barns are just as crowded, but house fewer birds, because turkeys are larger. Waterkeeper groups have used the lowest number of birds per barn to calculate the expansion since Hurricane Florence.

There are no statewide records of where operations are, how many birds they keep, or how much waste they generate. Most of the operations store the poultry waste in large piles, then spread it on crop fields, where rain can easily wash it into nearby waters. The operations also produce industrial levels of air pollution.

“These factory operations are to the little family farm what a multinational steel mill is to a blacksmith,” says Lumber Riverkeeper Jefferson Currie II, who has been documenting the industry’s expansion in the watershed. “There’s never an announcement there’s going to be a poultry operation coming; we only know when there has to be a zoning change.”

In the absence of state data, North Carolina Waterkeeper groups, Waterkeeper Alliance, and the Environmental Working Group have been tracking the industry.

In the Lumber watershed, 17 new massive poultry operations have opened in the last year, which can collectively house 11.2 million birds, says Currie, whose organization is part of Winyah Rivers Alliance.

Factory poultry operations raise five generations of birds each year, growing them from chicks until they’re ready for slaughter in cycles slightly longer than two months.

“I’m willing to take folks on tours,” Currie said. “You have to see these factory operations to believe them.”

The Lumber watershed is already home to Mountaire’s Lumber Bridge processing facility, one of the largest chicken processing plants in the world. Its 3,000 employees work three shifts a day, seven days a week, producing more chicken by weight than any other plant in the United States. Only one chicken processing plant in California and one in China process more chickens per day. The plant processes about 2.5 million chickens per week — 130 million a year.

“The state must do more to regulate this industry,” said Yadkin Riverkeeper Brian Fannon, who has documented 40 new operations, with enough space to house 5.6 million birds at a time, in the watershed over the last year. “It’s unconscionable — and dangerous — that the people charged with protecting our air and water don’t even know where these operations are, or how many are in a single county.”

New operations on every flight

Cape Fear River Watch has tracked new operations in its watershed with at least 23 mega-barns, enough to house 805,000 birds.

Like other Waterkeeper organizations in the state, Cape Fear River Watch has been following the industry’s expansion using aerial photography, with the help of volunteer Southwings pilots.

There are no requirements that would keep new operations off the state’s floodplain. North Carolina spent $12 million composting 4.2 million turkeys and chickens that drowned, starved or died of illness following Hurricane Florence.

One new operation in the Broad River watershed, tracked by Broad Riverkeeper David Caldwell, is large enough to house 560,000 birds at a time.

“The poultry industry’s corporate integrators are profiting, while the public pays dearly,” Caldwell says. “The stench  of a chicken factory on a hot, still, evening; the overwhelming smell of chicken manure as a cyclist rides past a freshly spread field; and the negative effects to water quality — all these are shouldered by the general public. Yet the public has no input in where these facilities are located.”

Poultry operations in North Carolina that have opened or begun building since Hurricane Florence. Each barn can house at least 35,000 birds at a time.

Waterkeeper Alliance is a global movement uniting more than 300 Waterkeeper Organizations and Affiliates around the world, focusing citizen action on issues that affect our waterways, from pollution to climate change. The Waterkeeper movement patrols and protects over 2.5 million square miles of rivers, lakes and coastlines in the Americas, Europe, Australia, Asia, and Africa. For more information please visit: waterkeeper.org

Winyah Rivers Alliance is a grassroots organization dedicated to protecting, preserving, monitoring and revitalizing the health of the lands and waters of the greater Winyah Bay watershed and hosts the Lumber Riverkeeper and Waccamaw Riverkeeper programs.

Yadkin Riverkeeper’s mission is to protect and enhance the Yadkin River through education, advocacy and action. YRK works with communities throughout the watershed to assess and address threats to the river and identify and support opportunities to improve recreational access on the river. Our long term vision is to maintain a clean and healthy river and provide safe and enjoyable recreational opportunities.

Broad Riverkeeper is one of four Riverkeeper programs at MountainTrue, an environmental conservation non-profit based in Asheville. MountainTrue champions resilient forests, clean waters and healthy communities in Western North Carolina.  The Broad Riverkeeper works to protect and promote clean water in Rutherford, Polk and Cleveland counties through educating the public, recreational activities, and fostering stewardship of the waterways.