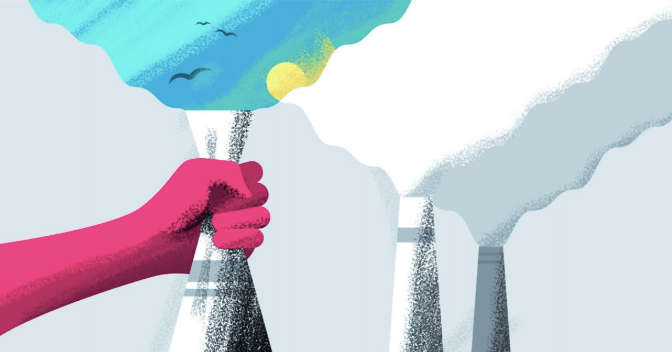 The campaign launches as Lemonade, an insurance company powered by AI, becomes the first U.S. insurer to commit to never invest in coal, urging other insurers to follow suit.

“We’re calling on our industry – our reinsurance partners, our competitors, and our colleagues in health and life insurance companies – to join us,” wrote Lemonade CEO and co-founder Daniel Schreiber in a blog published today. “[F]or insurance companies in the business of underwriting polluting projects we have a simple ask: please don’t.”

Insurers were among the earliest voices warning about climate change in the 1970s, recognizing the potential for sharply increasing risk in an uncertain future. Yet this knowledge hasn’t so far translated into preventative action.

“The insurance industry is supposed to protect us from catastrophic risk, yet when it comes to climate change, they’re adding fuel to the fire through their investments and underwriting,” said Lindsey Allen, Executive Director of the Rainforest Action Network and a partner of the campaign. “Our communities are the ones who are paying the price – through catastrophic wildfires, massive flooding, increased premiums, and denial of coverage.”

The insurance industry fuels climate change by insuring destructive fossil fuel projects like coal-fired power plants and the Keystone XL pipeline. It is also a major investor in fossil fuel companies. The 40 largest U.S. insurers hold over $450 billion in coal, oil, gas and electric utility stocks and bonds, making insurers more invested in fossil fuels than average index funds. Through these twin roles, insurers are quietly locking us into dirty energy infrastructure for decades to come.

Insure Our Future and Lemonade’s announcements became public during a panel at GCAS featuring California’s Insurance Commissioner Dave Jones and representatives from major insurers, climate advocacy and consumer organizations. The panel discussed the important role the insurance industry can play in decarbonizing the economy.

The campaign launches almost two months after 17 leading consumer, climate and social equity NGOs sent a letter to 22 major U.S. insurers, urging them to stop insuring and investing in coal and tar sands and to scale up their support for clean energy. Not one insurance company, including AIG (NYSE: AIG), Liberty Mutual, Berkshire Hathaway (NYSE: BRK.A), Prudential (NYSE: PRU) and MetLife (NYSE: MET), has so far substantively responded to the July 13 letter.

“Given your access to top-level climate science and your role in shaping modern industrial society as risk managers and investors, insurance companies must be part of this effort,” the July 13 letter reads.

Instead of ditching fossil fuels, insurers are currently abandoning communities that live in the path of climate risks. In California, for example, complaints of spiked premiums and loss of coverage in counties at risk of wildfires have tripled.

“Insurance companies are gouging and deserting policyholders in fire-prone areas while fueling those very wildfires,” said Jamie Court, President of Consumer Watchdog and a member of the campaign. “Insurance companies that complain about the problem need to be part of the solution.”

Insure Our Future is a new arm of the international Unfriend Coal campaign that has driven significant coal exclusion policies from major European insurers. In the last three years, 17 large international insurers have divested about $30 billion from coal companies, and six have stopped or limited insuring the coal industry, including Allianz, Axa, Zurich and Swiss Re.

“Given the momentum in the international insurance industry, which includes decisive shifts by some of the world’s largest insurers, action by the U.S. insurance industry is long overdue,” the July 13 letter said.

The increased intensity and frequency of extreme weather (such as hurricanes, wildfires and floods) and rising sea levels means more people and businesses are filing insurance claims. The 2017 Northern California wildfires generated $12.6 billion in insurance claims, and the 2017 Atlantic hurricane season was the most costly ever, racking up more than $200 billion in damages.

Some municipalities and businesses are taking note of the insurance industry’s inaction. In July, the San Francisco Board of Supervisors became the first municipal body in the U.S. to pass a unanimous resolution urging the city to end partnerships with any insurer that doesn’t divest from and stop underwriting coal and tar sands.

“When it comes to fighting climate change, U.S. insurance companies are missing in action. That’s inexcusable for an industry based on managing risk,” said Ross Hammond, Senior Campaign Advisor to the Sunrise Project. “We’re inviting the public, insurance regulators, and major policy holders – like businesses and cities – to join us in demanding U.S. insurers change course before it’s too late.”

About Lemonade
Lemonade Insurance Company is a licensed insurance carrier, offering homeowners and renters insurance powered by artificial intelligence and behavioral economics. By replacing brokers and bureaucracy with bots and machine learning, Lemonade aims for zero paperwork and instant everything. As a Certified B-Corp, where underwriting profits go to nonprofits, Lemonade is remaking insurance as a social good, rather than a necessary evil. Lemonade is currently available for most of the United States, and looks to expand globally.

About the July 13 Letter