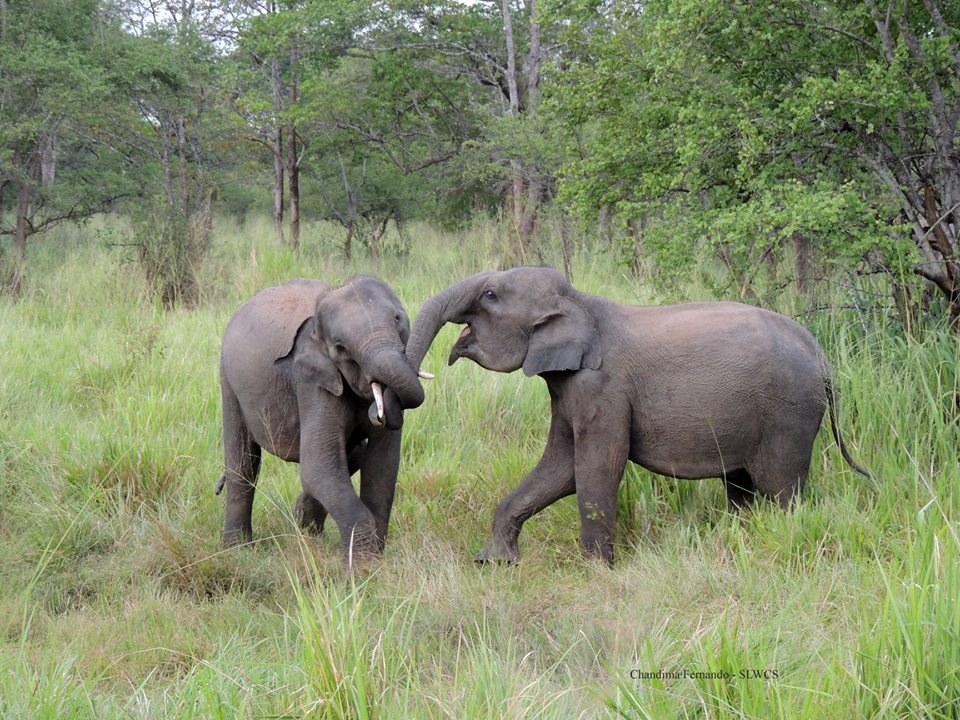 In the ancient tale of Ramayana, a bedtime story for every Hindu and Buddhist child, the demon king of the land of Lanka abducts Vishnu’s wife, imprisoning her in his kingdom. Today, the land of Lanka is known as Sri Lanka, and what’s been spirited away is water.

As humans take more water from the 208-mile-long Mahaweli River, the lifeblood of this Indian Ocean island nation, there’s less for wild animals. The scarcity is causing deadly confrontations between native elephants and frightened villagers, confrontations that grow more frequent during the dry season, when the roaring Mahaweli dries up to a thin trickle of water that winds through a vast river of sand.

Each adult elephant requires about 100 to 300 liters of water a day. In the past 50 years, Sri Lanka built reservoirs and dams, blocking the elephants’ access to water and displacing thousands. The elephants began raiding wells and storage tanks in the villages that encroached on their habitat. The raids have become more common, especially in the rapidly developing farmland near Wasgamua National Park.

When thirsty elephants storm the world of humans, it often ends tragically: Approximately 225 elephants and 60 to 80 people are killed each year during these confrontations.

The elephants would break down houses and walls to get to food, breaking into farmers’ storehouses, gobbling down a year’s worth of harvests, then destroying more homes on their way back.

“The conflict between elephants and humans has escalated mainly due to habitat loss,” says Ravi Corea, the Mahaweli River Waterkeeper. “As half the forests in the Mahaweli basin have been lost to large-scale agricultural development.”. In the smaller lower basin, the human population has grown by 400,000 in the past 20 years, causing the destruction of an even greater proportion of forest to agricultural, hydropower, and reservoir development.

Ravi, who believes in working “with” rather than “for” communities on conservation, founded the Sri Lanka Wildlife Conservation Society in 1995 and started the Saving Elephants by Helping People project in 1997, which represents one of the best-known, community-based efforts to mitigate human-elephant conflict in Sri Lanka.

Since he became the Mahaweli River Waterkeeper, he’s expanded the work.

Ravi and his team of researchers found that elephants naturally avoid the strong scent of citrus plants. So since 2009, he’s helped 203 farmers plant 8,000 citrus trees in 14 villages to create a natural border between them and the elephants. In addition to keeping the elephants away, the citrus trees provide supplementary income for the farmers. As Project Orange Elephant gained popularity, Cargills Fruit City, one of the leading supermarket chains in Sri Lanka, offered to buy all the oranges that the farmers produced.

Project Orange Elephant has helped these villages in Sri Lanka decrease the human-elephant conflict, and its current goal is to plant 50,000 trees along the southern border of the Wasgamua National park, creating a living deterrent.

In addition to planting citrus trees, Ravi and his team have provided an EleFriendly Bus to villages in or near paths frequently used by elephants. The EleFriendly bus makes its way through 12 villages and serves around 120 students per day. The children are learning to love the elephants rather than fear them, and the elephants can freely use their ancient corridors.

Ravi is also planning to study the health of the Mahaweli, where sand mining affects the flow and depth of Mahaweli during the dry season.

As for the elephants, Ravi’s long-term goal is to stop people from harassing elephants during the dry season, so elephants can access man-made lakes without fear of being injured or killed. It is not a common sight, he says, but “sometimes you can see elephants drinking and bathing on one side and humans washing their clothes on the other side.”

The conflict between humans and elephants may seem to be the result of human encroachment on elephant territory—but it’s more than that. It’s agricultural development, habitat loss, declining water quality, loss of access to water. It’s all the things humans have spirited away from elephants, as if they were angry gods. Ravi’s goal, and his hope, is to return the water, making peace between people and their mammalian cousins, the elephants.