Clean water was *literally* on the ballot on November 3 for many counties and states across the United States. Local and state ballot initiatives asked voters directly about how their government should prioritize funds and manage pollution, and in many places, voters chose clean water in overwhelming numbers.

These local clean water wins might have been lost in the avalanche of news about the presidential election, so we’ve collected a couple of the Waterkeeper-supported wins here for you to celebrate.

In Georgia, Waterkeepers across the state united with other clean water and environmental advocacy groups to encourage Georgians to “Vote Yes on 1,” a state constitutional amendment that ensures funding allocated to tire and hazardous waste cleanups will be used for their intended purposes. Ahead of the election, Upper Coosa Riverkeeper Jesse Demonbreun-Chapman told us:

“Georgia Water Coalition has worked to dedicate environmental cleanup fees for over a decade. We were thrilled to finally cross the final legislative hurdle this year and are eager for Georgia’s voters to weigh in with their vote. It’s high time we make sure millions of dollars are no longer diverted from hazardous waste, landfill, and tire dump cleanups.”

Voters chose clean water and Amendment 1 passed with almost 82 percent of the vote! 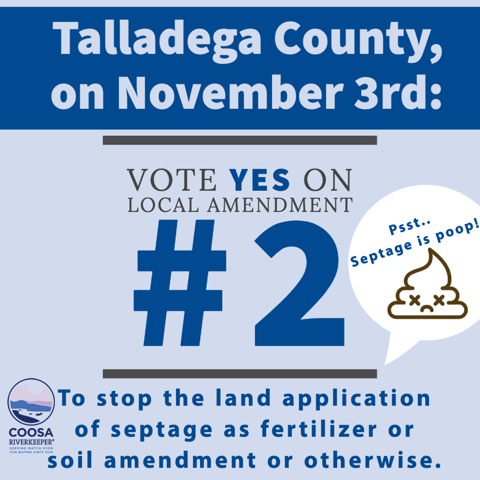 In Alabama’s Talladega County, Justinn Overton, the Executive Director and Interim Riverkeeper at Coosa Riverkeeper, spoke to local news encouraging voters to pass Amendment 2, which would prohibit the spreading of human waste through dangerous sewage reuse practices. She explained her concerns about the impact to water quality in neighboring towns, for both the economic and public health effects:

“Between this area and the river you’ve got tons of households, children, and families that may be recreating on the Coosa River, unknowingly in the by-products of human waste…In Alabama, our state motto is we dare to defend our rights. And in conjunction with that, Alabama is the river state. So Coosa Riverkeeper encourages folks in Talladega County to vote yes on Amendment 2 on election day.”

It was a big year for environmental ballot initiatives, and we’re proud that Waterkeepers played their part. These successes demonstrate how great a tool ballot initiatives are for public charities to engage voters and push their issues forward.