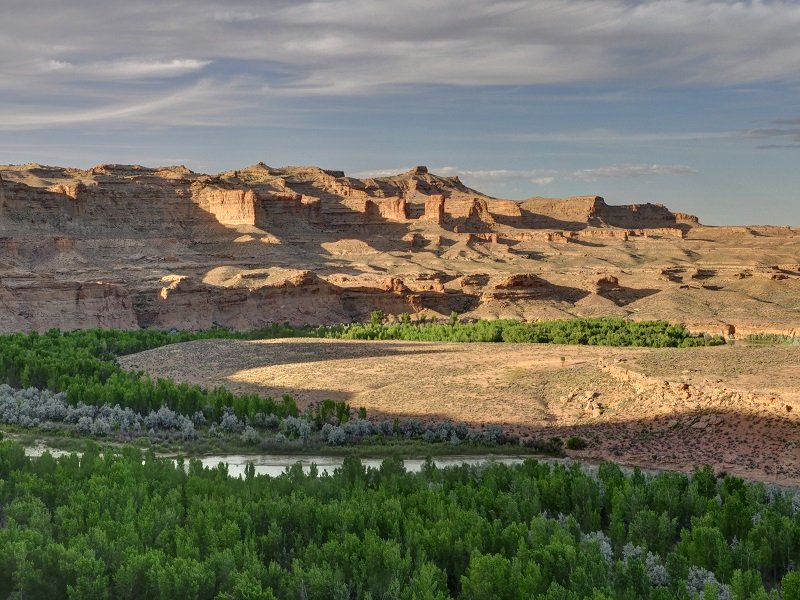 Conservation groups today sued the Trump administration to challenge what would be the nation’s first commercial-scale oil shale mine and processing facility. The lawsuit says officials failed to protect several endangered species when they approved rights-of-way across public lands to provide utilities to the proposed oil shale development.

Today’s lawsuit, filed in U.S. District Court in Utah, argues that the U.S. Fish and Wildlife Service violated the law by ignoring the potential harm to endangered fish. In its biological opinion, the agency considered only the harm from water depletions necessary to build the pipeline, not the billions of gallons of Green River water that will be sent through the pipeline to Enefit’s oil shale development.

The Bureau of Land Management also violated the law by failing to adequately analyze the significant environmental impacts of the proposed oil shale development, which likely would not occur but for the agency’s approval of the rights-of-way.

“This is a prescription for disaster for our climate, wildlife, and the Colorado River Basin,” said Ted Zukoski, a senior attorney at the Center for Biological Diversity. “Draining the Green River to mine one of the most carbon-intensive fuels on the planet sends us in exactly the wrong direction. It’s putting us on a collision course with climate catastrophe so a foreign fossil-fuel company can make big bucks.”

The Trump administration paved the way for the project last year by approving rights-of-way for electricity, oil, gas, and water lines across public lands. At full buildout, the Estonian-owned Enefit American Oil facility would produce 50,000 barrels of oil every day for the next 30 years or more from the Green River Formation.

“The environmental destruction, air pollution and water pollution inherent in this proposed oil shale mining project is something that every citizen of Utah should be alarmed about,” said Dr. Brian Moench, president and founder of Utah Physicians for a Healthy Environment. “That it would become a long-term public health disaster is being callously dismissed by a BLM that is being run as a subsidiary of the dirty energy industry.”

Huge amounts of water are required in the oil shale production process. The water pipeline will allow Enefit to drain more than 10,000 acre feet annually from the Green River, harming critical habitat for endangered fish, including the Colorado pikeminnow and the razorback sucker. The project comes as Western states struggle with record droughts and climate-driven declines in river flows in the Colorado River Basin.

“Our region is already feeling the effects of pollution and climate change. To destroy our public lands in order to drill for more polluting fossil fuels would be a disaster for our communities and our planet,” said Dan Mayhew, conservation chair of the Utah Chapter of the Sierra Club. “We should be accelerating the transition to clean energy, not sacrificing our water, air quality, and climate for an investment in one of the dirtiest fossil fuels in the world. Today we continue the fight to ensure that federal agencies can’t continue to approve dangerous, dirty energy projects without fully considering the totality of environmental damage that would result.”

Enefit intends to strip-mine about 28 million tons of rock a year over thousands of acres of high-desert habitat, generating hundreds of millions of tons of waste rock. It will also construct a half-square-mile processing plant, about 45 miles south of Dinosaur National Monument, to bake the rock at extremely high temperatures to turn pre-petroleum oil shale rock into refinery-ready synthetic crude oil. That will require vast amounts of energy and emit huge amounts of ozone precursors in an area recently listed by the U.S. Environmental Protection Agency as not in attainment with healthy ozone standards.

“The responsible federal agencies have worn blinders in approving this project, leaving themselves and the public in the dark about the immense ecological harm it would cause,” said Alex Hardee, associate attorney at Earthjustice. “We’re going to court to uphold the nation’s environmental laws and save the Upper Colorado River Basin from the devastating effects of oil shale.”

Oil shale is one of world’s most carbon-polluting fuels, with lifecycle carbon emissions up to 75 percent higher than those of conventional fuels.

“BLM’s approach here is to ignore the elephant in the room, which never ends well,” said Ann Alexander, senior attorney with Natural Resources Defense Council. “They’ve focused exclusively on the relatively small impact of building some power lines and pipes, hoping no one will notice that this infrastructure will facilitate large-scale environmental destruction. Well, we noticed.”

The project would produce 547 million barrels of oil over three decades, spewing more than 200 million tons of greenhouse gas — as much as 50 coal-fired power plants produce in a year. Those emissions would contribute to global warming and regional drought already afflicting the rivers and their endangered fish.

“Enefit’s proposed oil shale operation could deplete more than 100 billion gallons over three decades,” said Sarah Stock, program director at Living Rivers. “That’s water taken away from other current water users and the downstream river ecosystem. The BLM needs to stop side-stepping their responsibilities by ignoring the devastating impacts that oil shale development will have on the climate and downstream water availability in the Colorado River Basin.”

“As a result of mismanagement, drought, and accelerating climate change, the Colorado River system is on the verge of collapse,” said Daniel E. Estrin, advocacy director at Waterkeeper Alliance. “Yet despite this crisis, BLM and FWS have approved rights-of-way across public lands for a project that could remove 100 billion gallons of water from the basin, push several endangered species closer to extinction, and rapidly degrade the water supply of almost 40 million people. These approvals, that will allow an Estonian hard rock oil shale company to exploit US public lands and resources, must be reversed.”

“The BLM approved the rights-of-way to service Enefit’s proposed oil shale mine and processing facility based on an utterly inadequate analysis of potentially devastating air, water, climate and species impacts,” said Michael Toll, a staff attorney at Grand Canyon Trust. “Considering the rights-of-way are a public subsidy of an otherwise economically unfeasible oil shale development, the public has a right to know exactly how Enefit’s project will impact their health and environment.”

*White River, near the location of the proposed rights-of-way. Photo by Ray Bloxham, Southern Utah Wilderness Alliance. This image is available for media use.