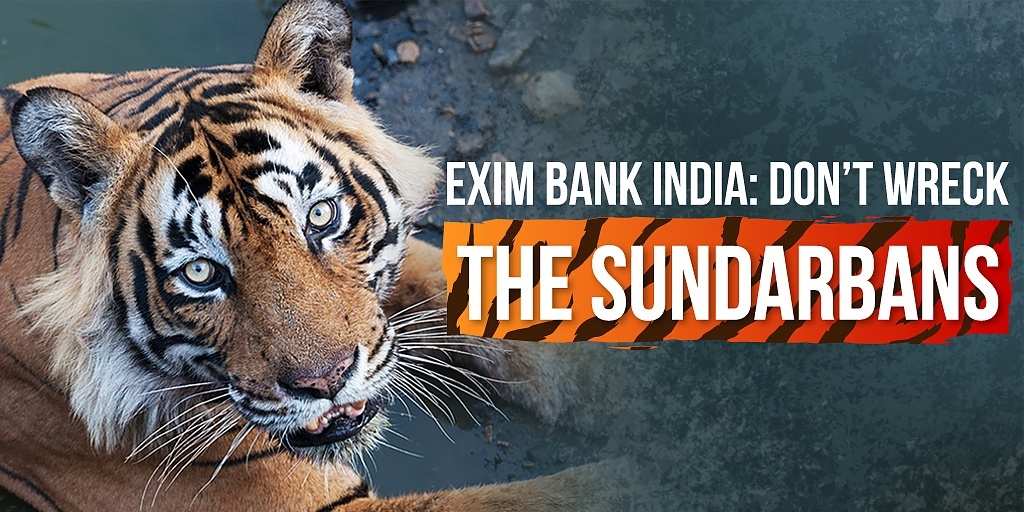 Nijmegen, Netherlands – A global coalition including BankTrack, Greenpeace International, Rainforest Action Network, and Indian and Bangladeshi civil society groups today issued an urgent appeal to the Export-Import Bank of India to abandon its plans to finance the construction of the Rampal coal power plant in Bangladesh and save the world-renowned Sundarbans wetlands from destruction.

The open letter calls on Exim Bank of India to live up to its own promise to ‘recognize its obligations as a citizen of the world’ that acts ‘with due regard to public interest’, and therefore not to support the destructive Rampal coal plant.

The Exim Bank of India currently intends to provide a USD 1.6 billion loan to the sponsor of the project, the Bangladesh-India Friendship Power Company Ltd, a joint venture between the Indian and Bangladeshi state-owned electricity providers (the National Thermal Power Corporation, NTPC, and the Bangladesh Power Division Board, BPDB, respectively). The bank is rumoured to be taking a final decision on the loan by July 2016.

The 1,320 megawatt Rampal power plant, already under construction, is located just 14 kilometres from the edge of the Sundarbans Reserve Forest, a UNESCO World Heritage area and a Ramsar wetlands site. Critics of the project point out the potential for widespread contamination of the extraordinarily rich ecosystem of the Sundarbans, which would risk wiping out the endangered Bengal tigers, of which only around 100 individuals remain in the forest, as well as affecting numerous other species. Over two million people living in and around the Sundarbans ecosystem also find their livelihoods threatened by the project. The coal plant would emit more than 7.9 million tons of CO2 annually for 25 years, taking a heavy toll on the climate.

Exim Bank of India is considering financing the project despite the fact that its location means it would not meet environmental standards for large power plants in India. Indian Environment Ministry rules state that coal power plants should not be constructed within 25 kilometres of the outer periphery of national parks, wildlife sanctuaries and other ecologically sensitive areas such as tropical forests and biosphere reserves.

Soumya Dutta of the Indian People’s Science Campaign, Bharat Jan Vigyan Jatha, said: “This plan shows the Indian government and state-owned NTPC to be violating their own norms and basically committing a huge crime against the people and the ecosystem of the Sundarbans. If the Export-Import Bank of India proceeds with this extremely large loan, it will be an accomplice to this crime. This single coal power plant will boost Bangladesh’s total CO2 emissions by roughly 15%, and this in a nation that has a great potential to develop renewable energy sources”.

Sharif Jamil, founding member of National Committee for Saving the Sundarbans (NCSS), Coordinator of Waterkeepers Bangladesh and Joint Secretary of BAPA (Bangladesh Poribesh Andolon), a coalition of Bangladeshi environmental organisations, expressed his concerns on the climate impact of the project: “It is shocking to hear Bangladeshi officials say coal is clean while most of the rest of the world has identified coal as a dirty fuel and is in the process of shutting down coal plants. It is frustrating when India promotes renewable energy for both economic and social development domestically but is intent on bringing coal-based industries from India, threatening our lives and unique nature. I have seen recently that thousands of people in the fishermen community, dependent on the Passur River, are worried about their livelihood.”

Catalina von Hildebrand, climate and energy campaigner at BankTrack, said: “If Exim Bank of India is serious about being a responsible citizen of the world, it will not finance a project which would wreak havoc on both local communities and the world’s climate. Coal plants such as Rampal are a thing of the past. India Exim should start positioning itself as an institution that lends for the future and thus abandon its plans to finance the Rampal coal plant.”

BankTrack is inviting concerned organisations from around the world to join the Global Call on Exim Bank of India requesting that the bank declines to finance Rampal in order to help reduce harmful impacts on the Sundarbans.
For further inquiries and interview requests, please contact:
Catalina von Hildebrand, [email protected], 0031-24-3249220