How the New Trump Rule Would Harm San Francisco Bay

San Francisco Bay’s watershed stretches from the granite tips of the Sierra Nevada to the Golden Gate, covering almost 60,000 square miles and nearly 40 percent of California. Half of California’s surface water supply falls as rain or snow within the watershed, frequently as “ephemeral” or intermittent streams, creeks, and marshes that flow with the seasons.

Staff Scientist Ian Wren soon realized that the proposal would strip protections from the headwaters of creeks and rivers and numerous streams that feed the California Delta and San Francisco Bay. 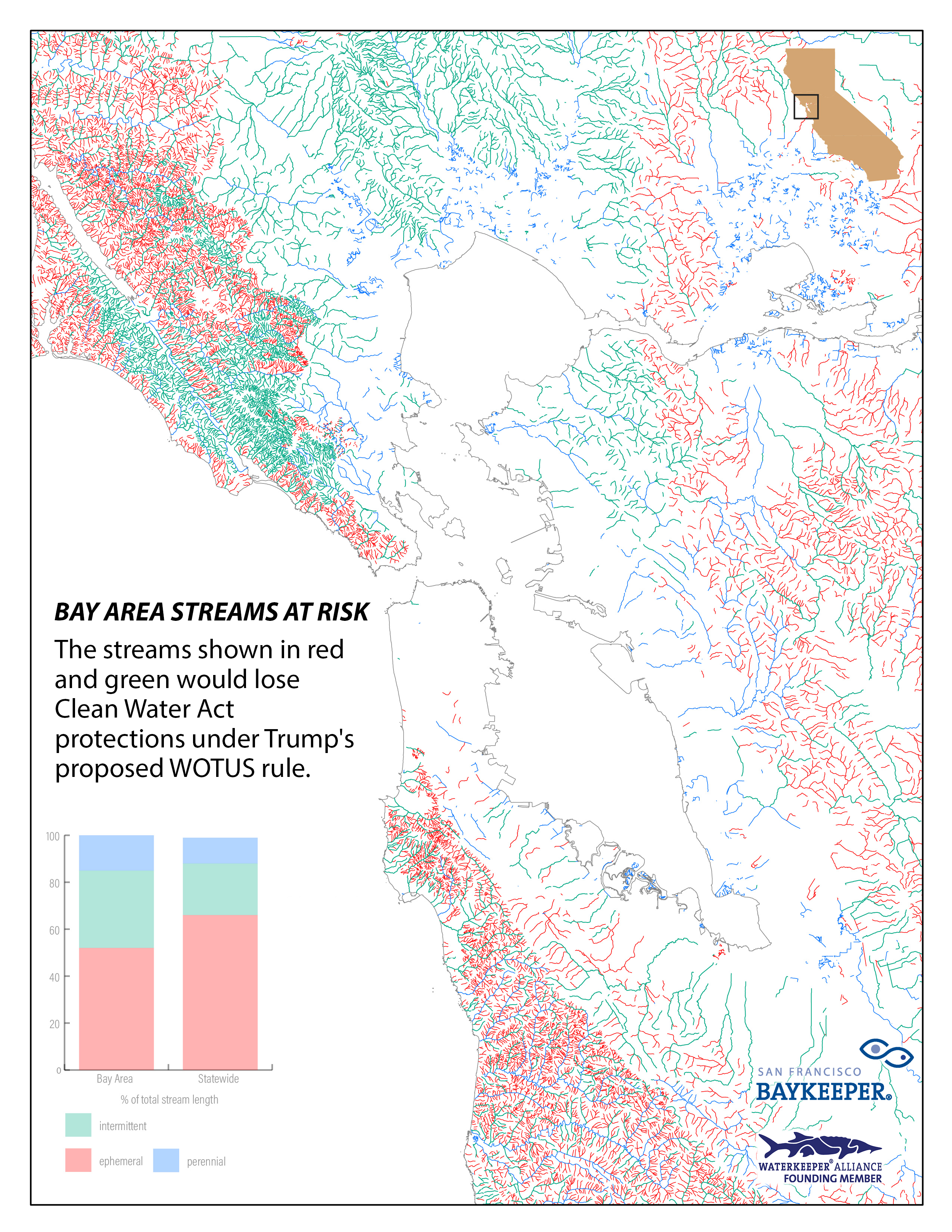 Some of those creeks and streams are already threatened by pollution, development, mining, and agriculture. Loosening environmental protections would harm these already fragile waterways and add to the threat faced by the watershed’s six endangered fish species. Endangered Chinook salmon, for example, rely on ephemeral and intermittent streams as spawning grounds.

Removing protections could also lead to creek filling, accelerated erosion, and contamination threatening the survival of numerous other native species.

If these waters were to lose Clean Water Act protection, it might also harm some of the state’s stream-fed reservoirs in the San Francisco and Silicon Valley region, which supply drinking water for millions of people. “The whole watershed is connected, so it’s conceivable that we could see an impact on the quality of our drinking water, too,” Ian says.

Water is already a contentious issue in drought-plagued California. This is a state where an  agency’s vote to increase flows to the Bay was immediately followed by court challenges from industrial farmers, irrigation districts, developers, and water suppliers all fighting to maintain—or increase—their share of the waterways.

The Clean Water Act has been a monumental force of good for the health of the Bay-Delta estuary. The water quality of the flows that make it through the Delta to the Bay has been steadily improving since the Clean Water Act was adopted, and groups like Baykeeper have taken actions to enforce the law. These protections have been especially significant in reducing harmful visible pollutants like raw sewage, oil, and trash.

The Clean Water Act also ushered in a shift in how the Bay was perceived—from a dumping ground to a protected natural resource.

“Before the Clean Water Act, there used to be signs around the Bay that instructed beachgoers and boaters to throw their trash in the water, and sewage pollution was so bad that swimmers would get sick from spending time in the Bay,” says Sejal.  “Thankfully, it’s understood now that we all need to be better stewards of our waterways. Sadly, the Trump administration’s new rule would reverse a lot of the progress that’s been made protecting the water flowing through the Delta and San Francisco Bay.”

Don’t let Trump walk back Clean Water Act protections for the waters that feed San Francisco Bay! You can take action to preserve the precipitation-fed reservoirs, creeks, and streams that nurture endangered Chinook salmon and many other species (including people!). Act now to protect fish, protect drinking water, and protect the Clean Water Act. Submit comments to EPA to fight proposed rollbacks to Clean Water Act protections, and urge your friends to take action as well.  #SaveTheCleanWaterAct.

*Feature image of kitesurfer and Golden Gate Bridge by Robb Most.