Buck Ryan, the Snake River Waterkeeper, put it this way, “Removing hydroelectric dams is progress—we no longer have to destroy rivers and kill endangered fish to keep the lights on.”

As I paddled my kayak amidst the hundreds of people in the Free The Snake flotilla last weekend, I believe Ryan is on the right track. Dams are a 50 to 100 year old technology—it’s time to remove even more dams along America’s diminished waterways and replace that aged technology with flourishing solar and wind energy systems. 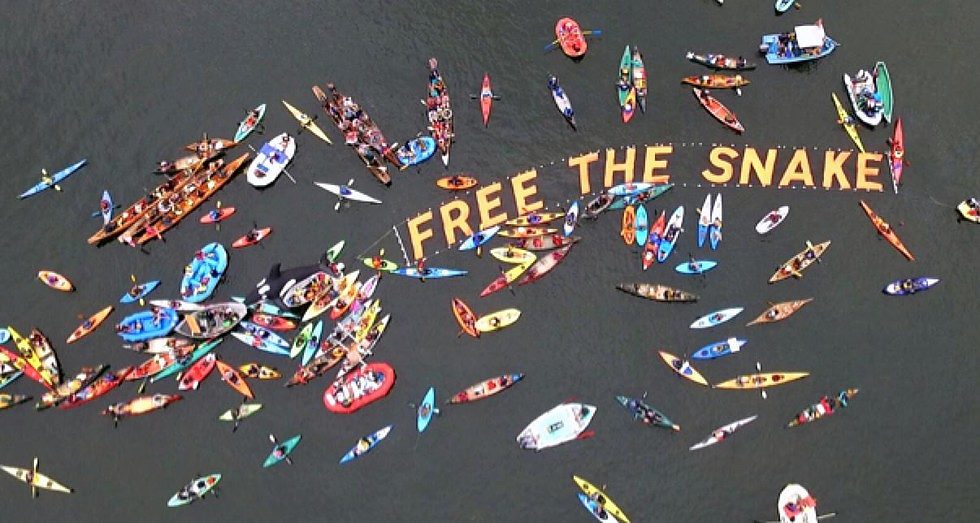 2016 was the second year for the Free The Snake flotilla. Co-sponsored by more than a dozen non-profit groups and organized by Save Our Wild Salmon and Patagonia, the flotilla took place on the Idaho border on the Snake River. Four huge dams on the lower Snake River have contributed to several species of salmon being placed on the endangered species list. Removing the dams would help restore the salmon and a way of life in the Snake and Columbia River basins. 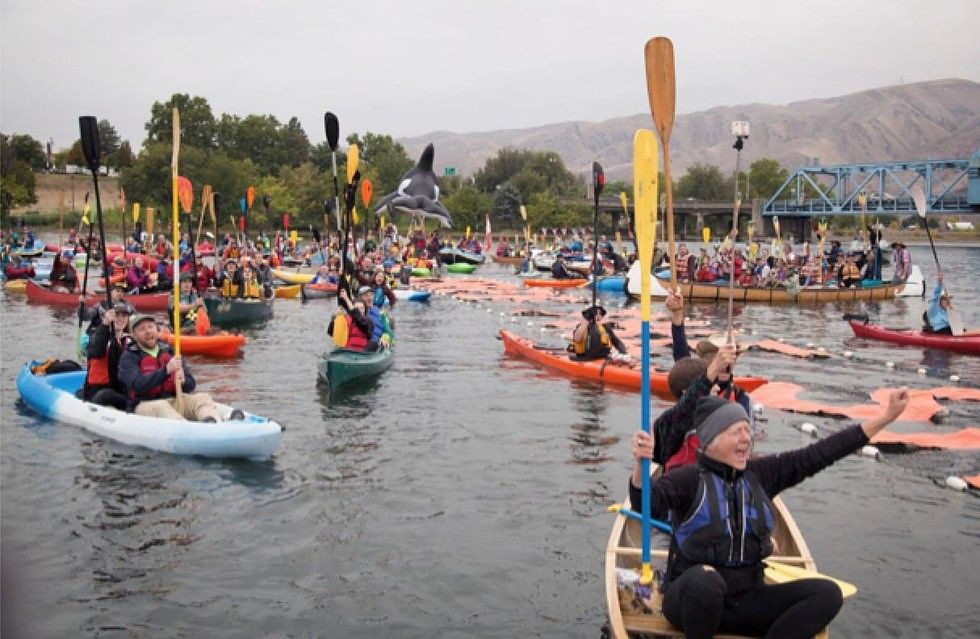 The flotilla included participation from river conservation and fishing groups, native American tribes and local businesses, all who have a stake in seeing the lower Snake River dams removed. Since the dams were built more than 30 years ago, only about 1 percent of salmon return from the sea to their native spawning grounds along the river. Historically, around 8 million salmon would return from the sea, swim up the Columbia River and then up into the Snake. That number is now down to around 80,000. Further, the vast majority of those fish are bred and stocked every year, with few or none being original wild salmon.

“Bigger and better, this year’s flotilla underscores the public support for restoring this river and bringing these critical salmon species back to our environment,” Joseph Boggard, director of Save Our Salmon, said. 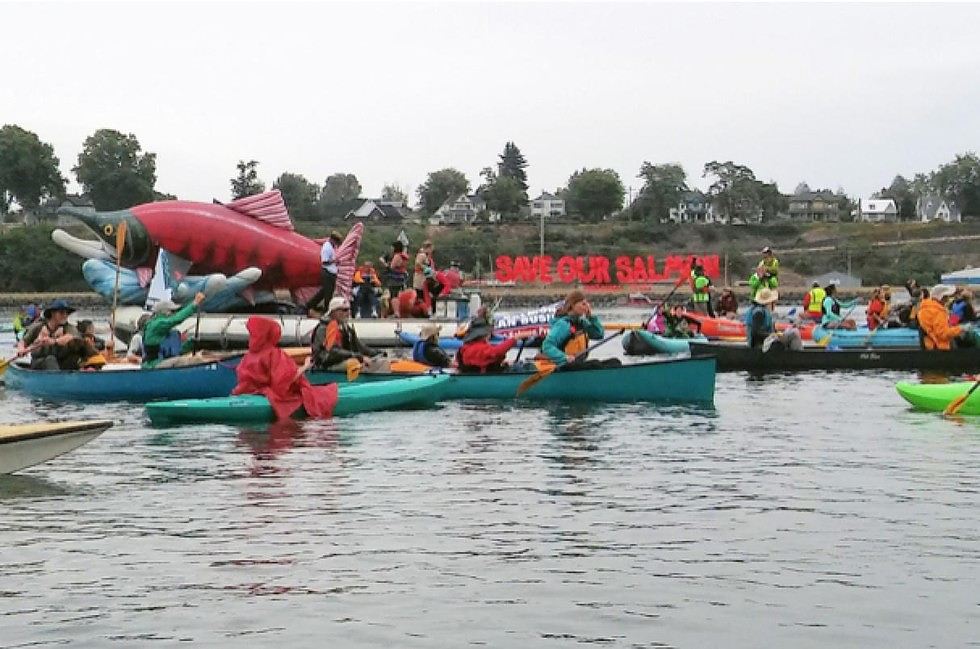 The 300-person flotilla had the wind at its back, literally and figuratively, as it floated down the river towards the Clarkston-Lewiston bridge. In May of 2016, a federal district court judge ruledthat the Endangered Species Recovery Program for the salmon was “illegal” and needed to “consider all recovery options” including “dam removal.” Save Our Salmon has been litigating on the behalf of the endangered salmon for nearly two decades and is thrilled at the court’s decision.

A new recovery plan must be developed by the federal agencies. Conservation groups have vowed to crank up the “dam removal” campaign. Further, the Snake River Waterkeeper recently filed another notice of intent to sue to address the pollution and temperature problems in the river.

“We’ve opened up another legal front in our fight to protect the salmon and take down these dams,” said Ryan. 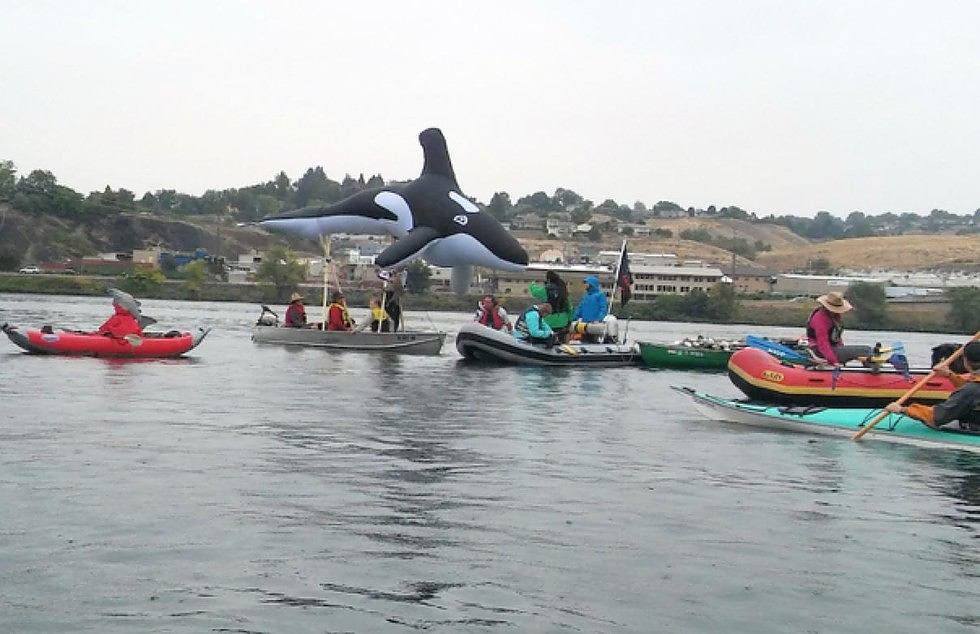 The crowd chanted and drummed as it floated down the river. Leading the flotilla was a giant inflatable killer whale to symbolize the threat to ocean species from the massive decrease in salmon populations. In fact, the Southern Resident Killer Whales—which live part-time in Puget Sound—are endangered because their food supply has been depleted. This species of killer whale lives entirely by eating fish and migrating along the coast down to northern California and back up to Puget Sound. Historically, this population of killer whales almost exclusively ate salmon, but as the salmon numbers dwindled, killer whale numbers have dramatically decreased as well, down to 82 animals, which has put them on the endangered species list.

“With all the negativity that surrounds trying to save an endangered species, everyone that took part in the Snake River flotilla sent a strong message today that is proof positive that we can right this ship,” said Shari Tarantino, director of the Orca Conservancy, which is trying to restore the Southern Resident Killer Whales. 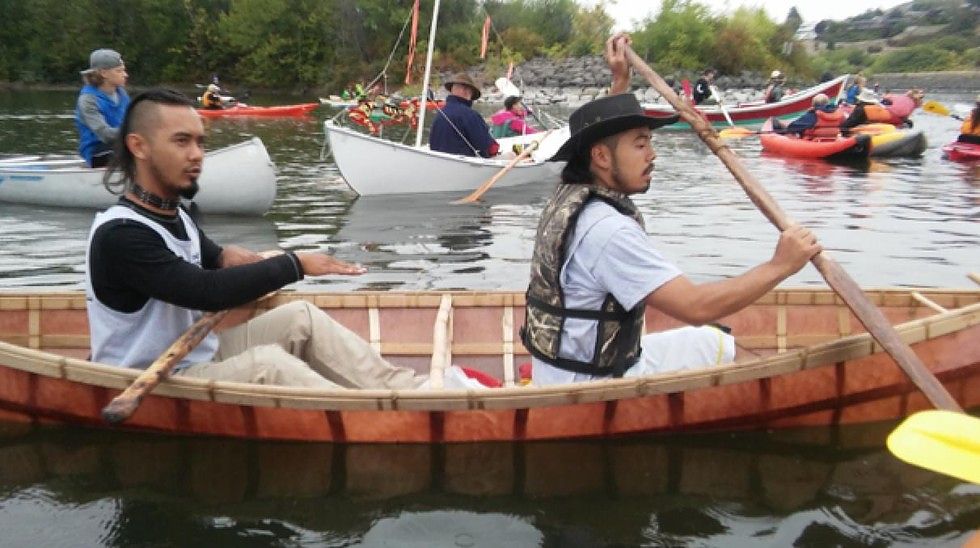 Some of the tribal members at the Free The Snake Flotilla had just returned from the Dakota Access Pipeline flotilla and were excited to keep their boats in the water supporting the cause of justice and environmental restoration. The rainy day deterred no one’s enthusiasm, including the five different tribes that participated in the event.

In addition to sending a message to the Army Corps of Engineers and Bonneville Power Administration which now must write a new recovery plan for the salmon, the flotilla also sent a strong message to the local communities that removing the dams would be good for the river and the economy.

“It’s great to have hundreds of boaters on the water showing Clarkston and Lewiston that the public supports dam removal,” said Samantha Mace of Save Our Salmon. 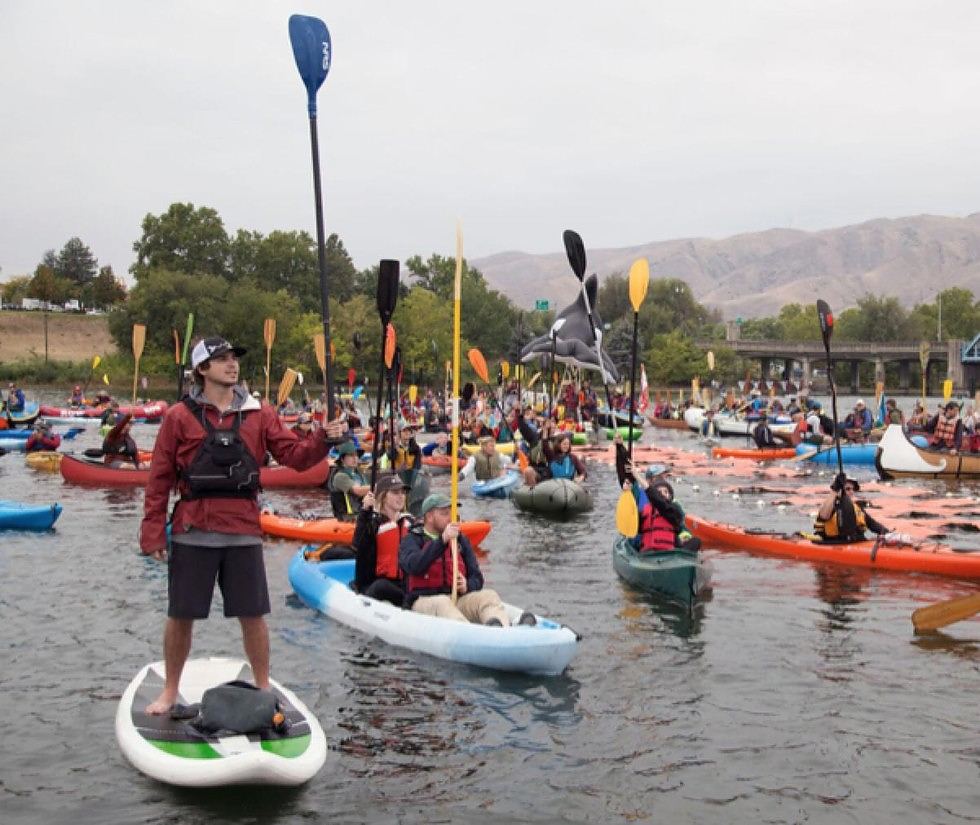 As the 3-hour even wound down, the chanting and drumming increased and I came to believe that it’s not if, but a matter of when, the Snake River dams come down.