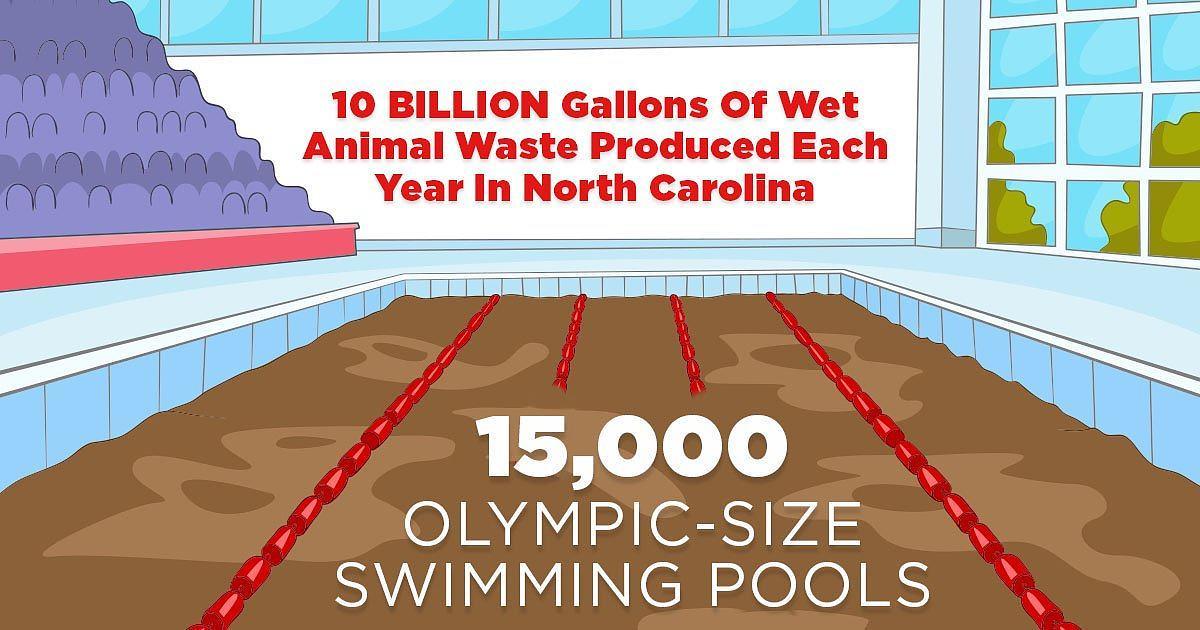 In addition to swine and cattle CAFOs, the project documents the locations of over 3,900 poultry operations, which up until now have been shielded from the people of North Carolina.

The maps, which EWG and Waterkeeper Alliance researchers constructed over more than three years, provide a never-before-seen aerial view of the CAFOs blanketing the state. This includes the manure lagoons from swine operations, detailing how close they are to streams, rivers and other public water sources.

The maps feature satellite photos of each of the thousands of facilities.

The unprecedented mapping project identifies approximate locations of all swine, poultry and cattle CAFO operations in the state, as well as the size of the operations. The online maps allow users to view total estimated waste outputs on a facility, watershed, county or statewide scale. All told, researchers from the groups estimate more than 10 billion pounds of wet animal waste and 2 million tons of dry animal waste is generated annually in North Carolina from CAFOs, leaving tens of thousands of rural residents susceptible to air and water quality contamination.

“For far too long, North Carolinians have been kept in the dark about the true impact these industrial factory farms are having on communities and waterways,” said Marc Yaggi, executive director of Waterkeeper Alliance. “Information is power and now that these sites are definitively identified, we will hold accountable the North Carolina Department of Environmental Quality and the U.S. Environmental Protection Agency for enforcing the Clean Water Act and fixing these massive pollution problems.”

“Animal agriculture operations are one of the leading sources of water and air pollution in the country and are making people sick,” said Ken Cook, president and co-founder of EWG. “These maps show for the first time, that thousands of CAFOs and the animal waste they produce are often adjacent to communities and vital water sources.”

In 2015, the United States Geological Survey (USGS) and the N.C. Department of Environment and Natural Resources published a wide-ranging study showing elevated levels of both nitrates and ammonia in waterways near hog CAFOs in eastern North Carolina. Researchers behind the three year USGS/DENR study found that “animal feeding operations have measureable affects on stream water quality in many agricultural watersheds in the North Carolina Coastal Plain” with nearly 60 percent of the watersheds where CAFOs are located having “distinct differences in water quality reflecting swine and/or poultry manure effects.”

Nitrates at high levels in waterways can kill off fish, and when ingested through contaminated drinking water can cause the potentially fatal “blue baby syndrome” in infants, among other illnesses in humans.

Hog manure pits also contain a mix of dangerous pathogens, like Salmonella and pharmaceuticals, among many other agents that can leach into surface water sources.  As the maps show, there are more than 4,100 manure pits in North Carolina, with nearly 50 percent of them located Duplin and Sampson counties alone.

Beyond the threat to water, the air in the communities next to many of these CAFOs is often polluted, too. The odor from the hog manure stored in these pits, a mix between rotten eggs and ammonia, regularly drifts into adjacent neighborhoods and homes, forcing residents to cover their mouths and noses with masks when outside. Studies, including one from researchers with the Robert Wood Johnson Foundation and the University of Michigan, found the ammonia released into the air from swine CAFOs in North Carolina “is potentially hazardous for nearby human populations at community locations, particularly homes and schools.”

Additional research has shown the air pollution from CAFOs like those in North Carolina can elevate the risks for respiratory problems, eye and nose irritation, and increased mental stress for those who live and work near these animal feeding operations.

The noxious fumes from CAFO operations in Halifax County have sometimes forced nearby residents, who could afford it, to stay in area motels until the plumes that hung over their homes passed.

Other serious health problems associated with these animal agriculture operations include the growing threat of superbugs that are resistant to antibiotics. According to the Pew Charitable Trust’s Antibiotic Resistance Project, roughly 70 percent of all antibiotics in the U.S. are used on hogs, chickens and cattle to make them grow faster. Estimates show farm animals in North Carolina receive more antibiotics than all Americans combined.

The map project also highlights key information, including statistics, that has never before been made available:

Sam Perkins, the Catawba Riverkeeper, regularly flies over his basin in the Piedmont of North Carolina. “We have 1,000 poultry houses in the Catawba River basin in North Carolina,” he stated. “With the public record exemption afforded by state regulations, the industry has exploded throughout this beautiful region, and these maps finally show just how extensive that growth is. Many of these operations cannot even take the simple measure of covering their waste piles with a simple tarp to prevent runoff. Downstream of many of these sites, the Catawba River is dammed into lakes, which serve as major regional drinking water reservoirs and provide tens of billions of dollars of property tax base critical to local economies. The toxin microcystin produced by harmful algal blooms – like those seen in eastern North Carolina and in Toledo, Ohio – fueled by nutrient runoff from these sites, would be disastrous for the Charlotte region.”

Elsie Herring is a Duplin County resident affected by CAFO pollution. “For the first time, I can see a map of the entire state and look at where I live in the southeastern part and see the overwhelming concentration of these facilities in my community,” Herring said. “On a local level, we now have the tools and information we need to protect ourselves and our waterways from the very real impacts of these facilities on our health, homes and community. This will force this industry to finally have transparency, as its lasting impact is projected and amplified for all to see.”

The map project will be housed on Waterkeeper Alliance’s and Environmental Working Group’s websites, and will continue to be developed. Over the weeks and months ahead, locations of processing plants and feed mills will be added. The team behind this initiative will also produce similar maps for other states in the U.S. with significant CAFO operations to demonstrate the enormous impact the factory farm industry has on human health and the environment.