UPDATE: A Senate vote to confirm David Bernhardt for Secretary of Interior could happen as soon as Wednesday, April 10 or Thursday, April 11. ACT NOW and ask your Senators to reject Bernhardt’s nomination whose top priority continues to be undermining environmental protections to help the oil and gas industry’s bottom line. Urge your Senators to insist on a nominee who will represent the public interest and protect our lands, waters, and wildlife for all Americans.

In yet another blatant effort to put former industry lobbyists in charge of regulating industries they previously represented, President Trump has nominated former oil and gas lobbyist David Bernhardt to lead the Department of the Interior (DOI). Bernhardt is already involved in at least 12 corruption-related scandals. As Secretary of the Interior, he will be in the position to serve the interests of his former industry clients by handing over our public lands and oceans to fossil fuel companies.

Act now and ask your Senators to reject Bernhardt’s nomination and insist on a nominee who will represent the public interest and protect our lands, forests, and waters for all Americans.

David Bernhardt has so many potential conflicts of interest that he carries around a list of former clients he is barred from making decisions about. Prior to being appointed by President Trump as DOI’s Deputy Secretary in August 2017, Bernhardt worked for eight years as a lobbyist for oil, gas and mining companies and industrial agricultural interests. His unethical commitment to the interests of his former clients while he was supposed to be acting as a public servant was on display when Bernhardt served as a top Interior official under President George W. Bush, for whom he led a failed attempt to open the Arctic National Wildlife Refuge to oil and gas development.

Since he returned to government service as Trump’s Deputy Secretary for DOI in 2017, Bernhardt  has played a key role in numerous regulatory rollbacks, taking lead on the push to drill in the Arctic Wildlife Refuge, efforts to dismantle Obama-era protections for endangered wildlife on public lands in the West, and to fundamentally weaken the Endangered Species Act. Most recently, during the 35-day federal government shutdown, Bernhardt prioritized his industry allies by continuing to approve oil and gas leases and calling in furloughed Department employees to work on offshore drilling activities. Under Bernhardt’s watch, DOI is also moving forward with adding significant restrictions to its Freedom of Information regulations, severely limiting public access to records that are owned by all Americans.

Perhaps the most glaring example of his conflicted interests is his effort to roll back endangered species protections to enable California agricultural interests to gain access to more irrigation water. Bernhardt’s actions to weaken environmental protections would re-route river water to his former clients, while devastating the San Francisco Bay Delta ecosystem, imperiling dozens of fish species, water birds, orcas, and commercial fisheries, as well as encourage toxic algal blooms.

If confirmed as Interior Secretary, there is no question that Bernhardt will continue to sacrifice our public lands to the Trump administration’s “energy dominance” policies to benefit his former oil and gas industry clients. During the first year of the administration, the total number of acres of public lands that have been put on the auction block for oil and gas leasing has exponentially increased from 2 million in 2016 to nearly 12 million in 2017. As a former Senior DOI official expressed to E&E News: “From what career people tell me, conservation is not part of his vocabulary, and he is totally in the pocket of the extractive industry.”

There could not be more at stake for the health of our public lands and climate. Please reach out to your Senators and ask them to vote against confirmation of David Bernhardt as Secretary of the Department of the Interior. As an ex-lobbyist for the industries that he would be charged with regulating, he will not represent the interests of the American people. Instead, he will put our public lands, natural resources, and climate at serious risk in order to serve the oil, gas and Western water interests of his former clients. 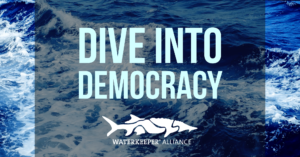 Dive Into Democracy is Waterkeeper Alliance’s roundup of current attacks on America’s clean water protections and how to take action. Want to get them in your email? Sign up here.

Feature image by Bureau of Reclamation