"Dirty Dozen" Calls Out Most Threatened Waters in Georgia - Waterkeeper

“Dirty Dozen” Calls Out Most Threatened Waters in Georgia 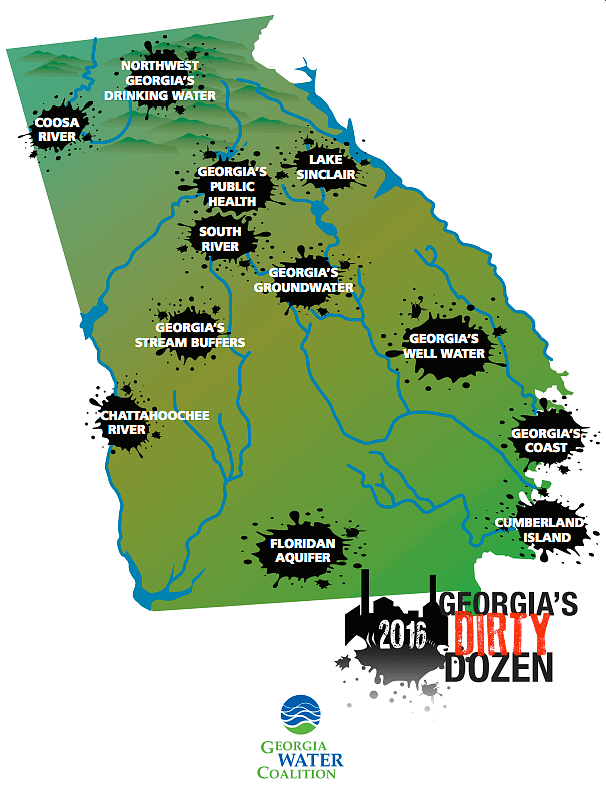 “This year’s report highlights the real, human costs of dirty energy production in Georgia’s communities,” said Joe Cook, Advocacy and Communication Coordinator for Coosa River Basin Initiative.  “Toxic chemicals from coal plants are showing up in groundwater wells and in our rivers while risky proposals for transporting and extracting gas and oil threaten water supplies, wildlife and property rights.”

For instance, residents across the state are concerned about the safe disposal of the pollution left behind at coal-fired power plants. Altamaha Riverkeeper Jen Hillburn is monitoring coal ash storage at multiple sites.  For example, Lake Sinclair is on the receiving end of toxic coal ash wastewater from Georgia Power Co.’s retired Plant Branch. In Jesup and Juliette, toxins associated with coal ash have shown up in groundwater. Despite these threats, the state’s recently adopted coal ash regulations will only require testing of groundwater twice a year at the many facilities storing coal ash.

“Groundwater supplies about 20 percent of the state’s drinking water,” said Emily Markesteyn Kurilla, Ogeechee Riverkeeper.  “For such an important resource, the government has not been serious in protecting it. Our legislators let existing protections lapse, and they have failed to address existing pollution of wells. It’s past time to protect this important water supply.”

Other pollution issues and water supply problems associated with risky energy production are highlighted in the report.  A proposed nuclear power plant in South Georgia is included because it will permanently remove millions of gallons of water from the already over-stressed Chattahoochee River.

Chattahoochee Riverkeeper’s Jason Ulseth says “During times of drought like we are experiencing today, there is a very limited amount of water in the Chattahoochee River basin to meet everyone’s needs. This proposed nuclear plant would consume millions of gallons of water every day that we simply cannot afford to lose from this river system.”

In Southwest Georgia, a federal agency gave a private company the right of eminent domain to build a natural gas pipeline to deliver the commodity to Florida power companies. Flint Riverkeeper and WWALS (Withlacoochee, Willacoochee, Alapaha, Little, and Upper Suwannee River; Waterkeeper Affiliate) contend the pipeline poses a threat to the region’s drinking water while providing no benefits to Georgia residents.

And, in Northwest Georgia the potential for natural gas exploration and the use of fracking techniques has residents worried about their well water.  Coosa River Basin Initiative’s Joe Cook says “Georgia’s 40-year-old oil and gas drilling law does not adequately protect residents from the risks associated with modern drilling techniques.”

“I do not feel that my property, or our community’s water resources, are adequately protected by Georgia’s existing laws,” said Kiki Edmonds, Floyd County resident. “Many people in rural areas are not eligible for city water. Those families rely on well water for drinking, cooking, bathing, cleaning, and crop irrigation. I believe the protection of groundwater is my biggest concern. I’m also worried about our rivers and streams, our landscape, damage to our already worn county roads, air pollution, and, of course, the threat of earthquakes like we’re seeing in Oklahoma.”

From government’s failure to enforce stream protections to legislative deception that takes money from important clean community programs, the issues outlined in this report represent an opportunity for Georgia’s 10 million residents and its leaders to take action to ensure the state’s future generations have enough clean water to grow and prosper.

Coalition members encourage Georgians to speak out on these issues by sharing the report on social media, signing petitions and sending emails. Concerned residents can visit www.protectgeorgia.org to learn more and take action.

The Coalition’s full report details the history of each site and provides solutions to correct these ongoing problems and eliminate the listed threats. The full report—including updates from previous Dirty Dozen reports—is available online.