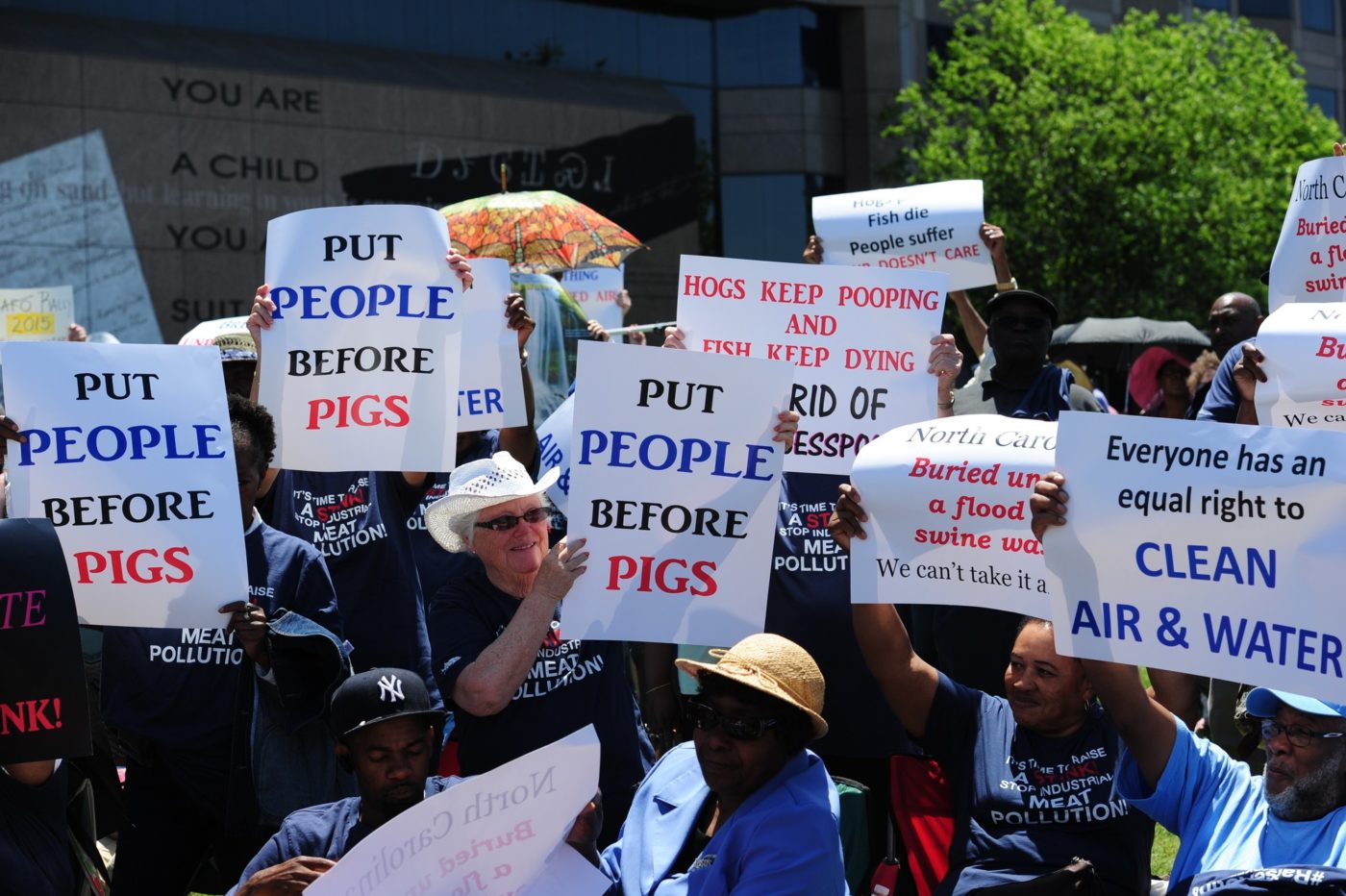 The report, released Monday, was required under a settlement agreement reached May 3, 2018 between North Carolina environmental justice groups and the North Carolina Department of Environmental Quality. The North Carolina Environmental Justice Network, Rural Empowerment Association for Community Help, and Waterkeeper Alliance filed the complaint in 2014 under Title VI of the Civil Rights Act of 1964, which requires agencies that receive federal funds to act in a nondiscriminatory manner.

In the complaint, which was filed with the Environmental Protection Agency, the groups alleged that DEQ’s Swine General Permit allowed industrial swine facilities to operate with “grossly inadequate and outdated systems of controlling animal waste” resulting in an “unjustified disproportionate impact on the basis of race and national origin against African Americans, Latinos and Native Americans.”

The EPA, in a review of the case, found a “linear relationship between race/ethnicity [of residents within 3 miles of industrial hog operations] and…density of hogs” and expressed “deep concern about the possibility that African Americans, Latinos and Native Americans have been subjected to discrimination as the result of NCDEQ’s operation of the Swine Waste General Permit Program.”

After reviewing the report, Naeema Muhammad, Organizing Director of the North Carolina Environmental Justice Network (NCEJN) said:
While the improvements to the Swine General Permit are welcome and necessary, they still do not meaningfully address the equity issues that are at the center of the Title VI complaint. The Swine General Permit is the only state action that continues the use of the lagoon and sprayfield system, which was otherwise banned by the General Assembly in 2007. Our Title VI complaint and DEQ’s report show that that archaic system — no matter how strong DEQ’s regulations or oversight — causes a substantial part of the adverse effects on the health, well-being and environment of people living near operations covered by the General Permit. It must be replaced by the superior technologies that meet the 2007 statutory performance standards, which also apply to digesters/swine waste biogas projects.

The report’s application of the Community Mapping and EJ Tool to Sampson and Duplin counties confirm what we already know from previous studies: disproportionate impacts on communities of color and extensive water contamination. We see these same communities still struggling to recover from the hurricanes from the last five years, while the industrial agriculture industry grows its profits through animal waste biogas and pipeline projects that increase the existing burdens our communities bear.

That the Division of Air Quality’s air monitoring study, referenced in the report, did not show exceedance of environmental law thresholds does not, in our estimation, disprove the lived experiences of people who have to breathe that air daily. The legal standards for air pollution often do not align with what is actually safe or tolerable for exposure, especially for people who have sensitivities or are otherwise compromised. It’s also worth noting that a dozen scientists commented on the study’s flaws.

We are hopeful that DEQ will keep its promise to continue surface water investigation/source tracking and to start groundwater monitoring. However, monitoring and enhanced participation is not the same as enforcement. Our investment is in reducing harm to impacted communities.

Devon Hall, Executive Director, Rural Empowerment Association for Community Help, said:
We appreciate what DEQ has done, but they could have done more.  We know without a doubt that there are superior technologies to the lagoon-and-sprayfield system.  Ongoing use of this system will continue to pollute and destroy our communities, including through the expanded use of methane digesters.

Will Hendrick, Senior Attorney & Manager, NC Pure Farms Pure Waters Campaign, Waterkeeper Alliance, said:
The state report makes clear that DEQ knows it must do more to protect communities — disproportionately communities of color — who live near industrial swine operations. The state acknowledges, for instance, that water quality is worse in watersheds near these operations than elsewhere in the state, and that the pollution causing problems is associated with swine manure. The state commits to tracking the sources of this pollution. We intend to hold them to that.

Under the agreement, which was reached after 13 months of mediation, DEQ committed to new policies to ensure compliance with federal civil rights laws, including a language access program and the development and use of an Environmental Justice tool to examine demographic, health, and environmental characteristics of communities impacted by DEQ policies as a part of DEQ’s regulatory decision-making process.

Rural Empowerment Association for Community Help, North Carolina Environmental Justice Network, and Waterkeeper Alliance are committed to continuing to hold DEQ accountable to the settlement agreement and to DEQ’s broader mission of serving all the people of North Carolina and protecting the state’s environment. The groups are represented by Earthjustice, the Environmental Justice Clinic at Vermont Law School, and the Lawyers’ Committee for Civil Rights Under Law.