The standard for drinking water supply and fish consumption is 10 micrograms per liter; testing from water sampled from the Neuse near the coal ash spills following Hurricane Florence was 186 micrograms per liter. The city of Goldsboro has a municipal water intake less than ten miles downstream from the plant.

The analysis, conducted by Pace Analytical, also found elevated levels of lead and other heavy metals in the water. That analysis can be found here.

The sample with the highest arsenic level came from a grey plume of ash in the river, which had poured over an actively eroding dam made of coal ash. 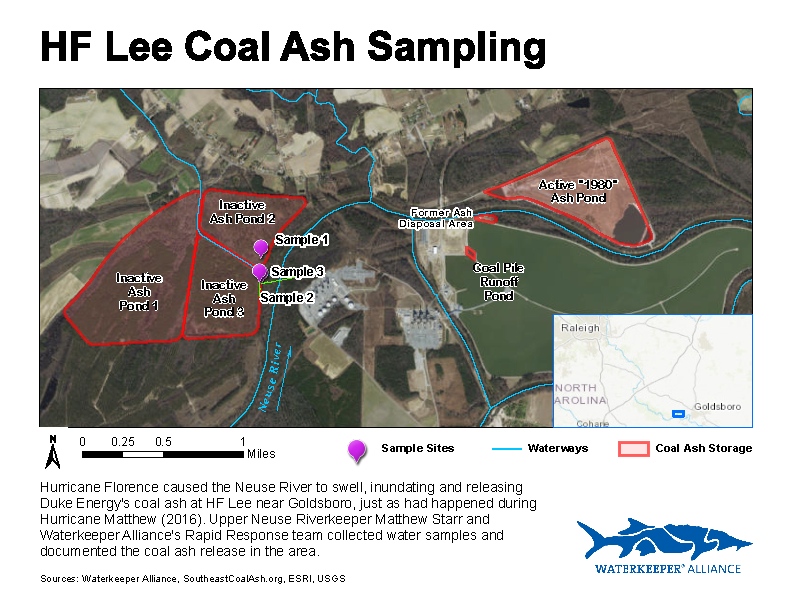 “Duke Energy continues to poison the Neuse River, while hiding behind water samples they collected six miles downstream from the inactive ash basins,” said Neuse Riverkeeper Matthew Starr. “Our sample results, collected where the spill into the Neuse was happening, show that Duke could care less about reporting the truth and will continue to mislead the public until they are taken to task by Waterkeeper Alliance and Waterkeeper Organizations. The levels of arsenic that Duke has dumped into the Neuse through its continued mismanagement of its coal ash are alarming, and every time that Duke misleads the public about the true impact of its coal ash, they put our environment and communities at risk. North Carolinians deserve for Duke Energy to tell the truth and for the North Carolina Department of Environmental Quality to hold them accountable.”

Coal ash is a waste product from coal combustion; it contains heavy metals and other toxic compounds. One million tons of the coal ash stored at H.F. Lee in three inactive ponds were completely submerged by Florence’s floodwaters. Coal ash, the top source of toxic water pollution in the U.S., contains heavy metals such as arsenic, chromium, and mercury.

Duke Energy also sampled the waters of the Neuse, but did so far downstream from the spills. North Carolina’s Department of Environmental Quality documented the spill as the river was receding and collected samples, but has not published its results yet. N.C. DEQ’s photos are here.

The H.F. Lee plant came online shortly after World War II. The plant, which had three coal-fired units, was retired in 2012. Duke Energy owns 32 coal ash basins in North Carolina, all which are either adjacent to or within a half mile of a river or lake. The North Carolina coal ash ponds contained about 111 million tons of toxic coal ash as of August 2017, according to state estimates. There are more than 1,000 coal ash storage sites around the nation, according to EPA.

Even normal rainfalls have led to spills: Duke blamed an October 2017 spill in Cliffside on 3.74 inches of rain. Another spill from Cliffside in August 2016 spilled 15,000 to 50,000 gallons into the Broad River from a coal pile. Another release from Asheville, was caused by what Duke called “severe thunderstorms.”