Were it not for the Chinese police officers following her, Yongchen Wang could be mistaken for a tourist, the way she meticulously documents every moment of her travels with her phone and video camera. But Yongchen is no tourist; she is one of China’s earliest and most successful environmental activists.

That distinction long ago caught the attention of China’s authorities, who closely monitor her activities. But Yongchen is unfazed by the scrutiny. For over two decades, she has steadfastly safeguarded her nation’s waterways and worked with communities that have been adversely affected by the pollution that has accompanied the country’s economic progress.

“[The police] just follow us. They never say no,” she says casually. “But when they follow us they begin to understand what we’re trying to do — that we’re saving nature and their hometown.”

Still, given China’s heavy censoring of media and close watching of the Internet, Yongchen must be ever mindful of how she carries out her work. As she regularly details the environmental costs of economic development along the nation’s rivers on WeChat, China’s most popular social-media platform, authorities are poised to remove any content they deem incendiary, and in certain cases, detain those responsible. But as a former journalist, Yongchen has years of abundant experience deftly navigating China’s unique media landscape.

“I know what it is to be careful,” she says. “I worked at National Radio for 30 years, so I have a good idea of what articles you can publish and what you can’t.”

Growing up in Beijing during the Cultural Revolution, the outdoors had a special meaning for her. Every weekend, her father would take her and her brother to the lake at nearby Yuyuantang Park.

“It was an important time that influenced me,” she recalls. “I became very interested in the rivers, the trees and the birds.”

And when she grew up to be a reporter, her passion for environmental activism was reawakened. It fully blossomed in 1988 when she worked on a story about the trees in Beijing’s Xiangshan Park, where every autumn locals gathered in large numbers to marvel at the changing colors of the leaves. But, she observed, this annual ritual was beginning to take a toll. When she visited the park she saw the trees had been badly damaged by people trampling on the roots, pulling off leaves, and even breaking off entire branches. This sight left a deep impression on her.

“That was the first time I saw nature destroyed, and I realized that it was not only for humans — that we have to share nature with the birds and the trees. It was at that moment I began to think that I could do something to protect the environment through media.”

Yet it wasn’t until six years later, while on a trip to the United States to report on nongovernmental organizations and their place in U.S. society, that she became aware of the important role NGOs played in spurring change.

“I consider it my duty to be a voice for China’s rivers and for the natural world, because, in spite of their enormous importance to China’s future and to the people’s well-being, they cannot speak for themselves.”

“From that experience, I learned that preserving nature requires not only government action, but also public participation,” she says.

So, in 1996, Yongchen founded Green Earth Volunteers (GEV), one of China’s first environmental NGOs, with a mission to use the power of media to raise awareness of environmental issues and spark a broader movement to care for nature in China.

Recalling GEV’s early years, Yongchen says, “At first we just wanted to encourage people to love nature. To spend time in nature and understand it, doing activities such as bird-watching and cleaning up garbage.”

Then, in 2003, Yongchen’s work with Green Earth Volunteers and her personal journey as an activist reached a critical turning point when she learned about the government’s plans to build the world’s largest cascade of dams along one of China’s last free-flowing international rivers, the Nu. Originating high atop the Tibetan plateau, the mighty Nu River flows through China’s Three Parallel Rivers National Park — an ecological wonder that is home to a quarter of the world’s animal species, many of them endangered — to its delta at the Andaman Sea in Burma. That same year, UNESCO declared it a World Heritage Site, stating that it “may be the most biologically diverse temperate ecosystem in the world.” But just one month after the Nu had earned this distinction, China’s government announced plans to dam the river, thereby imperiling it.

“That’s when I grew to have a special concern for rivers,” Yongchen remembers. “China’s biggest environmental problem is dams because, after they are built, the biodiversity disappears. With pollution, you can close a factory, but the dams disrupt nature itself and you can’t bring it back.”

Leaving Beijing’s dense urban landscape far behind, Yongchen repeatedly travelled to the remote stretches of the Nu River to block the dam project by describing the potential devastating impacts on the environment — and on local communities; the Nu River Gorge is home not only to a vast array of wildlife, but also to a third of China’s ethnic minority groups, and the dams threatened to displace over 50,000 people.

Yongchen’s coverage helped shine an international spotlight of the issue, drawing reporters from Japan, the United States, France, and elsewhere to the region. And an even bigger breakthrough came in 2004, when, using contacts she had developed as a reporter, she delivered to then-Premier Wen Jia Bao a memo detailing the ecological importance of the Nu River and the devastating threat of the proposed dams. He responded by halting the project, pending further study of the environmental impacts.

But in the 15 years since Premier Wen’s announcement, state hydropower firms have battled fiercely to dam the Nu, while Yongchen and other environmental activists have resolutely defended the area’s pristine waters. She has regularly returned to the river to document its region’s beauty and the lives of the ethnic groups and their unique relationship to the world that is threatened by the dams.

But the Nu River is not the only waterway in China threatened by dams, and Yongchen has kept a watchful eye on other important rivers that are similarly imperiled. In 2006, she began leading a team of scientists, writers and reporters from major news outlets on an annual journey along the largest tributaries of the Yangtze, an undertaking dubbed “The Decade River Project.” Its goal has been to document the effects of hydropower development on these rivers through the eyes of the people who depend on them for their livelihoods. In 2010, Yongchen launched a second Decade River Project along the tributaries of the Yellow River. 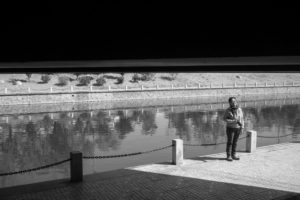 Her experiences along the Nu River taught her that media was just one method of environmental advocacy. So, beyond reporting, she has sought to use every tool at her disposal to protect rivers. One crucial moment was a visit to the United States in 2006, shortly after hearing about the work of Waterkeeper Alliance, to attend her first Waterkeeper conference. There she learned how Waterkeeper groups carried out their work, and how they often used the power of legal action, which she describes as “one of the main pillars of Waterkeeper Alliance’s effectiveness.” It was, she says now, a watershed experience for her. “Many of the members of Green Earth Volunteers were reporters and using legal tools was beyond our expertise.”

Equally important as any new tactic she learned at the conference was a profound realization that she was “not alone on this planet,” that “across the globe there were people like me who weren’t living for money. We were all working for equality and justice.” Inspired by these like-minded activists, Yongchen joined Waterkeeper Alliance and founded Beiyun Waterkeeper, China’s first Waterkeeper organization, under the umbrella of Green Earth Volunteers.

With the support of the Alliance, Beiyun Waterkeeper began monitoring the heavily strained Beiyun water system, which serves Beijing’s 21.5 million residents. The Beiyun program built on Green Earth Volunteer’s weekly river walks, which were intended to connect urban residents to nature – much like Yongchen’s weekly journey to her local lake as a child. But the group also incorporated many of the tactics Yongchen learned through the Alliance, so that now the weekly walks include patrolling the city’s waterways for pollution and illegal dumping and testing for water quality. Whenever illegal activities are found, the group immediately reports them to local government officials, who track down those responsible.

Each morning, Yongchen issues a daily roundup of national environmental news that is widely circulated on social media and has become essential reading for those interested in environmental issues. And, recognizing the power of the Waterkeeper model, Yongchen has played a central role in building a similar network within China to support its nascent environmental NGO movement. In 2010, Yongchen brought together 13 of these groups, several of them Waterkeeper organizations, to launch the China River Watch Action Network, which shares knowledge, coordinates action, and provides mutual support. It has quickly grown to include 66 organizations.

Now retired as a journalist and well into her second career as an environmental activist, Yongchen shows no sign of slowing down. She maintains a grueling travel schedule, spending weeks at a time in China’s most far-flung regions. But she would not have it any other way, for it is a labor of love.

“As an environmentalist,” she says, “I consider it my duty to be a voice for China’s rivers and for the natural world, because, in spite of their enormous importance to China’s future and to the people’s well-being, they cannot speak for themselves.”

Eugene K. Chow writes on foreign policy and military affairs. His work has been published in Foreign Policy, The Week, and The Diplomat.