Recently I met with China’s Qiantang River Waterkeeper Hao Xin at the Massachusetts Institute of Technology in Boston to discuss his work restoring and protecting Zhejiang Province’s environment and its principal river, the Qiantang. Hao Xin is also the vice-president and executive director of Qiantang River Waterkeeper’s parent organization, Green Zhejiang, an NGO that has become one of the most influential water-advocacy groups in China.

If it were a country, China’s Zhejiang Province, home to 55 million people, would rank 24th on the world’s population list. The metropolitan area of its largest city, Hangzhou, alone houses 21 million people. Prior to Hao Xin’s involvement, it suffered from some of the worst water pollution in the country.

Hao Xin’s journey as an environmental activist began 17 years ago when he was a first-year environmental-science undergraduate at Zhejiang University. He was 18 years old, and had the idea to rally a few fellow students to bicycle with him around the province for a month to promote environmental awareness and assess the level of water-pollution in the region. They called their 36-day, 2,000-plus-kilometers ride “Millennium Environmental Protection Cycling” and adopted the motto “I dream; I do.” They found many places where pollution had reached staggering levels. Hao recalls many rivers “with piles of garbage visibly floating in black, foul-smelling water.” He was shocked, and, joined by one of his university instructors, Professor Junhua Ruan, and encouraged by people he had met on his journey, he set out to establish an environmental organization immediately upon his return to university.

Connecting to a growing network of civilian and professional allies, the organization was established in 2002, and grew steadily thereafter. It was first registered as a municipal-level civil-society group, the Hangzhou Eco-Culture Association. In 2013 it received provincial-level status as Green Zhejiang (GZJ). Professor Ruan, who received the seventh National Earth Award in 2003, is currently the president of what has become the largest environmental NGO in the province.

Over the past decade, Green Zhejiang has set up an impressive reach of programs, including ones for environmental monitoring and promotion, ecological community-development, nature education, and environmental and climate-change research, and it has been honored with a wide array of environmental accolades and awards. That’s a lot of success, but when Hao and his colleagues first became involved in water advocacy as university undergraduates, they faced a daunting lack of funding. They were, however, far from short of ideas, and they realized that their greatest challenge would be to achieve deep, long-term systemic change in the region’s environmental practices. Hao Xin remembered those early days and contrasted them to the present.

Hao Xin: “We knew that, if we could not clean the river and make villages more beautiful, all of our efforts would be wasted.

“Today Green Zhejiang is in a state of tremendous growth as an organization. Our network is extensive in the social sector, and we have pushed successfully forward on such key issues as the sorting of waste. The changes we have made already have fused one voice out of the more than 50 million people in Zhejiang Province.”

Like many provinces in China, Zhejiang has seen tremendous economic growth in recent years, and this has helped spread awareness of the need for ecological restoration.

H. X.: “It is interesting to note the relationship between one’s income and the degree of environmental pollution. The more income you have, the more stuff you have, and the more you tend to waste. But then a point is reached where the relationship inverts. That is, as income rises past a certain point, one has enough income to take measures to lower one’s environmental impact.

“Moreover, expectations for environmental protection also have increased. Twenty years ago, people literally would ask, ‘What does it mean to protect the environment?’ Now it’s a topic they discuss over dinner.

“I’ll tell you a funny story. Four years ago, there was a businessman in Zhejiang Province, a private entrepreneur and a member of Green Zhejiang, who went back to his hometown and saw garbage everywhere cluttering the river. So he offered 200,000 renminbi to the head of the Environmental Protection Department to go and take a swim in the river. The man politely declined. People are really starting to care about this issue.”

Nathan Senge: “What would you say to the people in the environmental movement in the United States, especially given that you conducted your graduate studies in the U.S. at Clark University?”

H.X.: “Big issues must be made local. A global concern like climate change must become visible on a human scale, in one’s ‘own backyard,’ where it can be seen, smelled and felt.”

This is why he and his group have taken advantage of the extensive training he received at Clark in geographic information systems (GIS), and created the Live Water Systems map for the Qiantang River, which was based on the nationwide China Water Pollution Map. It can be accessed on any smart phone with the corresponding mobile application, providing fast real-time updates on sources of water pollution throughout Zhejiang Province.

H.X.: “The idea came to us originally 12 years ago, when I first met Mr. Ma Jun, the director of the Institute of Public and Environmental Affairs (IPE).  The goal was to make a map of China’s water pollution, and I was put in charge of its technical development.

“Overnight it caught attention all around the world—Mr. Ma Jun was put on the cover of Time. It was then I realized people were extremely concerned about the geographical location of these ‘pollution spots.’ If people knew they were in their backyard, they took to caring about them. They were scared of what was close by—they cared less about what was far away. The map helped them see that these issues are indeed very close by—it renders something lofty and abstract like ‘climate change’ local and visceral.

“Initially, this map was a one-way thing. It reflected the latest government-fed information, and we published it. But then we realized this would be a much more powerful tool if it became a platform by which everyone could report on nearby instances of pollution themselves. So when I studied GIS at Clark, I learned about the power of open-source geographic information, about updating this map together, as a community, in real time. This technology was successfully piloted in 2010 in Haiti in the midst of the great earthquake. Volunteers poured into Haiti and needed to know where people needed the most help. In response, a GIS-based system called ‘Ushahidi’ was created and applied.”

Hao adopted its design in making the Qiantang River map interactive, allowing citizens to connect to the Environmental Protection Department, which in turn uses the map to find pollution spots and attend to them. The unpredictability of climate change makes such online maps particularly valuable.

H.X.: “This kind of dispersed grassroots environmentalist activity is essential in addressing our modern climatic situation, for indeed core issues like river pollution can crop up anywhere, in one of many forms. One cannot underestimate the power of the citizenry. The power inherent in all of us functioning as live and local climate reporters engaged in a collective endeavor of protecting and cleaning the environment we live in is everything. There is capital power in citizens acting on behalf of their local issues. That is how change mounts on a global scale. It does not come from the top. People on the ground need technological platforms by which they can do this. And that is what we provide.”

Hao believes that there is a critical need in the United States for a platform like this.

H.X.: “The new head of the EPA is a climate-change denier, so there must be grassroots activity, and it must be dispersed throughout the country to take advantage of all these people working diligently on their own local issue. They must have a way to communicate with one another, and coordinate their efforts.”

N.S.: “Are there any qualities in yourself that you have noticed have changed throughout the course of your journey?”

H.X.: “Seventeen years ago, when I organized the bike ride, it was simply because I loved cycling. But in the 17 years since then, I have realized that I am not just living for myself. I work with a group of people with a unified vision, to make deep change possible for the world. I feel self-actualized through this work. And consciously, or unconsciously, I have become a leader for these people. When you become a leader, you take on the responsibility of helping more and more people. You are not persuading them, but softly leading them, helping them change naturally in the way they wish to change already. For instance, lots of my friends used to be environmental polluters, but I got to know them through reporting them to the Environmental Protection Department, and we have since become partners in supporting environmental protection collectively.”

This is a common theme in Hao’s journey—transforming polluters into supporters, a process that is facilitated in China when polluters are allowed to shut down their operations without financial penalty. In fact, Hao often works to ensure that they receive government subsidies when they make that choice.

H. X.: “I’ll tell you another story. Three years ago, I went to a small town near Hangzhou where there was a rubber factory. The village was one of those typical villages where there has been a lot of rapid economic development after the reform and opening up, by which I mean the Chinese movement of ‘Socialism with Chinese characteristics’ that was initiated in 1978 by Deng Xiaoping. Basically, after this point, many farmers did not cultivate their land anymore and now worked in small businesses. These small factories brought heavy pollution to the village, and the rubber factory was a typical case. When you got close to the village, you could smell its pungent odor. So I reported the operator of the factory to the Environmental Protection Department.

“And I don’t know how, but somehow he knew it was me who had done it. So he tracked me down, and we talked, and we actually talked very well. We were both born in the eighties and are of a similar age, and we spoke civilly and had a very nice conversation.

“I discover more and more that you must get to know the heart of your challenger. So that you may empathize, and you may merge.” W 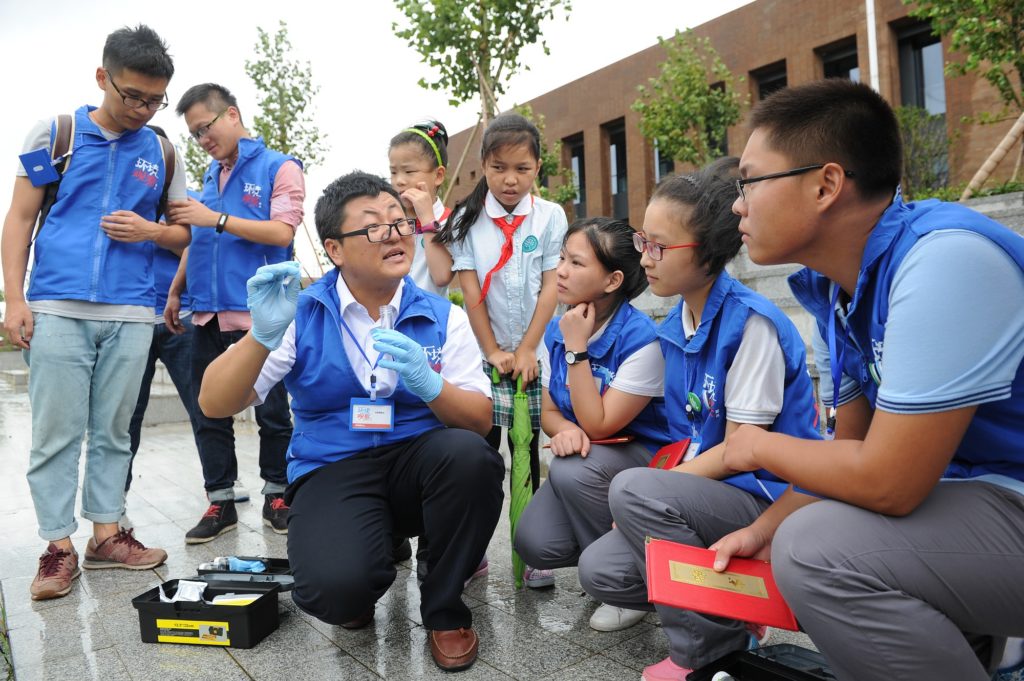