Book Review: Water as Our Planet Intended It - Waterkeeper

Book Review: Water as Our Planet Intended It 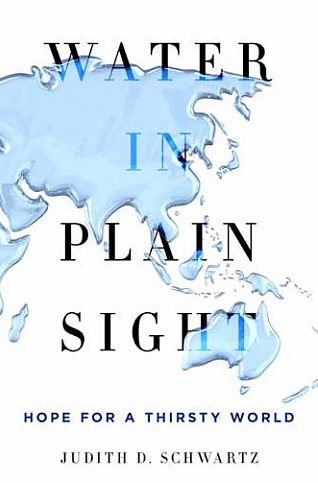 “Water in Plain Sight: Hope for a Thirsty World” is a book about water, of course, but it’s also about some things you might not consider when thinking about earth’s water cycle: solar energy, soil, livestock and bacteria. And it demonstrates that they’re connected to each other, and to us.

At a time when the news is replete with dire predictions about climate change, this timely, important book does, as the subtitle indicates, offer hope. Judith D. Schwartz, a freelance journalist and author, presents evidence, often anecdotal, that the challenges to water that the world faces are surmountable, and that it might even be possible to create a “reverse tipping point” in the course of climate change.

She recognizes that, for far too long, we have abused the earth through deforestation, sprawling development, irrigation practices that can lead to salinization and empty aquifers, and farming practices that may increase yields but, over time, leave us with less nutritious crops, polluted waterways and, eventually, soil that cannot support life. In other words, we aren’t living sustainably. And what we’ve called progress has severely damaged the natural cycles of water and carbon. (Fossil fuels, which have greatly worsened the damage, are only briefly discussed.)

Schwartz takes her readers around the globe, visiting ranchers in Mexico, scientists in Africa, Amish farmers in Ohio, and many other “water innovators” in communities, and, by extension, economies, that have been critically affected by climate change and mismanagement of resources, where groundwater and aquifers have been depleted and deserts have advanced. She recounts stories of holistic management and holistic grazing as important ways to restore soil health – and, in turn, a healthy water cycle – in parched areas of the world. Some of these methods, she concedes, are dismissed by naysayers, but she also records the Mexican rancher Octavio Bermudez’s reaction to them: “Our neighbors are waiting for us to fail so they can say, ‘I told you so.’ Thirty years later, they are still waiting.” Bermudez reports that holistic-management practices have lowered his expenses and increased his profits, and that wildlife is returning to land it once fled.

Schwartz, the author of Cows Save the Planet, repeatedly points in this new book to practices around the world that focus on our early agricultural roots. She reminds us that chemical additives – fungicides, pesticides and herbicides – destroy important parts of the ecosystem, and that damming rivers to support urban growth, and diverting water and storing it in ways nature didn’t intend, alters natural processes and damages the land and, ultimately, us. She explains that chemical applications make plants less efficient and reduce retention of water in natural systems, exacerbating the effects of climate change and drought. Other modern farming practices (some now out of favor), including certain types of irrigation, over-tilling, fallowing fields and baring soil to parching sun, devitalize and under-nourish the crops that feed us.

Many of Schwartz’s sources share similar experiences where, by improving the soil in their arid lands, they also improved the lands’ ability to absorb flood-water and sustain plants. In telling their stories, Schwartz introduces concepts that may be new to her readers, such as: “transpiration” – the passage of water in a plant from its roots through its vascular system and into the atmosphere, where it becomes a part of the greater water cycle; “biological efficiency,” which is described as “maintaining the integrity of soil aggregates, and keeping the ground covered with plants to support the soil-food web and avoid surface evaporation”; “oasification” – bringing back water to desert lands; and “constipated soil,” a term coined by the Amish farmer John Kempf to describe what results when biological processes begins to shut down “and it’s like everything is plugged up and it doesn’t work.”

The book argues that returning to natural processes can restore hydrological function, which, in turn, will “help restore land function and carbon, mineral and solar energy cycling.” Schwartz points out that, “We know so little about how these feedback loops operate. But we can nudge these processes toward restoration.”

Schwartz says that she wrote and published Water in Plain Sight because she “felt that, while people may talk about water – mainly related to drought and floods – there’s been little understanding about water’s connection to climate, biodiversity, land degradation and food security. I chose to highlight those connections, and show that understanding how water works – how it moves across the landscape and through the atmosphere – opens up possibilities for dealing with many of our large environmental challenges. I also wanted to convey that our ultimate water ‘infrastructure’ is the soil.”

As she writes in the book, “Water needs to be a larger part of our conversations about climate, not just in terms of the impact that climate change can have on water – but also the effect that water has on climate.” (Emphasis hers.)

Humanity’s nature-conquering mentality has ignored the intelligence of the earth’s ecosystem. Water in Plain Sight is a call to expand our thinking to include plants and animals as part of the planet’s water cycle, and, further, to emphasize water in solutions to rebalance nature and to save us from ourselves.

Based in Charlotte, N.C., Rhiannon Fionn is an award-winning independent journalist and a filmmaker (“Coal Ash Chronicles”) and author. Learn more about her work at TheWordTrade.com.