You Will Not Dam This Holy River | Preservation - Waterkeeper

You Will Not Dam This Holy River | Preservation

Nepal’s Karnali River is one of the longest undammed rivers on Earth, and Karnali Riverkeeper Megh Ale has devoted his life to making sure it stays that way.

When Megh Ale made his first commercial rafting trip on the Karnali River, he was floored by its grandeur. It was 1991, and the Karnali, in far western Nepal, was virtually unknown among tourists, who gravitated to the eastern side of the country where Mount Everest looms.

“This is the most pristine river we have in our country,” Megh, a veteran river guide and conservationist, told me in a phone call from Nepal. “Looking at the forest and birds — it was so beautiful. The people there had never seen tourists before.”

The Karnali, the longest river in Nepal and the only one that is still free-flowing, is better known now, but just marginally. That is largely due to its remote location, accessible in many places only by footpath. It courses 670 miles (1,078 kilometers) from the Tibetan Plateau in China, down through the Himalayas in Nepal — where it slices through rocky gorges — and across the plains of India, where it meets the mighty Ganges River.

Those who have seen it, and ridden its currents, are part of a small but lucky group. The ethereal color — a pale blue-green —  derives from the glaciers that feed it. Its Class IV and V rapids are considered some of the best in Asia, with names like “God’s House,” “Juicer,” and “Flip and Strip.” And its biodiversity is extraordinary: Ganges river dolphins, crocodiles, and the golden mahseer, a prized sport fish, ply its waters, while Bengal tigers, small brown bears, and jackals roam its banks.

In recent years, however, it has become known for something else — the site of a proposed 900-megawatt dam that would effectively put a giant kink in one of the longest unfettered rivers on Earth. The project would be a so-called “run-of-the-river” dam, in which the water’s flow is diverted into tunnels that descend to a powerhouse where electricity is generated. In the case of the Karnali, the tunnels would cut more than a mile through a mountain, right where the river forms a long switchback. That 44-mile (71-kilometer) bend would become, in civil engineering parlance, “dewatered,” or dried out.

Dorothy Peteet, an adjunct professor at Columbia University’s Lamont-Doherty Earth Observatory, said that drying out such a long stretch of the Karnali River could have a profound impact on plant life there.

“It depends on the geology of the riverbed and what grows alongside it, but certainly you’d lose a lot,” said Dr. Peteet, who teaches a course on wetlands and climate change. “Even things growing on gravel bars like willows would suffer. And that loss would have a tremendous effect on wildlife, too, starting with insects and impacting birds and other animals.”

For Megh, who is the Karnali River Waterkeeper, the dam on the Upper Karnali would sow destruction in every direction. Although the dam’s developer has pledged to release 10 percent of the river’s flow into the bend, Megh said such promises have not been kept at similar dams elsewhere. The Indigenous people who rely on that section of the Karnali for food and fresh water would be forced to leave. The dam would impede fish migration, as well as the movement of sediments and nutrients that nourish the river downstream. One of the legendary rapids on the Karnali, which roils through this bend, would disappear.

For the climate, the project would also spell disaster. While hydroelectric power doesn’t emit toxic pollution like coal or gas, a run-of-the-river dam would devastate the trees and plants in the dried-out portion, both on the shore and in the wider flood plain. That vegetation plays a crucial role in fighting climate change by absorbing and storing carbon dioxide, the main greenhouse gas responsible for global warming. In addition, many more trees would be felled to make way for power lines that would deliver the electricity to markets as far away as India and Bangladesh. Then there are the emissions that would be produced by the manufacture of the dam’s components, as well as during its construction.

With extreme weather on the rise, the entire project would make the Karnali corridor less resilient to floods. The dam itself, which is expected to cost more than $1 billion, could be vulnerable. In early February, a glacier in the Himalayas of northern India suddenly broke loose, unleashing a torrent that decimated two hydroelectric dams and killed dozens of people. Flash floods in the same region in 2013 wiped away whole villages and killed thousands. 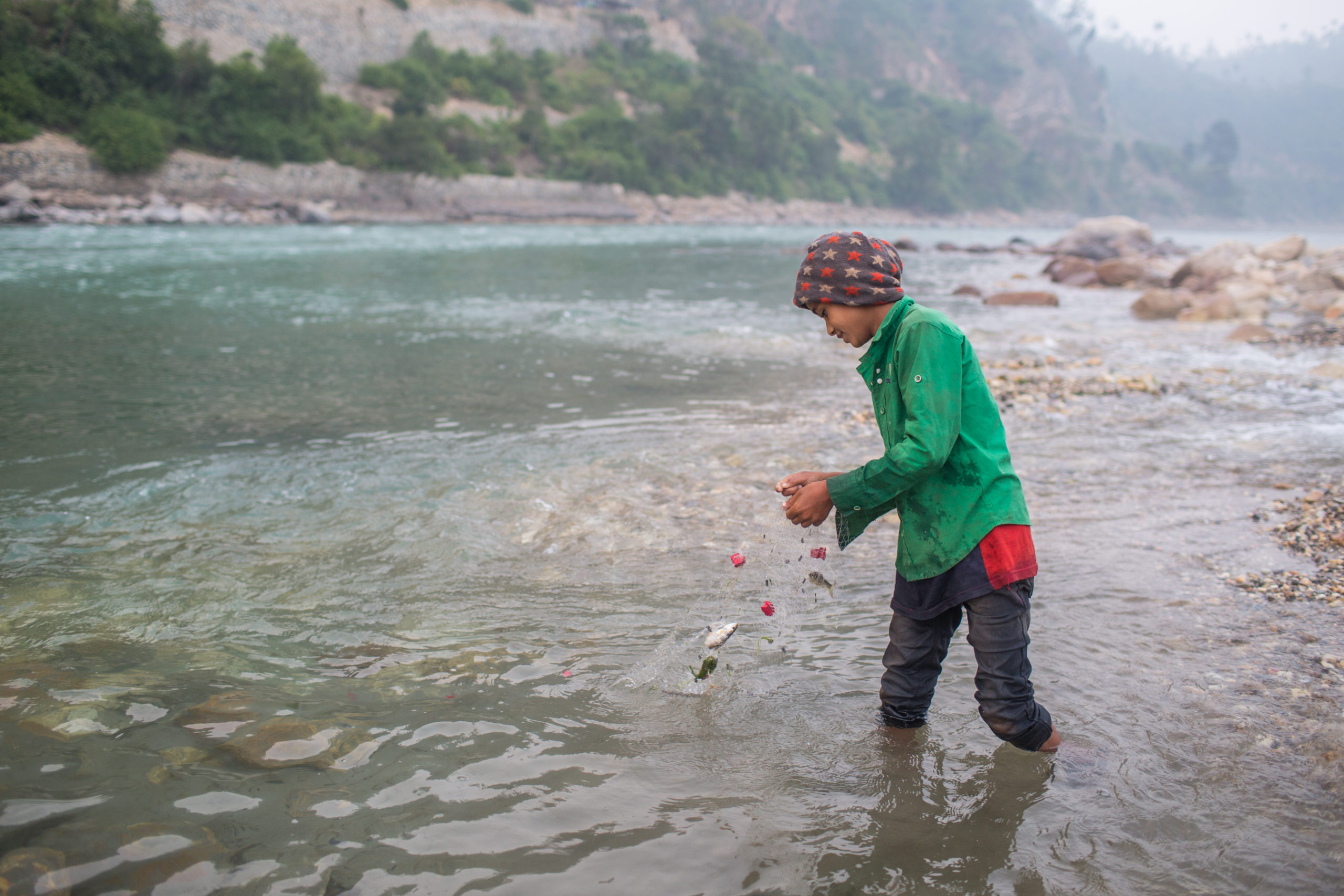 Two other dams on the Karnali River are in earlier stages of development, both south of the proposed run-of-the-river dam. One would generate 426 megawatts, while the other would produce 688 megawatts. The trio are part of a wave of dam projects across Nepal and, indeed, the world.

“Globally, we are seeing a dam-building boom that seems to be driven by the dam construction industry and not always based on an actual need for the power,” said Chris Wilke, the global advocacy manager for Waterkeeper Alliance. “Even worse, hydropower is often touted as a green energy solution. But it is not carbon neutral and it is not sustainable — especially considering the many benefits that living rivers provide. It’s Megh’s goal to keep the Karnali as the last free-flowing river in Nepal and we are proud to support him in that effort.”

A recent study in the scientific journal Nature found that almost two-thirds of the planet’s longest rivers no longer flow freely, and that is mostly the result of dams and reservoirs.

For now, the dam proposal on the Upper Karnali appears stalled. The Indian company behind the project, GMR, got a boost in 2014 when it signed an agreement with the government of Nepal to transmit three-quarters of the electricity to India. But a lack of private and public investment has delayed the project, and a survey license the company had received (the first of three licenses it needs for the dam) has expired, according to Karnali River Waterkeeper. The pandemic has created yet more uncertainty.

That has opened a window for Megh to make the case for a different sort of economy along the Karnali River, one driven by ecotourism and sustainable energy. He envisions a Karnali River corridor flecked with solar panels and wind turbines that harness the planet’s natural resources without harming it. He sees the Karnali as a vibrant travel destination for the growing number of wilderness adventurers.

“In this country, we have many national parks under big mountains like Everest,” Megh said. “We also have parks named for lakes and lowland jungles. But we have 6,000 rivers and rivulets. Why not create a national park to celebrate our rivers?”

In 2018, to draw attention to the Karnali, Megh led a 44-day expedition for a dozen scientists, including hydrologists, geologists, biologists, and anthropologists, as well as activists and filmmakers. They traveled all the way from the river’s source, in the shadow of Mount Kailash (considered sacred in four religions), to its confluence with the Ganges. The scientists made observations, collected samples, and talked to residents who call the Karnali home.

“Globally, we are seeing a dam-building boom that seems to be driven by the dam construction industry and not always based on an actual need for the power.”

The following year, the Nepal River Conservation Trust, which Megh founded in 1995, produced a 101-page report documenting the findings and recommending new conservation laws. Also in 2019, the Conservation Trust chose the Karnali as the site for its third National River Summit during four days in March, with presentations about the hydroelectric plan and alternatives for sustainable development. “We had close to 300 people on the banks of the Karnali,” Megh said.

Last year, Megh had organized a 150-mile (241-kilometer) rafting race on the Karnali in November, inviting teams from all over the world. The pandemic upended those plans, but he has rescheduled the event for 2022.

If the Karnali’s stature continues to rise, as Megh hopes, a tourism industry will be needed to support it. To that end, Megh is working to establish a Center for Ecotourism, which would train local residents in adventure activities like hiking, rafting, and kayaking so that they can become guides. The center, to be built near the site of the proposed dam on the Upper Karnali, would also promote organic agriculture and handicrafts.

“We are working with the river communities, places where the Karnali would be dewatered,” Megh explained. “We are constantly in touch with the residents to make them aware. We can’t say no to the dam and then have nothing in its place. People need help with their lives. At the moment, it’s centered on farming, but most of the time the farming is not good enough, and they leave the country for India and abroad.”

Comparing Nepal with Australia, Megh said there is no reason his country cannot also prosper by showcasing its natural resources. “Australia can afford to have free-flowing rivers, but Nepal is one of the wealthiest nations in the world in terms of rivers,” he pointed out. “If we can still make the country rich without damming this river, why not?”