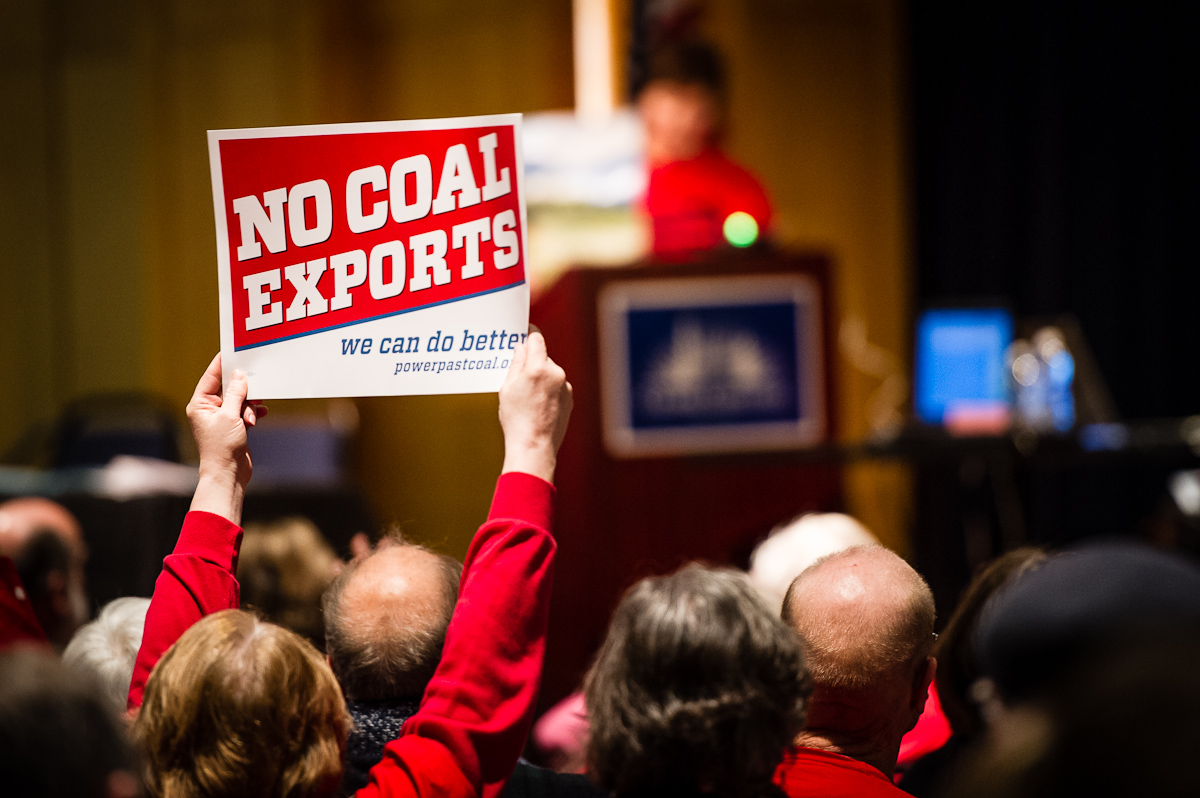 How a Grassroots Movement Fought Fossil Fuel Exports in the Pacific Northwest — and Won.

Over the past decade, thousands of activists have worked together to stop a wave of proposed developments that would transform the region into a coal export hub.

The Columbia River is the aquatic arterial of the Pacific Northwest. It reaches more than 1,200 miles from the mountains of British Columbia to the Pacific Ocean, draining a watershed that extends as far east as Yellowstone National Park. Rich and diverse cultures of Indigenous peoples have stewarded the Columbia Basin for thousands of years, and continue to defend and protect the river’s future. Its wide, steady flow links rural ranching communities and federal lands with tech hubs and fishing communities. Salmon and sturgeon navigate its 14 hydroelectric dams to travel between critical spawning habitat and the sea, while above them, a network of barges, tankers, and trains transports millions of tons of grain from the dry inland west to markets around the world.

But in 2010, Columbia Riverkeeper, based in Hood River, Oregon, got word that the Columbia River might be forced to play unwilling host to an export far more toxic than wheat or corn. “Just two years after negotiating a settlement to shut down Oregon’s only coal-fired power plant in 2020, it’s mind-boggling that Big Coal would think coal export would fly under the radar,” mused Lauren Goldberg, legal and program director at Columbia Riverkeeper.

With the domestic coal market in decline, anxious energy companies had hatched plans to double down on exports, complete with massive new terminals throughout the Pacific Northwest. Millennium Bulk Terminals planned to build a facility in Longview, Washington, that would export 44 million metric tons of strip-mined coal from Wyoming and Montana per year. In Cherry Point, Washington — a sacred site the Lummi nation calls Xwe’chi’eXen — a new proposed terminal called Gateway Pacific would add another 54 million metric tons of new export capacity. Supplying the new terminals would draw an estimated 30 coal trains — about 45 miles worth of uncovered coal cars — through Montana, Idaho, Oregon, and Washington State every single day en route to Asian markets.

The global climate implications were obvious. Coal produces the most greenhouse gas emissions per energy unit of any source of electricity. Shipping it across the Pacific Ocean only enlarges its footprint. The local impacts were also significant. Each rail car could spew hundreds of pounds of coal dust and chunks along its path, polluting air, land, and waterways. The massive length of coal trains also snarled traffic everywhere they went, delaying emergency vehicles and impeding residents’ ability to get around their communities.

Coal trains, by their very nature, are a regional problem. Existing rail lines traversed some of the most sensitive landscapes in the Northwest, including the Columbia River Gorge and Puget Sound. So in 2011, Columbia Riverkeeper became a founding member of the Power Past Coal coalition, which brought together affected communities across the entire coal supply chain, from Idaho to India, to fight the wave of development.

“In my involvement as a citizen activist, I have been inspired by the commitment, knowledge, and passion of volunteers and coalition members in this growing movement in and around the Pacific Northwest. Our motto is: ‘We can do better’ — we certainly deserve better, however, ‘better’ is not free.” – Sandra Davis, member of Columbia Riverkeeper

“What made these campaigns so personally fulfilling to work on was the incredible people that came together to fight for our climate and clean water,” said Goldberg. That included Indigenous people, members of local and national environmental groups, and faith leaders; businesspeople, farmers, fishers, ranchers, and other local residents whose health and livelihoods depended on a future free from fossil fuels.

The coalition adopted a two-part strategy that combined grassroots and legal activism. Legal challenges were often led by Tribal governments, which became a powerful force for change by leveraging their legal status as sovereign nations. “They put their treaty rights on the line and came with their attorneys, elected officials, [and] tribal members to make the case for how fossil fuel development would have devastating impacts on salmon, clean water, and their way of life,” said Goldberg. Grassroots turnout at hearings for even “obscure permits” helped bolster the legal pushback. “It really was this powerful combination of brilliant lawyering and incredible storytelling that ultimately secured this whole series of victories for the Northwest and for our climate,” said Goldberg.

“With so many years of climate inaction in D.C., this is a really empowering way to make a difference in climate.”

In 2011, the coalition notched its first major win: Ambre Energy Ltd., the Australian company behind the Millennium Bulk Terminals, announced it was withdrawing its permit application for the expansion. While the Longview project wouldn’t be dealt a fatal blow until 2017, when the Washington Department of Ecology denied a key water quality permit, the feeling of progress began to build. “Momentum is everything,” said Bart Mihailovich, then the Spokane Riverkeeper and currently the U.S. organizing manager at Waterkeeper Alliance. “Once you get a victory, it’s intoxicating. You want more.”

From Coal to Oil and Gas

More was in store. Oil and liquefied natural gas (LNG) companies had also begun to jockey for a piece of the Northwest coastline. “Twelve years ago, we were fighting liquefied natural gas import facilities,” said Goldberg. But new fracking technology had made it cheaper to extract gas, another fossil fuel in demand in international markets. “Suddenly, those multibillion-dollar import projects turned into export projects,” Goldberg said.

The scale of some of the proposed facilities was truly shocking. In Kalama, Washington, Northwest Innovation Works, a company backed by the Chinese government, proposed a 90-acre fracked gas-to-methanol refinery that would be one of the largest in the world. Direct carbon dioxide emissions for the facility were estimated at almost a million metric tons a year, making it one of Washington State’s top 10 largest producers of greenhouse gas. Taking into account indirect emissions from gas extraction and transportation, that figure ballooned to 4.5 million metric tons each year.

Oil, too, was on the agenda. New crude oil terminals were proposed for Vancouver, Grays Harbor, and Anacortes, Washington, all of which would be supplied by a massive increase in trains carrying explosive oil. Yet the organizing muscle built by Power Past Coal was up to the task. Two new organizations spun off from the existing coalition — Stand Up to Oil in 2015, and Power Past Fracked Gas in 2018 — and the groups continued working together as allies.

The successes began to snowball. Together, the coalitions have celebrated the defeat of over a dozen fossil fuel projects in Oregon and Washington, including the Bradwood Landing Liquefied Natural Gas export terminal near Astoria, Oregon, which called for dredging sensitive salmon habitat and put local communities at risk of spills and explosions; and the Tesoro Savage oil terminal in Vancouver, Washington, which would have been the largest crude oil rail terminal in the country.

The remarkable triumphs have highlighted how even hyperlocal change can have a global impact. Many of the legal “hooks” organizers targeted — permits to contest, hearings where testimony could be offered — were at the state, county, or city level. That made direct action possible in a way that would be unimaginable at the federal level. That many of the wins were notched during the Trump administration made them even sweeter.

“With so many years of climate inaction in D.C., this is a really empowering way to make a difference in climate,” said Goldberg. Even as exporters look to California and British Columbia for paths to the Pacific, Mihailovich is confident the Northwest’s successes have meant less mining, fracking, and drilling in the Intermountain West. “There is no doubt that stopping all these projects has resulted in keeping fossil fuels in the ground,” said Mihailovich.

And still, the work continues. In January 2021, Power Past Fracked Gas celebrated a major permit denial by Washington state’s Department of Ecology for that massive Kalama refinery. While it doesn’t officially kill the project, it likely marks the beginning of the end. “So many people, inside and outside of Columbia Riverkeeper, worked on this proposal for so long, especially the activists who live in Kalama, who would have to live in the shadow of this petrochemical facility,” said Miles Johnson, senior attorney at Columbia Riverkeeper.

“They poured their hearts and souls into this campaign for years.”

“It’s a long road — and not entirely over — but I think we finally prevailed on the state of Washington and Gov. [Jay] Inslee,” Johnson said. “We can’t just keep going on building fossil fuel infrastructure and consuming huge amounts of fossil fuel and pretending we’re also addressing climate change.”