Thanks to a lawsuit brought by Los Angeles Waterkeeper (LAW), the days may be numbered for California’s environmentally disastrous, climate-impacting, and economically costly “pump-and-dump” approach to water planning. This approach requires transporting massive amounts of water hundreds of miles across California and other Western states to places like Los Angeles, to be used once and disposed of through sewage and storm drain systems.

Los Angeles Waterkeeper prevailed in a historic lawsuit against the State Water Resources Control Board in August 2020, when a Superior Court judge ruled that the agency violated Article X, Section 2 of California’s Constitution by not assessing whether recycling hundreds of millions of gallons of wastewater rather than discharging it to the ocean could provide a new source of local water and a viable approach to reducing the region’s water imports.

A Legacy of Waste and Harm

“Whiskey is for drinking, water is for fighting!”, a quote often attributed to Mark Twain, is usually employed to describe the situation in the arid West. For more than a century, a mind-boggling amount of investment has gone into engineering ways to get water from Northern California and the entire Western region to quench the thirst of the ever-growing Southern California metropolises. And nobody has been thirstier than the Los Angeles region, which today encompasses 88 cities and more than 10 million residents (which is more than 41 states).  Titans like William Mulholland and former California Gov. Edmund G. “Pat” Brown became legendary figures for masterminding the Los Angeles Aqueduct and the State Water Project, respectively, that bring water from the once-lush Owens Valley and San Francisco/San Joaquin Bay-Delta to Southern California. Their exploits have been documented in books like “Cadillac Desert”; songs such as Frank Black’s “Olé Mulholland”; plays like “A Mulholland Christmas Carol,” a modern take on the Dickens classic; and, probably most famously, fictionalized as the backdrop of the iconic 1970s Oscar-winner “Chinatown.”

And there can be no disputing that the water provided from these projects has shaped the Los Angeles region, helping make it the third-largest metropolitan economy in the world and serving as the engine for LA’s leading role in aerospace, entertainment, and tourism, to name a few industries. Even today, nearly two-thirds of the region’s water is imported, and that total is closer to 80 percent for the city of Los Angeles. But these massive infrastructure projects have also ravaged the Bay-Delta, Owens Lake, and the Colorado River; have helped contribute to making the water sector the single largest user of electricity in California (and thus a major driver of climate change); and continue to devastate California’s ratepayers as these concrete behemoths start to crumble and need repair. Moreover, knowing we could always rely on an “endless” supply of water from elsewhere meant we never had to truly invest or innovate in local, sustainable, and low-carbon water supplies.

An Opportunity and Bold Action

When first arriving at LAW in fall 2015, I quickly huddled with our board and legal staff as we agreed we wanted to do something bold about Los Angeles’ water waste. During a seven-year historic drought that included the three driest years in California’s history from 2012 to 2014, the LAW team felt the opportunity was ripe to test an obscure, often misunderstood, and largely untested Constitutional provision known as the “waste and unreasonable use doctrine.”

Recognizing the critical role that water plays in California, the state’s constitution since 1928 has mandated that  “the water resources of the State be put to beneficial use to the fullest extent of which they are capable, and that the waste or unreasonable use or unreasonable method of use of water be prevented.”  Historically it has been invoked only in very limited circumstances to prevent upstream water waste from impacting a downstream user, but LAW contended that what constitutes “waste and unreasonable use” must be more expansive considering today’s increasingly strained water supplies — especially as climate change makes California’s water future even more uncertain.

Knowing that “waste and unreasonable use” was going to be the tool, we next needed to decide where we wanted to focus our efforts. San Francisco Baykeeper had success in applying the basis for the reasonable use doctrine — public trust — in limiting sand mining. Following that, Wishtoyo Foundation’s Ventura Coastkeeper program had attempted without success to ensure that recycled water would replace pumping and diversions in overburdened waters. Wastewater discharge from the massive Los Angeles sewage treatment system presented the clearest opportunity yet for the application of “reasonable use” to compel wastewater recycling and reuse.

As massive as the LA region is, it is of little surprise that nearly a billion gallons of sewage runs through nearly 10,000 miles of pipes and is treated at more than a dozen wastewater plants every single day. About 500 million gallons of highly treated wastewater — enough to fill the world-famous Rose Bowl nearly five times — is discharged into our coastal waters every single day, where it serves no use other than to impact our already stressed marine environment. The vast majority of this wastewater runs through two primary systems in the region — Hyperion, managed by LA Sanitation and Environment, and the Joint Water Pollution Control Plant that treats wastewater from 78 cities and LA County. 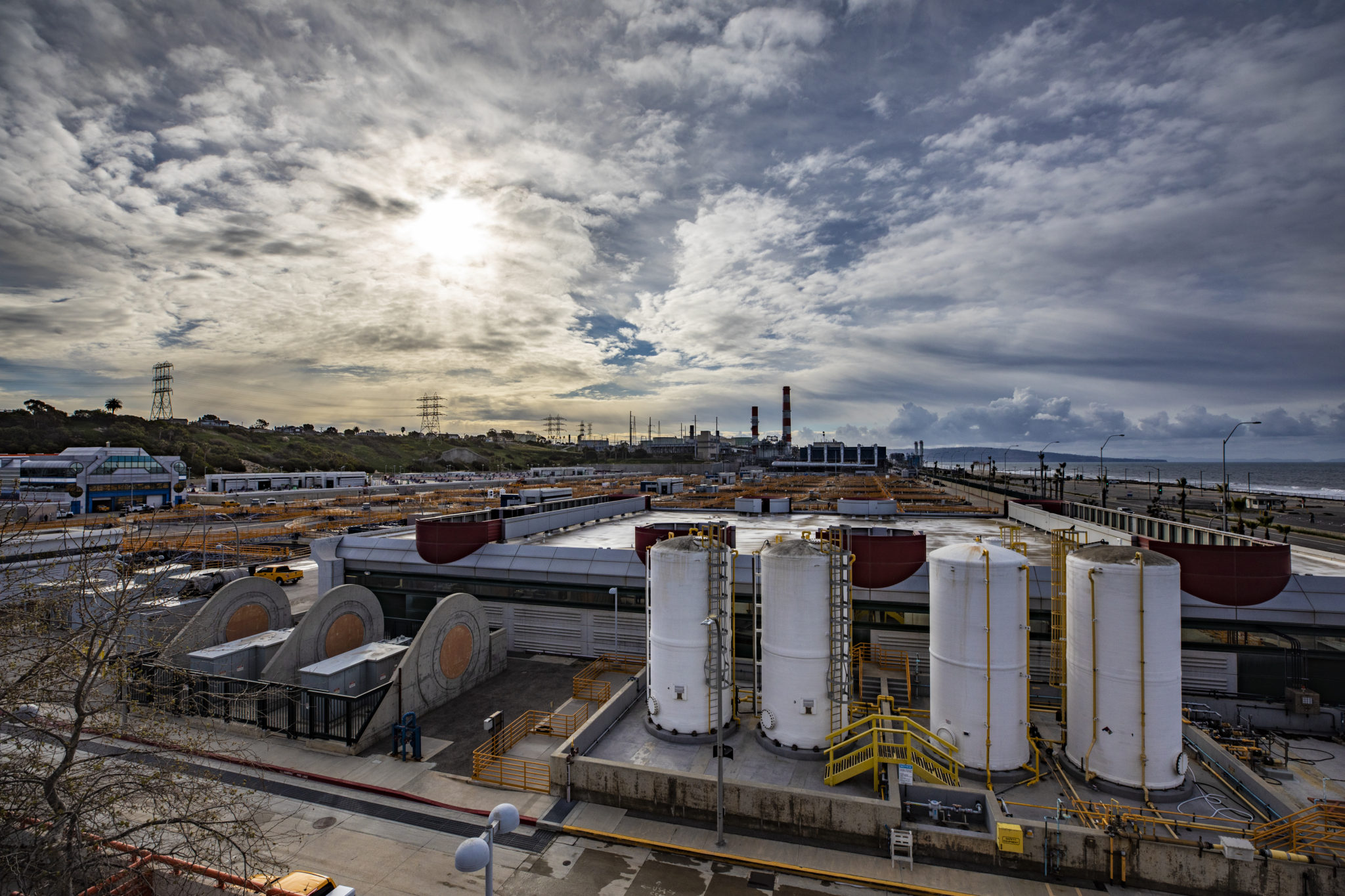 As LAW was considering bringing a lawsuit, the discharge permits for four plants that help make up the Hyperion system — Tillman, LA-Glendale, and Burbank in addition to Hyperion itself — were up for renewal. This was the hook that LAW was looking for in bringing a challenge. Knowing that these agencies were thinking about recycling — but feeling they might need a little extra push to bring these projects to fruition — LAW started making the case that the Regional Water Board that issues their discharge permits, as well as the State Water Board that ultimately affirms the permits,  must examine whether the nearly 300 million gallons a day that these four plants send into the LA River and out into Santa Monica Bay could be better used through purification and recharging our groundwater basins.

After failing to get an agreement from the Regional or State Water Board or the sewage agencies themselves, in September 2017 LAW filed suit arguing that the discharges from these facilities constituted a waste and unreasonable use in violation of the California Constitution.

A Watershed Ruling and What It Means

Filing the suit was, of course, just the beginning. The California Attorney General’s office, which represented the Regional and State Water Boards, threw everything but the kitchen sink at LAW during the three years it took to get the case decided.

But in the end, Superior Court Judge James Chalfant agreed with LAW, finding that “The State Board is the state agency in charge of the comprehensive planning and allocation of water …” and its duty extends to “prevent … unreasonable use of wastewater discharge.” Judge Chalfant then concluded that “Having conducted no analysis, the State Board cannot demonstrate a rational connection between its decision to do nothing to prevent waste and its constitutional and statutory duty to do so,” and ordered the State Water Board to assess how agencies could prevent the waste of such “wastewater” through purification and reuse.

It is hard to overstate how revolutionary this ruling was. Not only was it the first time a judge had found that the duty to prevent waste and unreasonable use extended to wastewater, but it also provided a compelling argument as to how far the State Water Board’s duty should extend.

Judge Chalfant himself recognized this when his ruling noted that “… the State Board has a general, mandatory duty under Article X, section 2 … to assess the four [wastewater treatment plants’] waste and unreasonable use when they discharge wastewater. This is the key issue in this case, and the court acknowledges that no court has ever so held” (emphasis added).

To put it mildly, this ruling has sent shock waves through California’s water world. So it was not surprising that the State Water Board appealed the ruling, joined by the Cities of Burbank and Glendale. To its credit, the City of Los Angeles chose not to join the appeal, as it is already working with LAW and other environmental leaders to dramatically expand wastewater recycling.

In fact, since LAW initiated this lawsuit, Mayor Eric Garcetti has announced plans to recycle 100 percent of the City of LA’s wastewater by 2035. Also, while not part of this suit, a 150 million-gallon-a-day recycling project at the region’s other major wastewater treatment facility, the Joint Water Pollution Control Plant,  continues to move forward, with $30 million having been allocated recently by the Metropolitan Water District of Southern California and Sanitation Districts of LA County to undertake needed environmental review for the project.

A Sustainable, Low-Carbon Water Future for LA and California?

If upheld, this ruling would help the LA region:

As far-reaching as this decision is, though, LAW hopes it is just the beginning. While it applies directly only to the four plants that make up the Hyperion system, it is already helping provide more incentive for all sewage agencies in the LA region to move forward with large-scale water recycling projects that,  when fully implemented,  would provide more than 320 million gallons a day of purified water —  enough to serve nearly 3.5 million Angelenos. Moreover, we envision these requirements applying to major wastewater facilities throughout California.

However, wastewater reclamation is just one part of LAW’s strategy to make LA’s water supplies more sustainable, climate-friendly, and cost-effective. LAW has long advocated for a four-part approach to water planning: Reduce (water waste), Reuse (treated urban and stormwater runoff), Recycle (wastewater) and Restore (contaminated groundwater). If upheld, Judge Chalfant’s ruling could open the door for similar challenges in these other areas where agencies throughout California are not doing enough to prevent water waste.

Ultimately, Judge Chalfant’s courageous ruling is a victory for Los Angeles; a victory for California and the West; a victory for more holistic water planning and a sustainable water supply for our future; and a victory toward climate resilience and a green economy. LAW is proud to have been at the center of this groundbreaking decision, and we thank all our attorneys who worked so hard on this case, and everyone who provided funding and other support for this massive effort.

Click here to support Los Angeles Waterkeeper’s efforts to defend this decision on appeal, and to help us ensure safe, healthy water for all Angelenos.