The Bahamas oil spill during Hurricane Dorian contaminated water in critical wetland habitat, including an area more than one mile away from the spill, according to sampling done by Waterkeepers Bahamas, Save the Bays, and Waterkeeper Alliance. 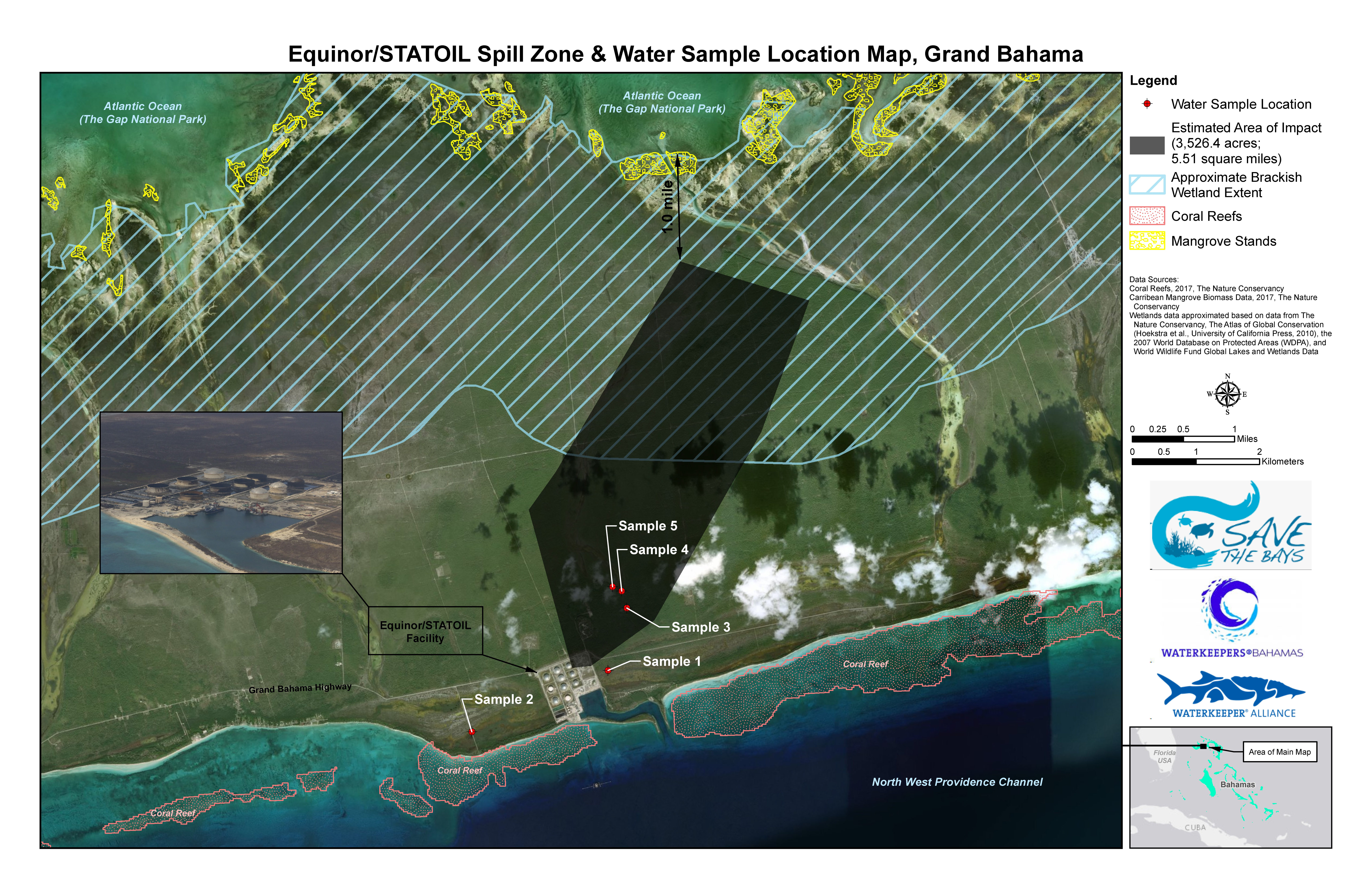 “These results are well beyond what would be naturally occurring,” said Christian Breen, field investigator for Waterkeeper Alliance. “The sample profile is distinct and consistent with the makeup of heavy-grade fuel oil, which is not supposed to be there.”

The affected wetlands provide a vital ocean buffer for Grand Bahama, as well as habitat for migratory birds, such as the West Indian woodpecker and red-legged thrush. The wetland also provides a critical cleansing mechanism for the island’s scarce groundwater.

Equinor, formerly known in the Bahamas as STATOIL, held 70 million gallons of oil at its storage site on Grand Bahama. Hurricane Dorian, which hit the Bahamas starting Sept. 1, blew off the tops of five oil storage tanks at the site. Save the Bays and Waterkeeper Alliance determined during a post-storm site visit that the spill thoroughly polluted the ground of at least a four-square-mile area that includes wetlands, pine forests, and mangroves.

“We witnessed dozens of workers cleaning up the massive amount of oil at the spill site,” said Joseph Darville, Grand Bahama Coastal Waterkeeper and Chairman of Save The Bays. “There were trucks vacuuming the oil and pumping it into tank trucks. We witnessed workers knee-deep in oil. Not only are these conditions unsafe for workers, but the haphazard and superficial cleanup we witnessed will not be adequate to protect the sensitive pine forest and wetlands threatened by this spill.”

“Freshwater is a scarcity in the Bahamas,” said Rashema Ingraham, executive director of Save the Bays and Bimini Coastal Waterkeeper. “The islands in the north are covered in pine forests, which capture rainwater in underground lenses. The pine forest near the site was completely affected by this spill. When you look at the connectivity of these ecosystems, it’s scary. My short-term concern is for the wildlife in the area, including blue crabs, fish, and native boa constrictor snakes. My long-term concern is about the safety of that freshwater supply.”

Pete Nichols, organizing director at Waterkeeper Alliance, said, “Equinor is a Norweigan company; this spill should be cleaned up to at least Norweigan standards. We call on Equinor CEO Eldar Sætre to ensure that the site is left as clean as it would be had this spill taken place behind his home in Norway.”

The environmental groups call for a comprehensive impact study to quantify the impact of the spill, to properly identify all impacted areas, and to guide remediation efforts.

Equinor agreed on Tuesday to planned monthly visits to the site from Save the Bays. The company also gave Save The Bays and Waterkeeper Bahamas a tour of the facility and impacted area earlier this month.

A map and photos of the oil spill site, as well as Save the Bays and Waterkeeper at work in the Bahamas, can be found here.

Feature image: Roofs blown off five oil storage tanks on STATOIL/Equinor storage site on Grand Bahama. (One of the tanks was without a roof before Dorian.)