Scott Pruitt is unfit to serve as EPA Administrator - Waterkeeper

Scott Pruitt is unfit to serve as EPA Administrator 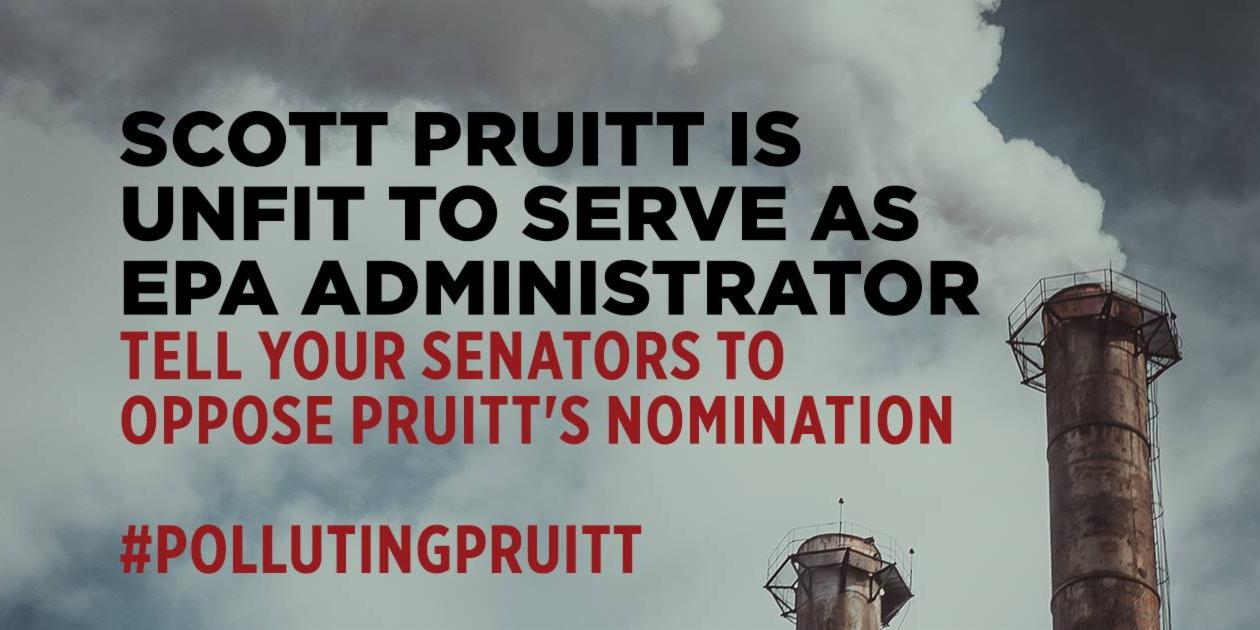 Waterkeeper Alliance Senior Attorney Kelly Foster spoke as an expert witness on a panel discussion held last Tuesday by Senate Democrats on the United States Senate Committee on Environment and Public Works (EPW) regarding the nomination of Scott Pruitt for EPA Administrator. As the former Environmental Protection Unit Chief in the Oklahoma Attorney General’s Office, Ms. Foster highlighted specific actions in Pruitt’s past that show that he misrepresented his environmental record and has little regard for the enforcement of environmental laws. By consistently providing evasive, misleading, and incomplete answers to questions during his testimony, Pruitt provided ample evidence that he is unfit to head the U.S. Environmental Protection Agency and will not protect Americans’ health, air, lands, waters and climate.

Pruitt’s predecessor in the Oklahoma Attorney General’s Office, W.A. Drew Edmondson, prioritized his responsibility and authority to enforce environmental laws and filed myriad cases to protect the public interest. Within the Attorney General’s office, Edmondson created an Environmental Protection Unit (EPU) that was staffed by four Environmental Attorneys and a Criminal Investigator. This specialized expertise allowed the unit to investigate and prosecute civil and criminal violations of environmental laws, take legal action when necessary to protect public health, address pollution from swine, dairy, and poultry CAFOs, and clean up legacy pollution at industrial, nuclear fuel cycle, and mining sites across the state.

Soon after taking office, Pruitt shut down the EPU and replaced it with a “Federalism Unit” that, instead of enforcing environmental law, filed or joined multiple lawsuits against EPA in an effort to block environmental law enforcement. This new unit pursued the interests of industrial polluters instead of enforcing Oklahoma’s laws that were designed to protect Oklahomans’ air, lands, and waters and the health of its people. Pruitt simply cannot be allowed to sell out the public interest in favor of short-term corporate profits as Administrator of the EPA.

Public records and testimony at the above-referenced panel discussion reveal that Pruitt’s dismantling of the EPU has left Oklahomans vulnerable to the actions of companies and individuals that endanger public health and safety by egregiously disregarding environmental laws. Prior to its closure, lawyers and staff in the unit helped create and run the Oklahoma Environmental Crimes Task Force (OECTF) with state and federal agencies to identify, investigate and prosecute environmental crimes. From 1997 to 2010, the OECTF conducted 142 criminal investigations resulting in 56 cases filed by state or federal prosecutors, individual convictions on 110 felony and 21 misdemeanor counts, and corporate convictions on 10 felony and 3 misdemeanor counts. The criminal sentences included more than 28 years of jail time and $8 million in fines. Based upon our review of public records, it does not appear that Pruitt has continued the work of the OECTF or filed a single environmental criminal case. His failure to carry out this responsibility endangers Oklahomans because such serious criminal violations obviously did not simply cease when he assumed his office, and they tend to present the most severe threats to human health and the environment. For example: dumping hazardous waste on public roadways or discharging hazardous waste into Oklahoma City’s sewer system. Working with the Department of Justice, EPA is responsible for enforcing federal environmental criminal laws, and Scott Pruitt has demonstrated through years of inaction and malfeasance that he will not carry out this law enforcement responsibility as EPA Administrator.

Scott Pruitt took no action to address the record-breaking number of earthquakes in Oklahoma caused by oil and gas wastewater injection and fracking despite the severe impacts the earthquakes were having on Oklahomans. Instead, several Oklahoma citizens were forced to pursue the responsible companies through private lawsuits. When Senator Bernie Sanders asked during the EPW confirmation hearings whether Pruitt had taken any action to address this problem during his confirmation hearing, Pruitt stated that the issue was not under the jurisdiction of the Attorney General. That’s patently false, as the Attorney General has clear authority and responsibility for taking action when “the interests of the state or the people of the state are at issue,” and has a number of specific responsibilities with regard to enforcing Oklahoma laws applicable to the oil and gas industry.

The substantial reduction of phosphorus pollution in the Illinois River watershed actually resulted from Oklahoma’s adoption of a numeric phosphorus standard for the Illinois River in 2002, and actions taken by Pruitt’s predecessor, W.A. Drew Edmondson and the Oklahoma Secretary of Environment, including a 2003 agreement with Arkansas to implement Oklahoma’s phosphorus standard in the permits of five Arkansas wastewater treatment plants. As a result of this Agreement and the filing of a lawsuit against the poultry industry by Edmondson, $300 million was expended on wastewater treatment, up to 85% of the poultry waste is being exported from the watershed, and water quality in the Oklahoma portion of the Illinois River Watershed has improved substantially. That 2003 Agreement required those wastewater treatment plants to implement additional controls to fully comply with Oklahoma’s standard starting in 2012, which would have resulted in even more water quality improvement for Oklahoma if Pruitt hadn’t interfered.

But in 2013, Pruitt let Arkansas out of complying with these provisions of the 2003 agreement with Oklahoma. In his testimony before the EPW, Pruitt tried to justify this by stating that prior to his agreement in 2013, “[t]here was actually no enforcement of the .037 standard taking place on Arkansas’ side of the border” and that “[t]hat had never taken place in history.” But this was also untrue. In 2009, the U.S. EPA required Arkansas to enforce Oklahoma’s 0.037 standard in a Clean Water Act discharge permit for an Arkansas discharger, and Arkansas did so on October 7, 2009 by placing a 0.1 mg/l limit in that permit that became effective on July 1, 2012. Making matters even worse, Pruitt did nothing to continue Oklahoma’s pending lawsuit against Arkansas poultry companies to enforce laws that prohibit their pollution of the Illinois River, calling it “regulation by litigation.”

If Scott Pruitt, in his capacity as Oklahoma’s Attorney General, has repeatedly let out-of-state polluters and campaign contributors off the hook for their ongoing damage to Oklahoma’s cherished scenic rivers, why would anyone think he won’t sell out the American people as EPA Administrator?  Pruitt has repeatedly provided evasive, misleading, and incomplete answers to questions regarding his qualifications, and has repeatedly made false claims about his environmental record. He has proven that he does not base policy decisions on sound science, seriously enforce environmental laws, and prioritize protecting the air, water, and health of current and future generations. He is unfit to run EPA.